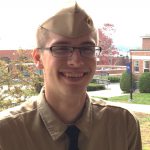 What has been your favorite class at MMA?

My favorite class so far has to be Engineering Design. The class is a whole lot different than anything I took during high school, and Professor Smith always keeps it interesting. The class is also incredibly practical and hands on as it doesn’t just tell us what the design process is like as an engineer, it shows us. I get to partake in it, and the weight of it is on mine (and a few classmates’) shoulders, which I personally enjoy. It is a nice introduction to what it means to be an engineer, and I look forward to having more classes similar to it in the next 4 years.

What do you love about the MMA community?

One thing that I love about MMA is how much everyone cares about not only the school, but everyone in it. From the ladies in the bookstore to the workers on the dock, I haven’t met a single person who seems anything but happy to work here. Some people here have an almost supernatural ability to remember your name. The people here just make you feel at home, even if you’re from far away.

What are your hopes for the future?

My hopes for the future are to get more involved in the MMA community. There’s a lot of things to do on campus. I’m planning on joining a few clubs that I don’t really have back home, like Ski Club and Schooner Crew.

Why did you pick MMA?

I’ll admit that at first I was a little skeptical. I knew that I wanted to go into marine engineering at a maritime academy, and after crossing California and Texas off my list, I was down to SUNY, Massachusetts, and Maine. During my spring break that year, my family and I decided to go on a tour of the three remaining schools. Since we were heading up the coast, Maine was last. Even during the trip I was pretty certain I was not going to like Maine. The long drive up from Mass also wasn’t helping its case. However, once I got here, something just felt right. Everyone seemed genuinely interested not only in their classes, but their school as well. Everyone who was here wanted to be here, and the faculty wanted them there. It was at that moment that I realized that this was where I wanted to go.

What would you say to a prospective MMA student?

Visit! It may be a long drive, but there is a very good chance you’ll be sold once you come. Honestly, it was at the bottom of my list until I came here and physically visited. Once I arrived, I don’t think it was even an hour after I got here that I realized that this was where I wanted to go. There’s something about this place that you just have to be here to feel, and I would hate for anyone to miss a great opportunity at a great college because they never took the drive.

We offer over 30 student organizations for students to get involved while at MMA!

Find one for you today >>