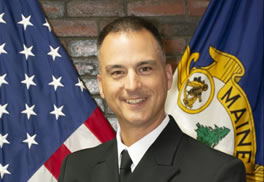 I am the company officer for Bravo Company as well as Band Company. I also teach Personal Development to Midshipmen Third Class. I have been in the Mariner family since 2018 and am most rewarded by the opportunity to guide and mentor young men and women who aspire to lead.

My wife and I live in Bangor, Maine where we have raised two daughters and two sons. I’m retired from the Maine State Police, have been a professional firefighter/EMT-I, and served in the United States Marine Corps infantry. One of my favorite campus extras is as a volunteer assistant lacrosse coach.

My favorite aspect is the Mariner family. It’s a real thing.

Outside of my duties at Maine Maritime Academy, I officiate Maine High School lacrosse and occasionally play the bagpipes.

In Gettysburg, what interests me in particular is the example of Joshua Chamberlain’s sincere compassion and character as he takes care of those in his charge. He was a tremendous and inspiring communicator. Finest Hours is based on the true story of Coastguardsman Bernie Webber and the crew of motor lifeboat CG 36500. It is a tremendous story of leading from where you are by courageous men driven by sense of duty and loyalty. The example is seen not only from the USCG crew but also the crew of the SS Pendleton.

My family has three cats and a dog.

I love South!: The Story of Shackleton’s Last Expedition 1914-1917 by Sir Ernest Shackleton. It is a most vivid example of leadership during crisis by a man who was widely known for his regard for those in his charge. Stranded on Antarctic ice and seas for over a year and a half, Shackleton (also a merchant officer) lead every one of his expedition crew to rescue so that all survived.