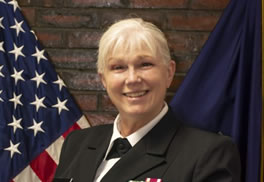 I joined the Marines right out of high school and spent 22 years doing a number of diverse jobs. I started my career as a baker, working in the mess hall at Camp Johnson, which is a subsidiary base of Camp Lejeune in North Carolina.

After a couple of years of that, I was able to obtain a lateral move to the Public Affairs field and became a photojournalist. I loved being a beat reporter, and as I moved from base to base I also became responsible for community relations, media relations, and was the editor of the Flight Jacket, the base newspaper for Marine Corps Air Stations El Toro and Tustin in southern California. I also worked closely with the Los Angeles Public Affairs Office to help in the production of several movies with Marine Corps involvement, as well as with J. Walter Thompson, the Marine Corps’ advertising agency, in the production of recruiting commercials and materials. I then became the Public Affairs representative on independent duty for several Marine Reserve units before being selected to become a Career Planner. In this capacity, I helped Marines to reenlist, ensuring they received bonuses and incentives if they were eligible. I was then selected to become an Administrative Chief, and on my selection to Master Sergeant, was moved to the Manpower Information Systems Support Activity in Kansas City, MO, where I was a manpower and software analyst, writing changes to the Marine Corps Total Force System – its proprietary, integrated manpower and pay platform. Following my retirement, I was fortunate enough to be hired back as a civilian employee, doing the same job. I spent another six years there before becoming a technical writer for PepsiCo in Plano, TX, developing users’ guides for different versions of their proprietary, customizable invoicing software.

I returned to Castine permanently in 2017, partly to help my folks, and found my dream job here at Maine Maritime Academy with the Regiment. My son is currently serving in the Marines as an air traffic controller, so I still get to live the Marine Corps life vicariously through him, and several other members of the Commandant’s Staff team are also former/retired Marines, so I get my dose of camaraderie every day. I believe I’ve found my perfect niche in the world here at MMA!

I love being part of the Commandant’s Staff team, having the opportunity to mentor and guide Midshipmen, and cruising with them aboard the State of Maine. The enthusiasm the Midshipmen have aboard cruise is contagious!

I am a gamer. I’ve been playing World of Warcraft for about ten years, and play Dungeons and Dragons remotely every Sunday evening with my adult children over Discord. It’s a great way to keep in touch with all of them and spend some fun, quality family time, even though we’re all far apart geographically.

It’s really tough for me to single out movies, because I really enjoy so many genres. Some of my favorite include It’s a Wonderful Life, Full Metal Jacket, and Airplane, all for different reasons! But for future Merchant Mariners, there are a couple I would recommend:

Two dogs and a cat live with me. Sully is a rescued lab/basset mix; Digby is a rescued English pointer; and Bumble, my rescued cat, is a formerly feral guy who, when just a kitten, found me early one morning at the parking garage at PepsiCo in Texas. He quickly discovered that life indoors, with two canine companions and a warm lap, is far preferable to scrounging for meals in a dumpster in the rain. Together, they are a bonded team and in the afternoons when I get home, all three come running down the hall!

This is even harder for me than picking movies to showcase! I love a good murder mystery (Elizabeth George is a favorite in that genre) but I also love biographies. I think if I had to pick just one to recommend, it would be Patton: A Genius For War by Carlo D’Este. Patton was an underachiever early in life, who managed to distinguish himself through his sometimes mercurial leadership. He was a complex individual and arguably key to winning the war in Europe. This is such a well-written book that I read it twice!