Since its founding in 1941, Maine Maritime Academy (MMA) has been a leader in Science, Technology, Engineering, and Mathematics (STEM) education.  Today, MMA has the distinction of being the State of Maine’s only institution of higher education where the majority of its graduates major in a STEM discipline.  Guided by a philosophy of “hands-on” learning, MMA has long established a sterling reputation in the shipping and power industries.  But more recently, MMA graduates have also started to become noticed in the ranks of numerous, diversified high-technology companies, the halls of research and development, academia, and senior policy-making organizations within the U.S. government. With each year, more and more of our students are applying – and being accepted – into our nation’s top graduate schools.  High-tech enterprises and laboratories, first accustomed to inviting only interns from well-known research universities, are now actively seeking MMA students who exhibit a powerful synergy of theoretical knowledge with practical “hands-on experience.”

And what this reflects is our own unique brand of STEM – one that effectively integrates the four components, and overcomes the limitations of the traditional “siloed” approach.  In fact, MMA has refined this technique long before STEM became a “buzzword” and a national priority.

As one part of our STEM outreach efforts, MMA is involved in teacher training.  During the summer of 2012, we organized a conference whose theme was “Alignment of Mathematics and Science with Career and Technical Education.”  The rationale for this selection was guided largely by the findings of the recent National Academy of Engineering  (NAE) report on K-12 pre-engineering education.  There, the NAE was unequivocal in its conclusion that mathematical modeling and scientific inquiry were the “weakest threads” in pre-engineering and technical education.  Moreover, the NAE highly recommended that 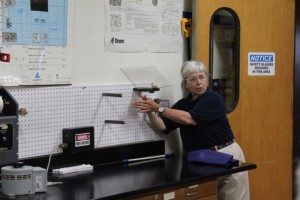 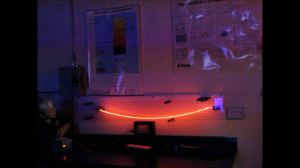 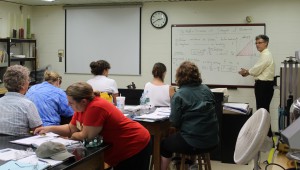 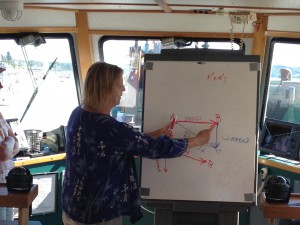 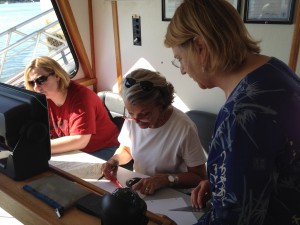 To expand the STEM pipeline in Maine, MMA offers a number of its college courses – tuition free – to qualified high school juniors and seniors.  During the Fall 2013 semester, MMA’s calculus-based physics course was broadcast to three area high schools via the Internet.  Complementing this distance-based learning approach was a weekly laboratory session held on the MMA campus.  In the Spring 2014 semester, MMA has unveiled its first engineering STEM class, which teaches the rudiments of engineering through the practical fields of heating, ventilation, air conditioning, and refrigeration.

The exciting work of MMA’s Marine Engine Testing and Evaluation Laboratory (METEL) should not be the sole domain of a recondite group of researchers.  MMA’s STEM program serves as the liaison of METEL to Maine’s K-12 population as well as to the general workforce.  Our mission is to organize future teacher training programs, as well as summer student programs, around the technological developments of METEL.  Articulating the significance of METEL’s work to the general public will also serve as a major part of our future STEM activity.