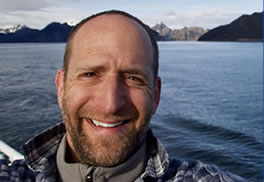 Steven Baer is an Assistant Professor of Marine Science in the Corning School of Ocean Studies. He was appointed to Maine Maritime Academy's faculty in 2018.

Steven received his Ph.D. from the Virginia Institute of Marine Science and B.A. from the University of Massachusetts, Amherst. His research interests focus on the interplay between phytoplankton diversity and biogeochemical cycles. In his spare time, Steven enjoys reading, outdoor adventures, and being with family.

I’m an Assistant Professor of Marine Science in the Corning School of Ocean Studies. I teach Introductory Chemistry (for non-majors), Organic Chemistry, and Marine Geochemistry (now Chemical Oceanography), along with departmental seminars.  I am in the process of developing a Global Environmental Change course for Ocean Studies’ new major in Coastal & Marine Environmental Science.  I serve as an instructor and advisor for students’ independent senior research projects.  Additionally, I have a prominent role with Mariner’s Athletics, as the Faculty Athletics Representative, an NCAA mandated position to help bridge the gap between academics and athletics to ensure a positive and enriching experience for our student-athletes.  Similarly, I am the Faculty Athletic Mentor for MMA’s women’s lacrosse team (Go Mariners!).  In the past, I have taught chemistry and oceanography at The College of William & Mary, Christopher Newport University, and while a postdoctoral scholar at the Bigelow Laboratory for Ocean Sciences, with students from Colby College.  Additionally, I was an instructor for the KellerBLOOM program, which is an intensive, hands-on, week-long marine science program for high school juniors in the state of Maine.

My background is in marine biogeochemistry and chemical oceanography and my research interests are focused on the interactions between phytoplankton diversity and major macronutrient (carbon, nitrogen, phosphorus) cycling.  I have extensive experience with wet lab and autoanalysis techniques for nutrient chemistry, along with being a highly advanced user of both imaging and high-speed sorting flow cytometry.  I have run more chlorophyll analyses than I can count, and it was once calculated that I have identified (actually, killed) more than a trillion individual phytoplankton.

Most of my shipboard experience is in the “blue” open ocean and the polar regions.  I have participated in numerous research expeditions all over the world.  I have experienced Arctic winter night at -70 degrees, heavy weather in the North Atlantic, and the doldrums of the equatorial Indian Ocean. During the summer of 2018 I cruised in the Bering Sea with the Arctic Shelf Growth, Advection, Respiration and Deposition Rate Measurements (ASGARD) project before beginning teaching at Maine Maritime Academy. You can read about my adventures and learn more about the mission of this cruise by reading the blog.

I love going to work at sea, and I love science.