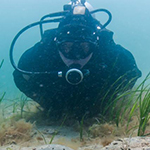 I started working for Massachusetts Bay Lines in Boston as a Mate, Naturalist and Captain for several summers (2000-2004) and was on their vessel maintenance crew during the winters. I left MBL and started working for Nekton Dive Cruises as the captain of the R/V Chachalot for about 180 days until the company started having serious financial issues and I returned to MBL. In 2006 I joined the NOAA Commissioned Officer Corps and have been working here ever since. I started my NOAA Career as a Junior Officer on the NOAA Ship Oscar Dyson and moved on from there to command the R/V Gloria Michelle for the Northeast Fisheries Science Center in Woods Hole, MA. After the Gloria Michelle I became the Deputy Chief of the Ecosystems Survey Branch and Northeast Marine Facilities Manager, again all in Woods Hole. I returned to the NOAA Ship Oscar Dyson as the Operations Officer in early 2015 and will be rotating off the ship in January 2017 to become the Chief of Operations for NOAA’s Pacific Marine Center in Newport, Oregon.

Starting in 2017 I will be the Chief of Operations at the NOAA Pacific Marine Center in Newport, Oregon. My duties will vary but will mostly comprise operational support for NOAA’s Pacific Fleet.

Work hard, it will pay off later! Spend as much time learning on the waterfront and getting a practical knowledge of the maritime industry. MMA has the best working waterfront and vessels of all the Merchant Marine Academies, utilize this opportunity for your future. Take the opportunity to train outside your major, like getting EMT or SCUBA training. You never know when those skills will be that extra factor to get you hired, not to mention make you a better employee. Don’t be afraid to apply for any job, MMA has prepared you well to succeed at almost anything!

“MMA where the adventure begins!” That was the slogan on my orientation shirt in 1998 when I arrived at the school. It has proven to be absolutely true. My adventures began that year and MMA prepared me for the challenges that I now face in the industry and prepared me well. They are not 100% responsible as I had to be driven to work hard and take advantage of the training and education I received. Being at MMA is only part of the road to success and adventures the rest comes from the student. The working waterfront and hands on learning at MMA provided the stage for my learning and success and I would say is the #1 way MMA prepared me for the future. You cant be a good captain/leader without first being the best deckhand/follower.

I currently plan on a full and successful career with NOAA Corps and hope to be the Commanding Officer of one of the NOAA research vessels. After which I hope to continue working for NOAA in a civilian capacity or perhaps become a educator at a Maritime Academy.