A longstanding maritime tradition, now codified by the International Maritime Organization in 1974 as part of the Safety Of Life At Sea (as amended), Regulation 33/1 – is the expectation and duty of a ship to render assistance to those in distress at sea without regard to their nationality, status, or the circumstances in which they are discovered.

The Alumni Association created the Humanitarian Award in 2018 to recognize MMA alumni who epitomize the long standing maritime tradition of coming to the aid of those in distress. This award recognizes the outstanding efforts of our alumni who have distinguished themselves by meritorious participation in an act, operation, or for prolonged service of a humanitarian nature directed toward an individual or groups of individuals, and will serve as an inspiration to others who may someday find themselves in a situation where their involvement may prove beneficial or critical to the lives of others.

In the spring of 1975, Saigon was falling. Among the dozens of ships that would be fated to play a large role in the rescue of tens of thousands of refugees was a small destroyer escort, USS Kirk (DD 1087), captained by Paul Jacobs ’58 with a crew of 250 sailors. Dozens of UH-1s flew past Kirk, which had only a small flight deck, heading for the larger aircraft carriers. Captain Jacobs knew that many of the aircraft were dangerously low on fuel, so he ordered his men to make radio contact and invite them to land. Over a day and a half, the Kirk’s crew rescued more than 200 refugees from 16 helicopters.
As Task Force 76 ships headed east with their loads of refugees, Kirk received a surprising radio message to turn around and head back to rescue the Vietnamese navy. On May 1, Kirk reached Con Son to find 32 South Vietnamese navy vessels and dozens of cargo ships and fishing boats waiting, and overflowing with refugees, estimated to number 30,000, desperate to leave Vietnam. The ships were rusty, unseaworthy, some were taking on water. There were thousands of needy refugees, many of them babies and children. Dozens of pregnant women were gathered from the flotilla and transferred to one ship to make care easier. Incredibly, over seven days, only three of the 30,000 refugees perished.
Kirk led the flotilla toward the Philippines. Other US Navy ships joined the escort to deliver food and help attend the sick. On May 8, 1975, reaching the Philippines after seven days and about 1,000 miles, the 32 South Vietnam navy ships, led by the USS Kirk, sailed into Subic Bay flying American flags. After more than 35 years, the US Navy Medical Department produced “The Lucky Few”, a riveting documentary about one of the largest humanitarian efforts ever undertaken. (2018) 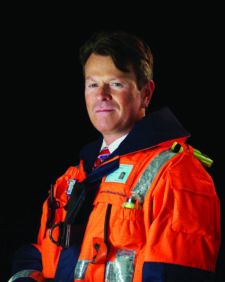 In three years, Syria civil war has seen one of the worst chemical weapons attacks in history and more than half its population of 17.9 million people displaced.
Capt. Michael Tolley ’93, a master mariner with the Merchant Marine since 2000, was delivering food aid to some of the most troubled regions of the world. The M/V Liberty Grace, a 623-foot bulk carrier capable of holding up to 50,000 metric tons of wheat, corn, rice, or other grains, which it delivered to countries throughout Africa and Asia, was headed for Galveston, TX from the Suez Canal when it was notified by the Italian coast guard of a fishing trawler adrift 120 nautical miles southeast of Sicily. That fishing trawler contained 168 men, 28 women and 40 children, some infants, who had been stranded at sea for over a week.
On Nov. 17, 2011, the M/V Liberty Grace was by their side. Once the refugees were on board, Tolley’s 20-member crew scrambled to provide food, water, clothing, blankets and medical attention to the Syrian refugees. One of Tolley’s guests previously lived in Florida and became his interpreter in organizing the refugees aboard the ship. Another Syrian refugee was a surgeon and helped Tolley tend to those suffering from high fevers. Water hoses were run on deck to fill and refill the water bottles that had been distributed. Soap and shampoo were handed out. Women and children were given the empty rooms. And 50 pounds of spaghetti, 80 pounds of ground beef, 45 pounds of chicken and gallons of soup were prepared for dinner.
On Nov. 18, after a breakfast of 720 eggs, 80 loaves of bread, oatmeal, cereal and milk, the Liberty Grace arrived in Sicily. The Italian coast guard helped ferry Tolley’s guests to shore, where they were greeted by the United Nations High Commission for Refugees, the Red Cross, and medical volunteers. (2019) 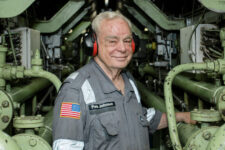 For 17 years, Pete Johnson ’64 has been volunteering as relief Chief Engineer with Mercy Ships. Mercy Ships is an international charity that operates the largest non-governmental hospital ships in the world, providing humanitarian aid like free health care, community development projects, community health education, mental health programs, agriculture projects, and palliative care for terminally ill patients. Johnson also sailed with other volunteer organizations: the M/V YWAM Liberty in Papua New Guinea and, more recently with Operation Mobilization doing disaster relief work. He spent some time as First Engineer on the M/V Logos Hope, Great Abaco Island, with about 200 volunteers assisting with cleanup from Hurricane Dorian in 2019. Also, at 80 years young, Johnson has sailed as watch engineer on the TS State of Maine, most recently on the 2022 cruise, and is highly respected by students and crew. (2022) 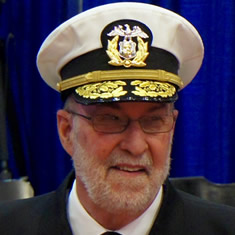 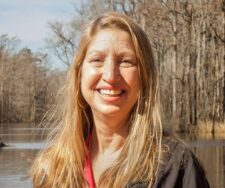 After a 25-year career that led her to becoming an Unlimited Master and sailing the world, aboard everything from tankers to cargo vessels, Captain Jones-Higgins ’87 contacted the World Food Programme (WFP) in 2012. “My dream job after retirement was to get a step closer to those needing humanitarian assistance and become involved after food aid was available for distribution at the dock, which working for WFP allows me to do.” She became more familiar with WFP operations while being under charter and involved with the aid delivery but wanted to get a step closer to the beneficiaries. Prior, on the ship, she always left the cargo at the dock. In September 2012, she went to her first port captain’s job at Port Sudan. Since then, her travels and efforts have spanned the globe, delivering and distributing life saving food and essential products to areas devastated by famine, conflict or natural disaster. In 2020, WFP won the Nobel Peace Prize for its efforts to combat hunger and foster peace in conflicted areas. WFP was cited “for its efforts to combat hunger, for its contribution to bettering conditions for peace in conflict-affected areas, and for acting as a driving force in efforts to prevent the use of hunger as a weapon of war and conflict.” Jones-Higgins said, “I was elated, what an incredible honor. It was a great boost for public awareness of the program.” (2022) 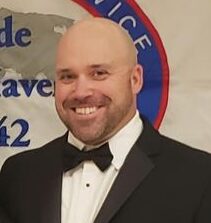 The American Pride was eastbound, 50 miles from to Tampa, FL, at 5:48 p.m. on September 18, 2019, when Chief Mate Brian Enos ’04 spotted a foundering boat. The ship turned and traveled to the boat, which was sinking with the bow down and stern out of the water, the name CAPT BOB visible on the stern. The ship notified U.S. Coast Guard and as the American Pride approached the boat a second time, Chief Mate Enos spotted orange smoke and a parachute flare approximately 3 miles southwest of the CAPT BOB. The man-overboard signal was sounded. At 6:42 p.m., the rescue boat was deployed and approached a life raft. They found two men and one woman onboard. The three survivors were brought aboard the American Pride‘s rescue boat and the life raft was towed back to the ship. At 7 p.m., the survivors boarded the American Pride via the starboard accommodation ladder and were provided with food, water, showers, clothing and blankets. Once on scene and alongside the ship, the Coast Guard disembarked the three people from the American Pride and transported them to St. Petersburg, where they were released in good condition. At the United Seaman’s Service 52nd annual Admiral of the Ocean Sea Award, the crew of the American Pride and Chief Mate Brian Enos were recognized. (2022)