NORFOLK, VA – The Training Ship State of Maine (TSSOM) arrived in Norfolk, Virginia, last week under blue skies and fair weather. The vessel sailed past the Norfolk Naval Station and into Lambert’s Point, navigating through one of the busiest ports on the Eastern Seaboard.

TSSOM was met pier-side by Mr. Phillip Miller, MARAD’s new Division of Atlantic Operations Ship Operations and Maintenance Officer. During the inbound transit, the ship passed an array of Navy, MARAD, and commercial ships moored in the Elizabeth River. Pilotage and docking, both arriving and departing, were performed by Maine Maritime Academy alumni providing cadets with a glimpse of future career opportunities. In addition to enjoying cellular service overnight, many personal letters and packages were received bringing large smiles to the students who had anxiously awaited their delivery. 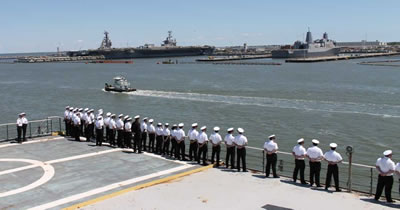 Prior to its arrival in Virginia, TSSOM sailed from Maine to Boston, Massachusetts staying near the coast to avoid offshore gales. A day-long stop in Boston allowed for excellent navigational training and an opportunity to take on fresh stores. From there, the ship sailed south on a Caribbean transit that brought them through the Bahamas, west through the Old Bahama Channel, then North along the eastern seaboard. At each step of the voyage, students have engaged in key hands-on training opportunities, putting their hard-earned skills to the test on open water. Engineers tweaked equipment to adjust for ocean temperatures that ranged from the low forties in Maine to the mid-eighties in the Caribbean and back again. While not on watch, in training, or preparing for Coast Guard exams, students enjoyed the Caribbean sunshine and marine life around the ship.

“Participation in our summer training cruise marks the culmination of years of hard work and these young men and women are proving themselves as capable and dedicated mariners,” says John Cashman, Commandant of Midshipmen. “On this trip, they have had the opportunity to practice their skills, hone their instincts, and begin to really understand what it means to have a career at sea.”

On Saturday, May 1, TSSOM passed near the final resting place of El Faro off Crooked Island in the Bahamas. Students, faculty, and crew gathered on the 03-reception deck to honor the lost crew including five MMA alumni who perished on October 1, 2015.

As part of the ceremony, TSSOM flew signal flags with the first letter of the last name of each of the MMA fallen. A moment of silence was followed by a powerful musical performance of “Crossing the Bar” by Alfred Lord Tennyson and the presentation of a life ring that was designed by two students to honor those who were lost. The memorial life ring will now proudly hang in the forward mess.

For the remainder of the 37-day cruise, the vessel will sail along the mid-Atlantic coast before returning to Penobscot Bay. Following the stop in Norfolk, the ship will spend six days offshore, moving in and around approaches to various ports then sail into New York Harbor. Against the backdrop of the New York City skyline, students will observe Ellis and Governor’s Islands and the Statute of Liberty as TSSOM makes its way through the Narrows and up the East River to pier 36 in lower Manhattan. For the engineering students, the transition to coastal and inland waters and changes to the plant status provides opportunities to integrate regulatory requirements, machinery changes, and vigilant watchstanding.  For the deck students, observing the Master & Harbor pilot interaction, managing terrestrial navigation with multiple vessel contacts, and experiencing mooring operations with tugboats coalesces the knowledge derived from the classroom.

“New York Harbor, one of the busiest in the world, is an excellent opportunity for the students to experience true teamwork, manage a complex watch at the highest levels, and build the confidence that will buoy their careers,” says Captain Gordon ‘Mac’ MacArthur, TSSOM’s Master.

Cashman noted that the teamwork among the onboard departments is outstanding. “The integration of faculty training officers with the ship’s crew, including our temporary watch officers reinforces to the students that each day at Maine Maritime Academy provides them opportunities to learn and build skills that are vital to their career. The Chief Steward and galley crew keep spirits high with excellent meals and morale events. Eating meals together and enjoying these events facilitates the camaraderie that makes a career at sea unlike any other.”

Following the two-day stop in New York, TSSOM will again venture offshore then enter Massachusetts Bay to anchor outside of Provincetown. After Provincetown, TSSOM will make its way up the coast of Maine and into Penobscot Bay on May 20 then moor in Castine on May 21. The 260 students and crew will remain aboard the vessel until training officially ends on May 23, at which time seniors will take the five-day U.S. Coast Guard license exams on the MMA campus. Friends, family, and fans are invited to follow the ship’s journey through the cruise blog at cruise.mainemaritime.edu.