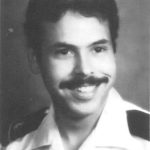 I reported for indoc in the summer of 1982 as a “MUG” starting my career as a member of the class of 1986. The first thing I was presented with was our little black book or Maine Brace and was instructed to put it in my left rear pocket and keep it with me at all times. I didn’t really think much about it at the time; little did I know that simple instruction would guide me from then on.

Indoc was yet to start and as I was sitting in my dorm room (the T.V. State of Maine was on loan to Mass. Maritime that summer so we did not live on the ship) waiting for what was next. I started to flip through the book to see what it was about. Next thing I know yelling and screaming started out in the hall and the “strikers” were yelling for us to all fall out and line up against the bulk head. I jumped out of my chair and flipped the Maine Brace over my shoulder to fall out. The moment I fall out my first thought is, “oh no, I was supposed to keep the Maine Brace with me at all times, I hope no one notices.”

Out we marched to the field to start the first of many long drills, learning how to march. Still I was safe; no mention of the book. Soon enough that ended as once the marching drills stopped we were ordered to “take out Maine Brace”. As everyone in my company did, I was standing there with nothing. One of the strikers approached me and asked “where is your Maine Brace” at which point I proceeded to tell him what had happened. He walked away and returned a few moments later with a rock of about three pounds. Well as everyone held out their Brace at arm’s length and memorized the “Mission,” I held my rock.

After a period of time (it felt like forever holding that rock), we were ordered to “stow Maine Brace.” Everyone in my company complied, but again I stood out not knowing what to do. I was ordered to stow the same as everyone else and had to stow my rock in my left rear pocket. This continued on and off for the rest of that first day of indoc. At the end of the day the striker retrieved the rock from me and left it on a stump by the football field. There it remained for the remainder of our indoc. 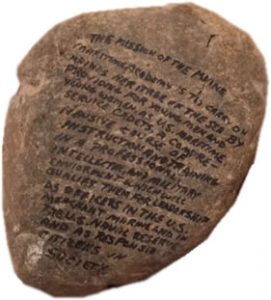 The first opportunity I had I retrieved that rock and 30 years after graduation I still have it. It actually traveled with me on my first trip as a third mate working for DelMonte and to this day still sits on my desk at home. I made it a point to get it back and to keep it all these years as a constant reminder of some of the hardest and best years of my life. It is a reminder that all lessons have a purpose, even if it doesn’t seem so at the time. It also reminds me to first and foremost always be prepared for what may come up, whether it be storms at sea, fires aboard ship, or the everyday struggles of life.

MMA taught me to expect the unexpected, embrace the challenges, and learn from my setbacks. Not a day goes by that when a new challenge arises I don’t fall back on something I learned at MMA, and when a situation arises that I think may be too difficult or not worth dealing with I can look at that rock and know I can accomplish anything.