Bowdoin’s new planks are being cut and frame replacements continued throughout the week.

Once an old frame is removed, a pattern is made out of thin plywood using the adjacent frame as a template. The pattern maker has to mark the bevel (angle) at multiple locations on the outside and inside of the frame so that the new cut fits the curvature of the hull snuggly. Once the pattern is made, the shipwrights must find a suitable piece of frame stock; for this project, we are using seven-inch thick live oak slabs. Once they have made their selection, they set up a chainsaw cutting jig to cut the “rolling” bevel – the angle changes throughout the length of the frame. Even though the yard has several large tilting blade band saws, a chainsaw is the preferred tool for making preliminary frame cuts. The live oak tends to “gum up” the saw blades on the band saw and careful coordination between several people is required to cut an accurate rolling bevel. Once the general shape is cut, the frame is taken to the ship for the final detail cuts and installation.

To watch lead shipwright Ross Branch cutting out a frame with the chainsaw jig, please click here. The video also contains a walk around of Bowdoin so you can see the progress that has been made on the schooner so far. 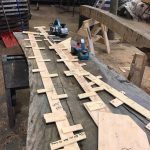 Patterns ready to be made into frames 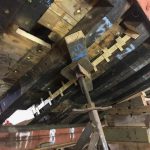 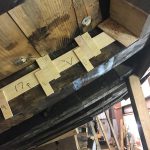 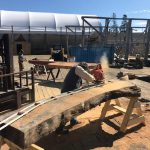 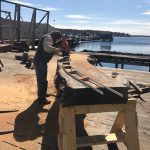 Cutting a frame out