We have had another productive week at the shipyard. Last week I said that we had 14 more futtock sections to install, and I’m happy to report that by the end of this week we will only have 4 more left. Most this week’s work has been focused on frame installation, but we also have two shipwrights working on getting planking ready to go on the vessel as well. The focus of the planking work is on cutting new planks and faring the new frames to the shape of the hull. All this hard work paid off and we hung the first plank this week! That said, we still have plenty of work to do to get Bowdoin sailing this summer and continue to work hard towards that goal.

I have also been in contact with historians from Cummins this week. The diesel engine company is celebrating its 100-year anniversary this year and are using Bowdoin to help represent the progression of their engines over the years. Bowdoin has used a Cummins engine for nearly 100 years, starting in 1928 when the vessel was fitted with a Cummins Model F. In the 1940s, that engine was switched out for a Cummins Model H.

During Bowdoin’s rebuild in the 1980s, the folks that were working on the restoration of the vessel were looking to rebuild the Model H and sent Cummins the engine’s serial number to try and source some parts. Cummins wrote back saying that they would like to have the Model H engine for their historical archives, as it was most likely the oldest one still in operation. In exchange, Cummins gave the vessel a Cummins N-855-M engine for use on the schooner. That engine is still in operation on the vessel today!

To add to this great history, Cummins donated all necessary parts and a technician to overhaul the engine during the rebuild in 2016. That project was completed in MMA’s shop, with a great majority of the work done by MMA students.

With nearly 100 years of successful operations powered by Cummins, Bowdoin certainly can testify to the reliability of these engines.

I am continually impressed with the history of Bowdoin and the connections that are made through the vessel on a daily basis. I look forward to many more years of history and connections made while Bowdoin serves as Maine Maritime Academy’s iconic training vessel. 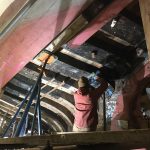 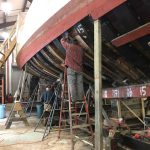 Final frame patterns being made 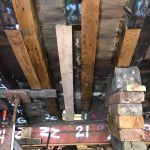 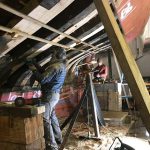