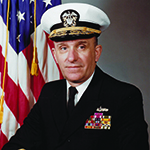 Since graduation my career has taken me all over the world including Korea and Portugal where I lived for some time. I served as a Rear Admiral of the U.S. Navy, but now I am retired and maintaining a very high profile in the community and state. While on active duty I had four sea commands and four shore commands. As a flag officer, I worked as an operational commander of the Korean Navy and Marine Corps, senior member of the Military Armistice Commission, and Commander of the Atlantic Fleet Amphibious Force (32 ships). I also served as Deputy Commander and Vice Commander of Military Sea Lift Command (163 ships and 10,000 people), with a NATO tour.

I am retired from the U.S. Navy after serving 41 years and becoming a Rear Admiral. I’m a leader in various community and veteran projects.

Always practice loyalty up and down; never accept anything but the best; lead by example in both civilian and military life; and remember that you can do anything that you set your sights on.

MMA provided the standards and examples of leadership and accountability that assured my success.

I will continue to set a good example for others to follow and try to make the world better for having been a part of it.