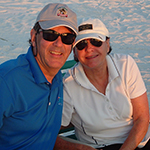 After graduating in 1971, it took all of one week to get a job as 3rd Engineer on the Great Lakes with Interlake Steamship. There was an impending Steel Strike in August that year, so I went home for a week. Returned a week later to Cleveland Cliffs Steamship where I worked two more years, advancing to 2nd Engineer. Then, I had one more at sea going to Vietnam, Thailand, and finishing on Getty Tanker coastwise U.S.A. I did short stints at Maine Yankee and General Dynamics and then began as a startup engineer with Riley Stoker (now Babcock Power) where I was allowed travel to many power plants in the U.S., and was exposed to many new technologies.

I took a sales position in San Francisco with Combustion Engineering (Later called ABB, then Alstom, now GE), and in summer 1981, returned to Maine in sales. I worked for Anchor Packing-Boston and then Industrial Packing in Bucksport servicing Industrial accounts in Maine, New Hampshire, Vermont, and Massachusetts. I retired from Industrial Packing in 2014 after 25 years.

I am now the Chief Bottle Washer and Golfer, working for myself at Longley Associates. Having developed many contacts and gaining invaluable product experience with Heat Exchangers, Expansion Joints, and large Mechanical Seals for Hydro plants, I have transitioned my talents to my second career. I travel all over the U.S. and Eastern Canada as a consultant on large projects like Hydro Generator Cooling Coils, Thrust Bearing Oil Coolers, and Split Seals for large Hydro Plants.

Seek out our great alumni wherever you are located. Also, all the other Maritime Academies have great alumni too, so find them and thrive. Being honest, eager to learn and hard working in everything that you do will lead to a happy and productive career. Be happy and willing to go the extra mile. Remember that change is always going to happen, so stay one step ahead of the curve by becoming an “expert” in whatever you do. Then, when the crap hits the fan, you will be prepared for whatever comes next. Frustration and hard times will occur; always remember that the sun will come up tomorrow.

And, I would always recommend a sales career as it is a most rewarding field. The people I have met, and places that I have seen are second-to-none. If you love travel, not being confined to an office, problem solving, and adventure, go for it. Extend yourself; the rewards are great!

Without my education at MMA, I would not have had anywhere near the opportunities and the open doors that my 4 years in Castine afforded me. My education made me focused in an almost quiet way — one which I had not fully comprehended until writing this.

My goals now center around my second career and my family. Traveling and seeing new cultures makes the world very small. We all have much in common with everybody in the world. Staying healthy, exercising and playing sports, eating properly, and making meaningful connections with others is so important in achieving a well-balanced life. Find something to get excited about!