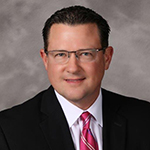 Prior to joining Hendry Marine Industries, Mr. Smith was the Chief Commercial Officer & Head of Government Affairs for Overseas Shipholding Group, responsible for Business Development, Chartering and Commercial Operations of the 24-vessel fleet. He represented all of OSG’s maritime and political interests in Washington, DC. He was instrumental in the expansion of the OSG domestic fleet with the execution of the 12-ship new construction project at Philly Shipyard in 2005 and the acquisition of Maritrans Inc. in 2006.

His career in shipping began in Washington D.C. as a project engineer for the Department of Defense. Mr. Smith supervised the new construction and delivery of nine oil tankers. Prior to joining OSG, He was a tanker broker for 12 years specializing in the Jones Act Trade and formed of a joint venture partnership with Exmar Offshore to design and build U.S. Flag Tankers.

Mr. Smith is the Vice President & Chief Commercial Officer for Hendry Marine Industries, Inc. He is responsible for all the commercial activity which includes business development, sales and marketing, and government affairs for HMI and its subsidiaries. As part of the CEO executive team, he establishes the growth objectives and executes on the strategic plan.

I was once told that to be successful, you only have to work half days. You can work either the first 12 hours or the second 12 hours of each day. While this was meant to be funny, it’s actually great advice. Commit to your work in the first 5 years of your career and you will never be without a job… for life!

Read every article, newspaper, book, and magazine associated with the maritime industry.

People don’t care how much you know, until they know how much you care. Life, and work is about relationships. Grow and cultivate a lifetime’s worth by starting with MMA. Make friends and keep them by staying in constant contact. Business and job opportunities will flock to your door as a result.

Give back! As soon as you graduate, make a point to give back to the school and to the students in some meaningful way. If you have money, give money. If you have time, donate your time. If you are extremely fortunate, do both!

MMA taught me to:

Do all with a deep sense of purpose

In everything I have ever done, or been involved with, I have had great success due to the above.

For 30 years I have been involved in the U.S. Maritime industry. Specifically, with oil tankers. I have built them, bought them, sold them, operated them, and repaired them. I have made a life’s work of being part of the Jones Act industry.

I must say my greatest joy has come from helping people become successful. As such, owning my own company and serving others while tied to the maritime industry I love so much would be the ultimate opportunity.

The ultimate compliment would be to have others say that because of my help they became better people and more successful in their careers.

I always want to serve others!