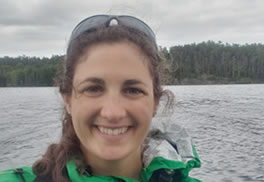 I grew up in Carmel, Indiana and graduated from Indiana University with degrees in both Biology and German in 2013. I taught English abroad in Austrian high schools from 2014 – 2016, which led me to pursue a Master’s degree in German and Second Language Acquisition from the University of Wisconsin in 2018. In grad school, I realized I wanted to live closer to the ocean, which is how I wound up at Maine Maritime Academy teaching German and working for the admissions department! I love working in higher education and helping students navigate their paths to their future careers. Outside of work, I am an avid hiker, kayaker, and Ultimate Frisbee player!

Though we’re small, there always seems to be something going on around Campus! One example I can think of is how hard the whole campus community works to help students relieve stress during finals week! The Nutting Memorial Library even invites both furry and reptilian friends to keep students motivated to study!

Growing up in Indiana, there’s not a lot to do other than go underground. In high school and college, I was quite the spelunker as I explored over 20 limestone caves in Southern Indiana. My favorite memory was helping the local caver’s club sandblast the graffiti off of the cave walls.

I have a black cat named Olive, who loves to sit on my arms while I’m working from home (and she’s doing it right now!).