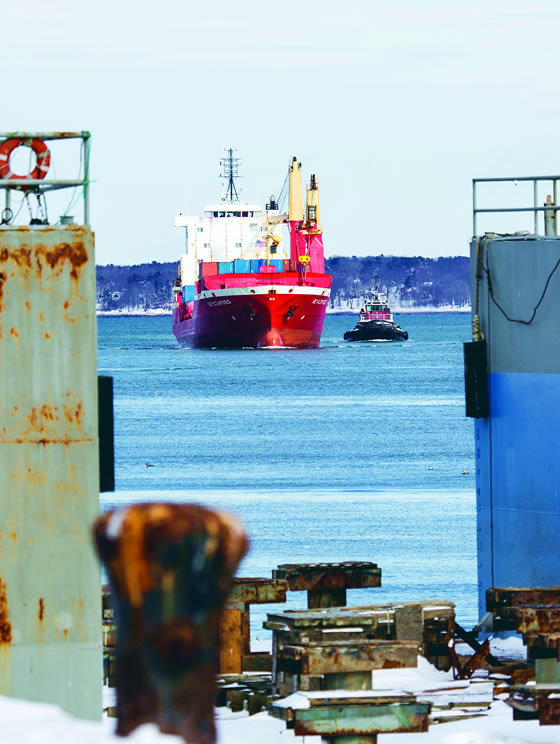 Just about any direction you steer in Portland seaport you’re likely to meet MMA alumni. We talked to a sampling of academy-trained professionals and learned that the port has taken on new energy and growth with shipping and investment on a steady uptick. 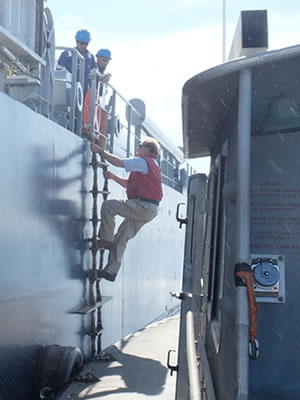 In recent weeks, a second mobile harbor crane was installed to handle growing freight volume at the International Marine Terminal, part of more than $15.7 million directed toward doubling cargo capacity and a promising trade connection to Canada, Scandinavia and Northern Europe. Other projects include construction of a new operations building, enlarging the pier and improving rail service to the port.

“The potential for growth here in Maine is significant,” says Matthew Burns ’04, acting executive director of the Maine Port Authority. “We have already experienced major success in the recent developments and hope to see that business continues to grow.”

Burns has a full docket of responsibilities, from purchasing port equipment and managing marine infrastructure projects to developing maritime-related policies and meeting with private sector businesses to assist them with improving their freight transportation needs.

“I love that I still have a strong connection to the maritime industry in my line of work,” he says (having worked as a deck officer at sea for 13 years), “but I am home with my family every night.”

The volume of containers moving through the terminal has more than doubled since 2013, as well as the value of goods, which was $502.7 million last year.

A major player in this growth is the Icelandic shipping firm Eimskip, which made Portland its U.S. headquarters in 2013. The company imported more than $283 million in products—primarily frozen fish—into Maine in 2016, according to the Portland Press Herald. It also exported $118 million worth of products, including $2.8 million worth of lobsters.

Menezes works in documentation and customer service in the Logistics Services area, helping customers from start to finish in the export process from Maine to Europe. She monitors the logistics behind scheduling pickups, clearing customs and working with overseas offices to make sure everything is in order for a smooth entry.

LaChance is a terminal manager for SDG Marine, a contractor for Eimskip that handles stevedore services at the port. 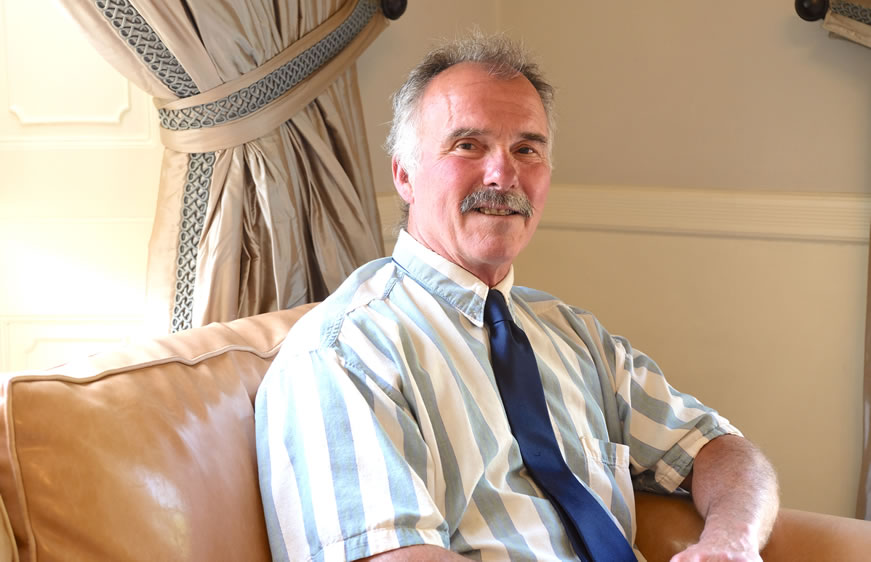 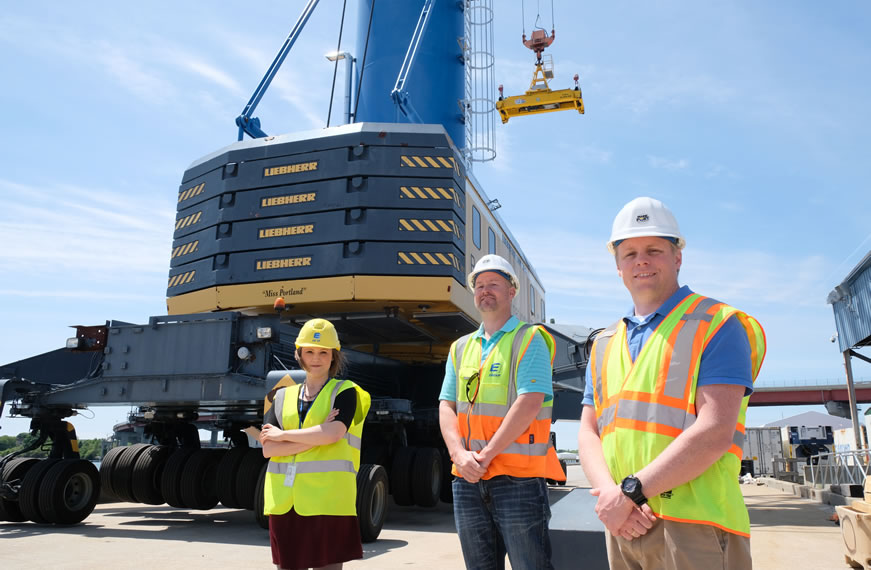 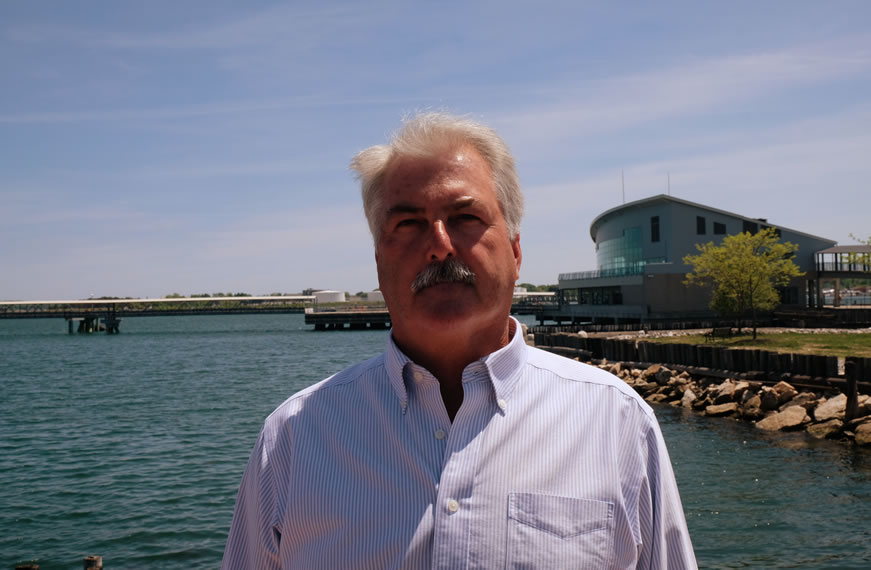 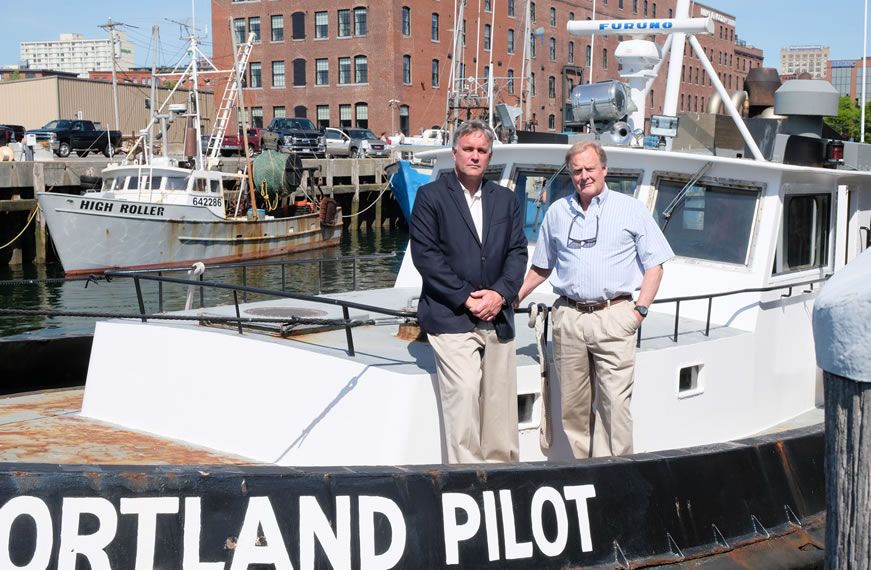 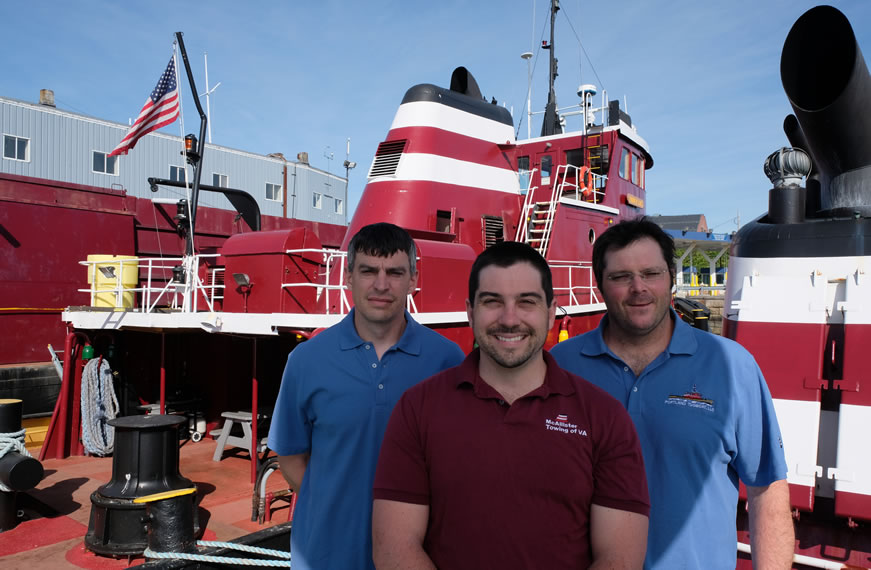 “My primary responsibilities are managing the local union (ILA) personnel,” he says, “coordinating day-to-day operations, including loading and unloading Eimskip vessels, and ensuring our transportation partners are efficiently able to deliver containers to and from the port.

“Because of the recent improvements at the port (a second crane, new container stacker and more),” he adds, “the future looks bright for international shipping to and from Portland.”

Shawn Moody ’82, agency manager with nearby Chase Leavitt Shipping Agents, started with the company in 1995 after going to sea for 13 years and obtaining an Unlimited Master’s License. His responsibilities include serving as direct liaison with vessel owners, operators and charterers. He coordinates pilot and tug services for them, and serves as liaison between clients and government officials. Moody also serves as a marine surveyor. The company specializes in bulk, breakbulk and cruise ships.

“We’ve seen forest products import/export definitely declining with the paper mill industry in Maine closing many of its mills,” says Moody, “but as long as we are driving cars and have cold winters, gasoline, heating oil and road salt will continue to be cargoes that will be imported via Maine ports.”

The volume of containers moving through the terminal has more than doubled since 2013, as well as value of goods.

He has observed that cruise ship traffic is on the rise as cruise lines look for new ports, and Portland and Rockland have benefited from the oversaturation of Bar Harbor.

Portland is the second largest port of call in Maine for cruise ships, after Bar Harbor and adjacent Acadia National Park. Cruise ships dock at the Ocean Gateway International Marine Passenger Terminal, the largest cruise ship terminal in the state.

The terminal has three berths for cruise ships, which is a bonus for the cruise lines, as they don’t have the liability of ferrying their passengers from the ship that they have in anchorage ports such as Bar Harbor. Its central proximity between the embark/debark ports of New York and Boston and the Canadian Maritimes makes it an ideal stopping point for passengers.

Also, Scot Clontz ’03 is a boarding agent for Chase Leavitt. Nearby, another alumnus, Jim Goss ’02 works for Moran Shipping Agents.

PILOTS AT THE POINT

If you are bringing a ship from the south or one with more than a 35-foot draft into Portland, the first person you are likely to meet is either Harbor Pilot Capt. Mark Klopp ’87 or Capt. David Germond ’81, at the “P” Buoy located 12 miles offshore from their berth on Union Wharf.

“Once we board the vessel, the master of the ship and pilot have a formal information exchange regarding the condition of the vessel, her maneuvering characteristics and passage plan into the harbor,” says Klopp. “When this is complete the captain will pass the ‘conn’ (control) of the vessel to me and we proceed inbound. At this time, I am conducting the speed, course, collision avoidance and all communication with other ship traffic and tug escorts as required.”

A typical day for the pilots might be as it was July 18, when Moran Shipping Agency called to report the ship Iver Prosperity would be arriving from Saint John, Canada, on July 21 at 2215. The plan was for the pilot to board at the eastern approach pilot boarding station, going to Buckeye terminal in South Portland.

“We also will have a container vessel in port, and the ferry from Yarmouth arriving and departing,” says Klopp. “The time of arrival and departure of all vessels will inevitably change; we need to adjust constantly. In other words, we must be very flexible, around the clock, 24/7. Throw in weather conditions such as fog, high wind and large seas that prevent us from boarding or disembarking, and the traffic movement puzzle gets more complex.”

With all the challenges of the job, however, Klopp says, “The work is fascinating and rewarding. Departing the harbor to board a vessel offshore is different every day and night. I witness Mother Nature first-hand, up close, every day. There is never a dull moment.” 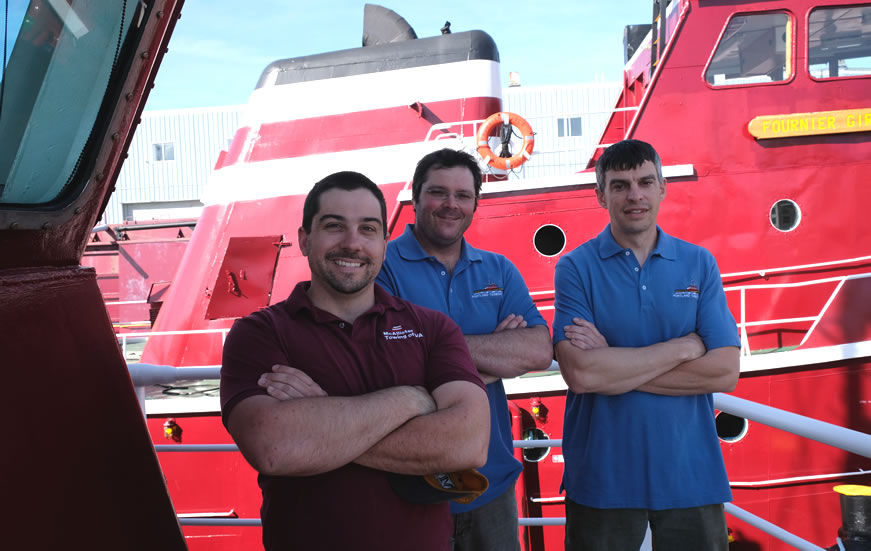 At the Portland Head Light, Portland Tugboat Company vessels take over from the pilots to escort and berth and assist ships. Capt. John Reeves ’09 operates the Andrew McAllister, a ship assist and escort tug.

“We help out our Providence division (of McAllister Towing), regularly escorting tugs and barges through the Cape Cod Canal,” says Reeves. “We also have been escorting Bath Iron Works’ Navy ships in and out of the Kennebec River.”

The perks of the job go back to MMA: “I feel very fortunate to be able to apply my education and skill set close to home, and work with some of the best people I’ve ever met,” he says. “I also really enjoy that we get involved with community charitable and celebratory events.”

Attorney Mike Savasuk ’74 with Troubh Heisler, PA has watched the activity of the port from a downtown corner office with an expansive view since 2012, after 30 years of private practice. He specializes in maritime and admiralty law, and has defended million-dollar claims; he has also obtained multi-million-dollar verdicts.

Savasuk represented the captain and crew in a case involving the largest salvage award in the United States.   After graduating from MMA, he was a deck officer sailing on oil tankers before attending law school and then working for a large admiralty firm in New York City.

“Most of the cases I handle, especially maritime cases,” says Savasuk, “present a unique set of facts and legal issues that require extensive research and analysis.

“The outcomes can often set a precedent. In other words, I’m making a difference, which keeps the work interesting.” 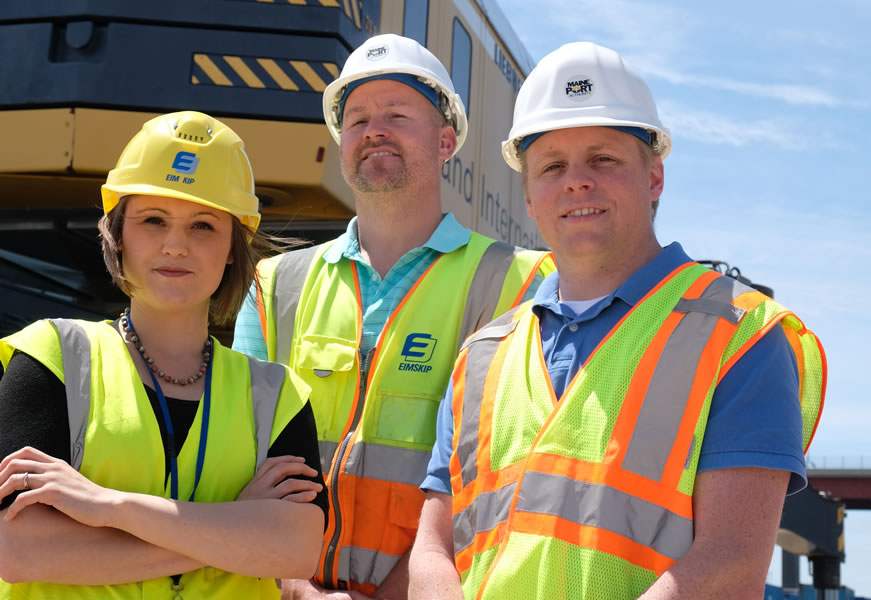 Savasuk notes his connection to MMA continues in several ways: “I have represented other alumni in the area. One of my favorite things to do is help young MMA students and graduates, whether it’s regarding problems with the USCG or winning a recent case where a young cadet got Legionnaires’ disease.

“This case set a precedent when a federal judge in New Orleans found the vessel unseaworthy as it pertains to the workplace for seamen.”

Savasuk has also served on the MMA Alumni Association Board, which he observes, having worked with other maritime schools, “is a group of highly organized, focused individuals who are deeply committed to maintaining a strong U.S. maritime industry.”

Another alumnus and longtime resident of the Portland area, Charlie Baird ’85, is Deputy Harbor Master, and his job involves escorting ships in and out of port, enforcing no-wake zones and helping coordinate community events in the harbor. 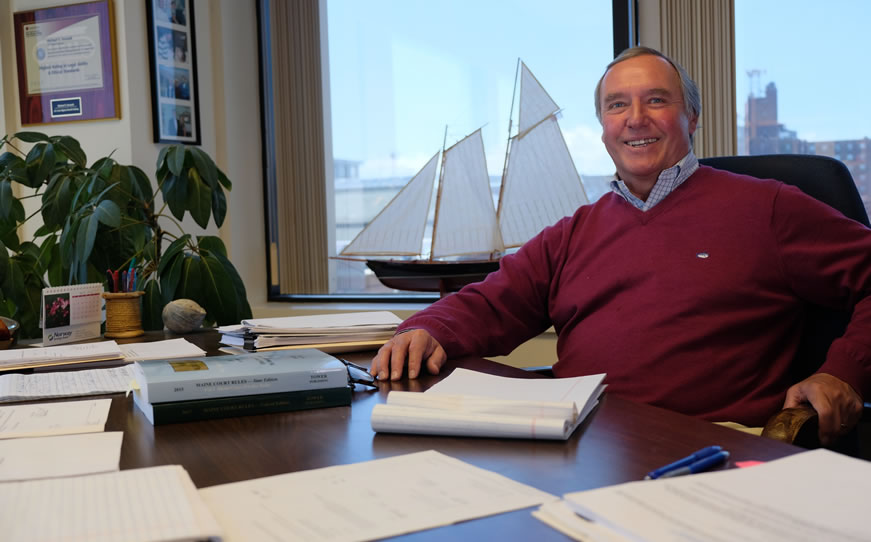 “Portland is thriving with eight marinas, a yacht club and many mooring fields,” he says. “In recent years, not only has Eimskip shipping made a large investment in the port but also Portland Yacht Services.”

The work is fascinating and rewarding. Departing the harbor to board a vessel offshore is different every day and night. I witness Mother Nature first-hand, up close, every day. There is never a dull moment.

Baird’s maritime experience includes 14 years on container ships and 17 years on tankers, ultimately as a chief mate. “As far as Portland goes,” says Baird, “it is a growing, vibrant town, close to Boston, beautiful mountains and ocean, with a lot of work opportunities and alumni contacts.”█

There are More MMA graduates at work in the Portland area than we could discover and contact for this article. We would be happy to update fellow alumni with news of others in Portland in future Class Notes updates. Send info to billy.sims@mma.edu.

There are many MMA alumni events in the Portland / Southern Maine area. Contact the following alumni chapters to learn of upcoming activities.