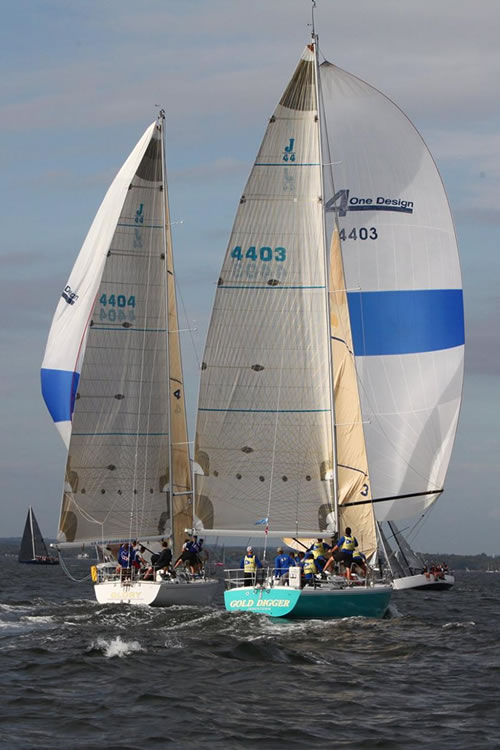 Hard to WindwardThe academy's sailing team has a proud history and promise for the future.by Phil Harman

Hard to WindwardThe academy's sailing team has a proud history and promise for the future.by Phil Harman

When asked for a recollection of MMA sailing team history during his tenure as MMA Waterfront Director over a span of 40 years, Phil Harman carefully hand-wrote much of the following about a team with humble beginnings that rose to be a national champion and international competitor.

Harman’s role in this success, which he modestly excluded, was recognized by his induction in 2004 to the Inter-Collegiate Sailing Association (ICSA) Hall of Fame for Lifetime Service. 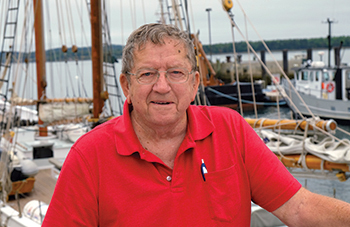 (Also in this article, you’ll learn how the team has progressed recently.)

I am 80 years old, Harman begins, and may not be entirely accurate on the dates. I came to work on the MMA Waterfront in 1962, which was 55 years ago.

MMA didn’t have an active yacht club at that time. All we had to sail were two old 26 ft. rowboats that had short wooden masts and centerboards, which could be rigged to sail. They were the definition of Lead Sled.

But soon after, a student yacht club was formed when we received the donation of a really nice sloop, Clio, and a cutter, Diana. Our first two ocean races were done in those two boats—the Nevins Cup and the Monhegan Island Race.

Admiral Rodgers became the superintendent and was a valuable resource for sailing at MMA.

Watch the latest video of the MMA sailing team in action, hard at practice, racing, and enjoying being on the water.

Capt. William Kennaday was an instructor then, and also a staunch supporter of the sailing team. He and other staff served as advisors on the early ocean regattas MMA entered, and he later developed the Kennaday Cup Race.

In addition to the Lead Sleds, we had three Gannet sailing dinghies donated. They were in poor condition, but the team fixed them up so they could practice for dinghy competitions.

MMA also received a 47 ft. yawl, Windrose, and this boat was used in the Mount Desert Island Regatta. The team won the race with Durlin Lunt as advisor.

At this time MMA was becoming noticed in sailing and donations were improving. 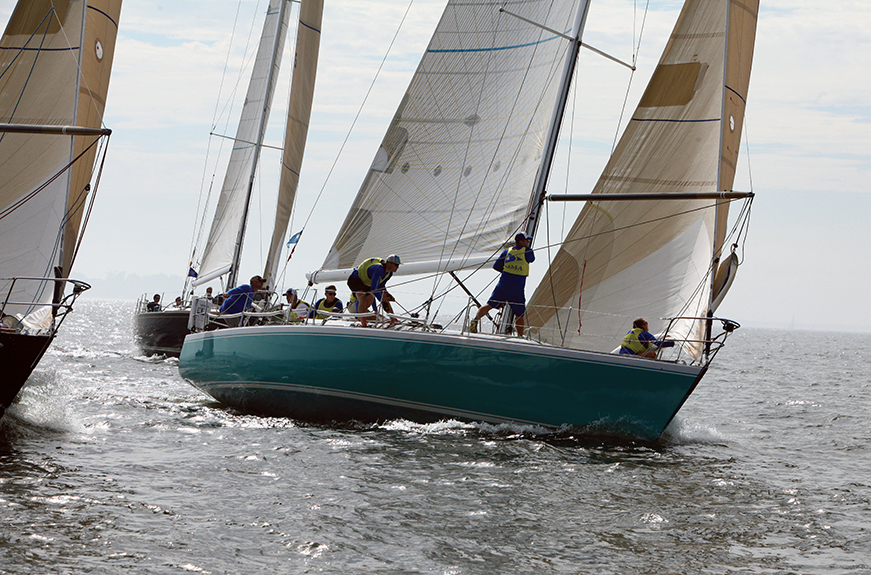 MMA sailors were getting their feet wet in ocean racing regattas and varsity sailing.

Clio and Diana were sailed in the Gulf of Maine Sailing Association Regattas (GOMRA), and MMA sailors were doing well with the old boats.

MMA sailors were becoming respected for their ability.

We acquired 10 Lark sailing dinghies that the sailors and waterfront personnel put in decent sailing condition. 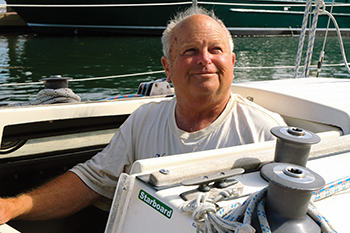 Frederick “Butch” Minson was a national collegiate sailing champion before coaching the MMA team for 14 years. [We sadly note he passed away October 30, 2017.]

The MMA sailing team became a member of the New England Interscholastic Sailing Association (NEISA), which comprises the largest district within the Intercollegiate Yacht Racing Association of North America. This put them in competition with teams from Harvard, Yale, Tufts, Bowdoin, Canada, and more—very stiff competition for a new sailing team.

By this time, however, MMA had a solid sailing program in place with Lark dinghies, Mercurys, and several Shields. The yacht club was 50 members strong.

An important community supporter was Merle Hallett of Handy Boat in Falmouth, Maine. Merle helped raise money for special regattas, provided free moorings, and was a wonderful man and a great sailor.

About 1981-82, MMA received a huge donation from Charles Payson for the Waterfront Building Fund, which enabled us to build Payson Hall, and soon after made another donation around 1986-87 to purchase two C&C 38 ft. sloops, twenty Lasers and twenty 420s. I was also able to buy a 35-ton travel lift and complete its pier. This donation really put MMA on the map. Now, we could haul our own boats much easier.

The addition of the new boats helped the entire team progress. We were able to practice in comparable boats, and pulled off some surprising finishes in regattas against the best sailors in America.

MMA yacht club members (of which there were 55) raised money to buy GPS systems.

I retired from MMA, and by then the teams were participating and winning consistently in a full schedule of NEISA regattas and beyond.

Tim Leach took charge (and in 2002 was named Manager) of the Waterfront and did a super job, continuing MMA’s winning ways.

Butch Minson, who coached the team for 14 years, and Tim began to promote and develop high school sailing as a Maine sport.

Tim recognized that 70 percent of students attending MMA were from Maine, and if we were going to be competitive in college racing we needed to support high school students in developing their skills so they would arrive with better ability and understanding of sail racing. 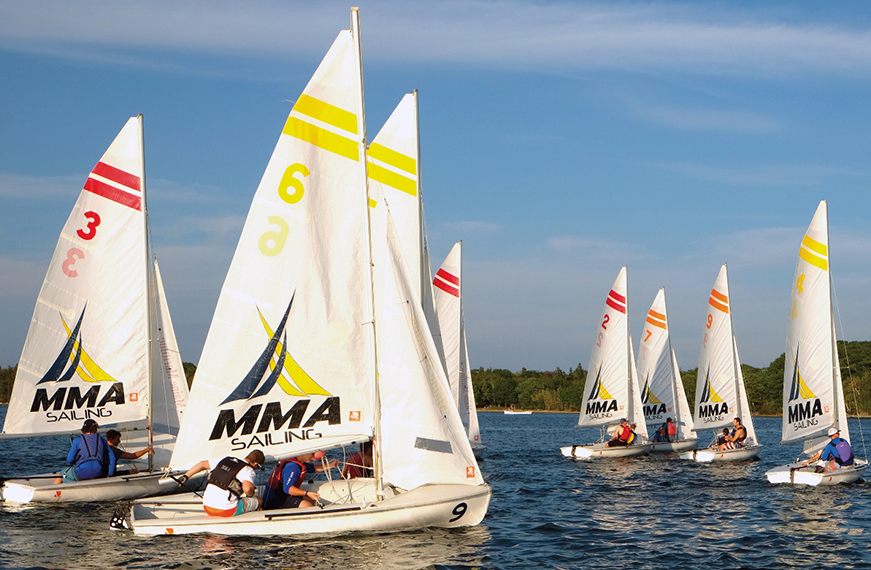 Throughout the years, the sailing team has excelled in offshore racing while it also deploys a competitive dinghy team.

One of the ways we supported this effort was to host the Downeast High School Sailing Regatta. Today, it’s the largest high school fleet regatta in New England. We also hosted several area high schools for their team practices, in particular, MDI and George Stevens Academy team racing events. Obviously, this was a good recruiting tool for MMA sailing and general enrollment.

Another step we took was to purchase Colgate 26s, with a goal of acquiring 10 total (there are nine at MMA currently). We need one more to be able to host the New England Sailing Championships. Colgates are great multi-purpose sailboats that can be used for competitive sailing and also sail training.

When Butch retired, Tom Brown, a former two-time Paralympic sailing medalist, became coach and took the team to the Los Angeles Yacht Club to compete in the Los Angeles Harbor Cup. The team won the event, which was a new regatta and West Coast sloop championship. We also went to New York and won the New England Sloop Division in J-35’s.

MMA returned to Los Angeles and defended our championship with a win, two West Coast championships back-to-back. And the team also returned to New York and repeated its win of that regatta.

MMA won its first national championship of any team in MMA history. They did so by winning the John F. Kennedy Cup at the US Naval Academy by beating a field of eight other top national qualifiers. (Six of the seven-member team were from Maine.) As a result, the team went on to represent the US in France in the International Sloop Championship and finished in the middle of the fleet.

To enable this trip, Tim raised $75,000 through community support.

As Brown said at the time, “It’s a little hard to believe, but the little school on the hill [went] to France to represent the USA in France as Team USA!”

MMA sailing has come a long way over the years. As Phil Harman noted, many of the team’s leaps of success started with generous community support. This is certainly the case with MMA Trustee Arthur “Kitt” Watson who created an endowment that will help the team in many ways, from equipment and repairs to travel and staffing.

“Along with my family, I’ve been in races that included MMA teams for much of my life. It was always fun, and I’ve seen the quality of students involved and feel it’s important to support them,” Watson says. “As a trustee, I support the college overall because the kids who graduate from MMA are so well equipped to handle the world.

“But I have a special interest in the sailing team because I believe sailing is so elemental and teaches you seamanship and self-confidence in a strong way.”

MMA senior Isaac Parker was the offshore team’s headsail trimmer this year, and says joining the team “was by far the best decision I made at MMA. It has opened so many doors and led to many awesome experiences that wouldn’t have happened otherwise.

Each season he’s been on the team, Parker notes there have been highs and lows. The recent departure of team coach Caroline McNally and general turnover in coaching staff in recent years has been a setback.

“But this year,” he notes, “it felt like the offshore team was finally a cohesive unit that could progress to success. The highpoint was October, winning over the fleet at the Storm Trysail Intercollegiate Offshore Regatta in the J44 Golddigger. It was highly competitive but our team definitely brought its A game.”

This year’s team included close to 25 members, and fielded full dinghy and offshore teams. It started with an improved ranking in NEISA from 34th to 22nd over the previous year.

Waterfront Marine Operations Manager Dana Willis acknowledges the challenges. “We’ve started a search for a new coach,” he says. “But Caroline did a great job and left the team on a good footing. We’ve also incorporated some of the best practices from previous coaches into the program.

“I believe we’re poised to move forward,” he says. “I agree with Kitt that handling a boat under sail, learning currents, winds, relative motion, understanding tides… all of that is essential to being a good mariner.

“Sailing’s not for everyone, but the lessons learned apply directly to what we do with the majority of our students. We’re committed to making the sailing program a fun and adventurous option for anyone interested in being on the water.”█

Please use the “Comments” section below to add to this story if you have more information related to team history or corrections.

3 Comments on "Hard to Windward"

Great article and many thanks to Phil, Tim, and all involved in MMA’s Sailing success; and let’s not forget Dunk. As a former team-member aboard Maritime Express, I want to clarify one point and give credit to Mariner who won GMORA in 1992. We were nipping at Mariner’s transom all season likely due to the fact that (it is rumored) we were distracted by [friends aboard, not on the team, who] slowed us down just a touch.

Sailing at MMA is one of my many highlights from the 6 years I spent in Castine. I learned many things from small boat sailing. Coach Minson always told us that the small boats were where you actually learned how to sail, he was right. I am a much better ship-handler and sailor for the lessons the Bagaduce River and Castine Harbor taught me. Thank you MMA Sailing and good luck team on all future regattas!