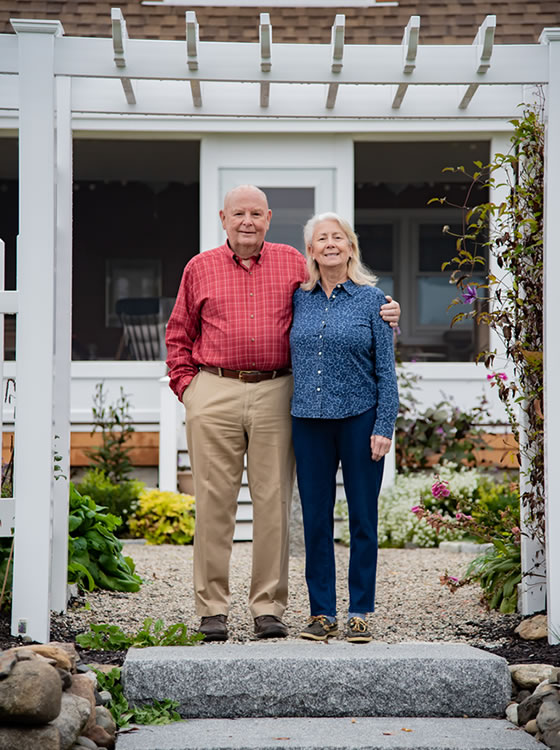 More Than a Home Away from HomeFamilies who host students as part of the Castine Sponsor program touch lives in many ways.by Laurie Schreiber

More Than a Home Away from HomeFamilies who host students as part of the Castine Sponsor program touch lives in many ways.by Laurie Schreiber

At the home of Carol Adams and Rick Armstrong, as many as 20-25 Maine Maritime Academy students may show up for a special open house dinner.

“Every time I ask the kids, ‘What do you want to eat?’ they say, ‘Really good steak,’” Adams says with a laugh. “That’s our most well-attended event.”

A good home-cooked meal is just one of the benefits available to students through MMA’s Castine Sponsor program. Armstrong and Adams are long-time participants of the program, which pairs local families with one to two incoming students from out of state each fall.

The program provides new students, many far from home for the first time in their lives, with a substitute family, so to speak.

Sponsors are happy to introduce students to the area, invite them into their homes for meals, provide transportation to the airport at vacation time, bring students along on grocery runs, invite them for family activities such as sailing, fishing, or attending local events, or just allow them to hang out.

The relationships are available to the students throughout their time at MMA, so long-time sponsors might have 8 to 10 students on their roster.

“One thing about Maine Maritime—they have incredible resources to help students who are struggling in any kind of way, academic or otherwise,” says Armstrong. “We’re a little cog in that wheel, and we’re pleased to do it.” 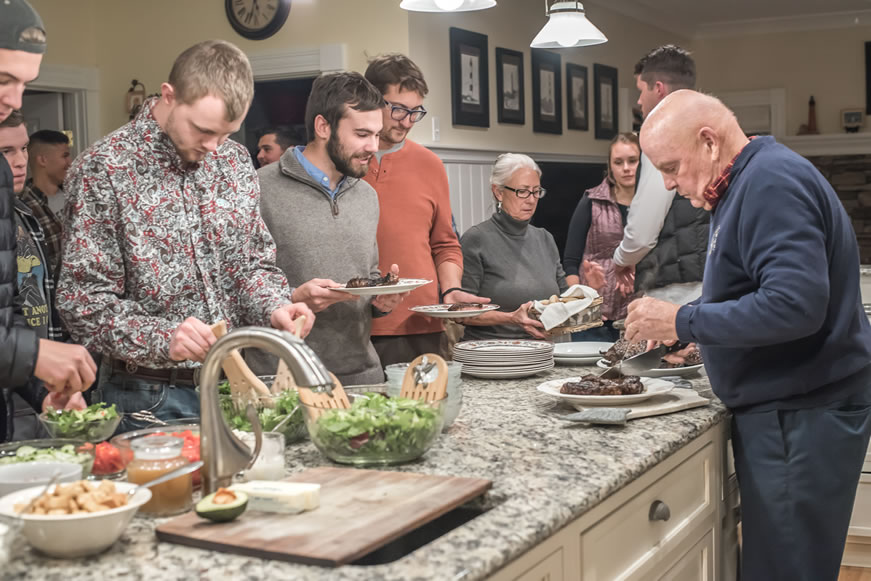 Adams and Armstrong sometimes host not only their sponsored students, but also other students for special meals.

Started by Jeff and Susie Loustaunau in 2001, about 20 families are involved in the program today. The Loustaunaus got the idea when their daughter and son attended the U.S. Naval Academy in Annapolis, Maryland, which has its own sponsor program.

“We saw real benefit in that and thought it could work here,” says Jeff. “These are kids far from home and in a very different environment, especially the students who are in the regiment. The idea is to give them something similar to a home where they can go and relax, maybe have a home-cooked meal.”
In addition, says Susie, “We thought it would be good for people in the community to have contact with students so they would get to know more about the school.”

Armstrong and Adams moved to Castine in 2008 for retirement. Armstrong connected with MMA through its tidal energy program, then became an adjunct professor of engineering. (Adams formerly worked in finance for a global company. Armstrong’s former positions include marine engineer, boatyard and marina owner/operator, and head of port security for the State of Massachusetts.) They learned of the program from the Loustaunaus and decided to give it a try in 2010.

“It was another dimension of getting involved with the students,” says Armstrong. “It’s one thing to see them in the classroom but another to get to know them in a more residential environment.”
Since then, they’ve become enthusiastic participants, “officially” hosting 16 to 20 students. “At any given time, officially, we have two students for each year for the five years,” says Adams. “But unofficially, we have quite a few more.”

“They always have friends, and we encourage that,” says Armstrong. “We have a good-sized boat shed, and there’s lots of stuff in there that I brought from the boatyard and from my hobbies. They really get engaged in that.”

Plus, they love to entertain. Fall weekends see students swarming the couple’s apple trees, plucking fruit and pressing it for cider. Sundays are pretty much open house with evening supper. Planned events include that steak dinner, plus a big cookout during Homecoming weekend and a lobster bake for graduation.

“By then, we know the students and their families pretty well,” says Adams. Generally, we have parents staying with us by that time.”

Matthew Breuer had Adams and Armstrong as his sponsor. “It felt like I was home every time I was over there,” he says.

Breuer, who is from Alton, New Hampshire, enrolled at MMA in 2013. Majoring in marine engineering technology, he graduated in 2017 and is now a U.S. Navy Civil Engineer Corps officer.

“They kind of adopted me and my friends. I’ll never forget the big party they threw for me, with a big, old-fashioned lobster bake, the day I graduated.”

Breuer recalled receiving an email from MMA before the start of his freshman year. “It says, ‘If anyone is interested in having a host family, please respond to this email,’” Breuer says. “It sounded interesting. Why not?”

A couple of weeks after arriving at school, he met Armstrong and Adams during a meet and greet. “After that, they started inviting me over for dinner,” he says.

Breuer found the couple was available for anything he might need.

“Rick would let me use his tools,” he says. “They would let me bring my friends over to hang out or watch football. They kind of adopted me and my friends. I’ll never forget the big party they threw for me, with a big, old-fashioned lobster bake, the day I graduated and was commissioned into the Navy.”

Some students look at the program in strictly practical terms—a ride to the airport or an overnight stay. But for most, the relationship becomes a form of support.

“It was really helpful,” says Edison Ma, a 2018 graduate in Marine Systems Engineering and now an engineer for the American Bureau of Shipping. Adams and Armstrong became Ma’s sponsor in his junior year. “It was a personal experience, to get to know them well, to have a place to get away from campus on weekends, and to have someone who lived close by and could help out just in case anything happened.”

Ma says it’s also a great way to connect with upperclassmen in a casual setting.

“Because there were two students per host family each year, we could get to know upperclassmen face-to-face and learn the nitty-gritty about how they got through cadet shipping and the training cruise and so on, and then turn around when new students came in and tell them how we got through it,” he says.

“It makes them feel they’re not alone, and there are people in the community who are looking for them to succeed, so they don’t feel like they’re the only ones in this,” says Rachael Iannoli.

Iannoli and her husband, Phil Cotoni, became sponsors after moving to the area five years ago, when Cotoni was offered the position of General Manager of Dining Services at MMA. Iannoli subsequently became MMA’s Conferences and Events Director. They became involved in the program right away because they figured it would be a great way to get to know students. Like Adams and Armstrong, they’ve had a dozen or so official students. “But, I’ve had a lot of step-sponsor kids, too,” Iannoli says. “I’ve probably had 10 to 15 kids at the house at a time.”

“Italian night” feasts are big at their house. And it’s just fun to be there. 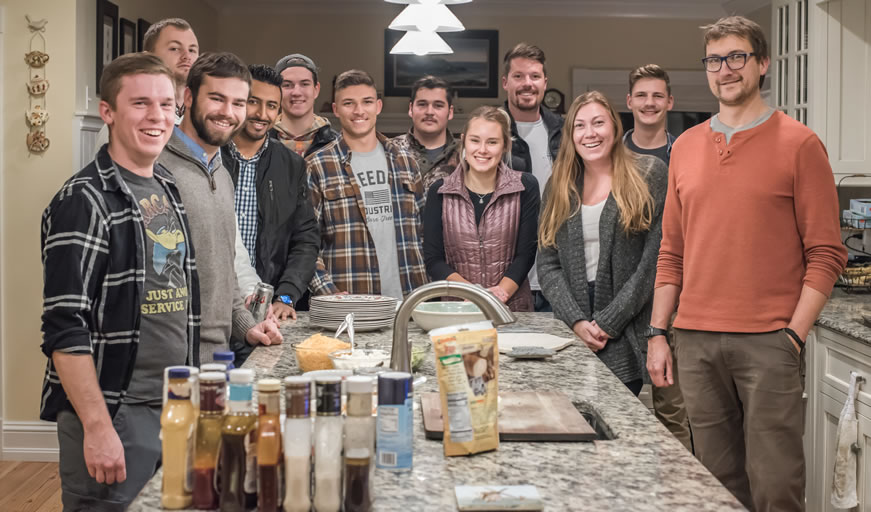 “We have dirt bikes and four-wheelers and lots of animals,” says Iannoli. “They come for dinner, or we take them to the doctor or pick them up from the airport or communicate with their families.”

For parents, the program can be reassuring and useful. Iannoli and Adams speak to occasional roles as touchstones for nervous parents.

Another strong sponsor has been Bev Bishop whose experiences with students sometimes has them attending symphony performances to broaden their cultural repertoire. “It’s a requirement,” she says. “I love my kids.”

The program fosters town-gown interaction, too. “Rick and Carol would always let me know when the locals needed help,” Breuer says.

“This host program gives many Castine residents the only way to connect with Maine Maritime,” says Armstrong. “We encourage people—they really ought to try it, at least for a year, to get an understanding of the program and the academy.”

Most poignant are the lasting friendships.

“They’re in touch all the time and invite us to changes of command and getting their wings and being part of their lives,” says Armstrong.

For more information about the program, visit mainemaritime.edu/student-life/campus-resources/castine-student-sponsor-program or contact Rhonda Varney at rhonda.varney@mma.edu.█