Homecoming: It’s PersonalAs the MMA community celebrated the opportunity to reunite, one alumnus shared lessons learned and hopes for the future.by Billy R. Sims
The highlight of festivities is the parade of the regiment and march on of the honor classes.

Frank Tepedino has seen a lot since graduating from MMA in 1958 as an engineer.

He served as an engineering officer in the U.S. Navy; third assistant engineer in the Merchant Marine; came ashore to earn a degree in industrial management and study finance in graduate school; worked for Lockheed Shipbuilding, Electric Boat, and Pacific Power & Light; and, following graduation from the University of San Diego Law School, worked as House Counsel for FMC Corp. Later he founded and was CEO of The Condor Group, a consulting and executive training firm from which he retired a few years ago.

But on Thursday, September 27, the beginning of Homecoming 2018, he looked about, walking across the early fall-green lawn behind Dismukes Hall, MUGs hurrying by, and was summarily impressed by all that has changed at MMA.

“It was a different school then than it is now,” he said. “The student makeup is different. The facilities, instructors’ roles and qualifications, and the academy’s purpose are also different.”
“We shoveled coal at 1:00 A.M. into the academy’s furnaces,” he said as he pointed to Dismukes. “We drove the garbage to the landfill, cleaned and polished the decks in the buildings, painted bulkheads…”

As he crossed the street with his wife, Carmen, he looked to Leavitt Hall and noted his dorm room was in a space now occupied by President Brennan’s office. A few minutes later, he entered the lunch line at the recently renovated dining hall and topped a new porcelain plate with fresh salad.

“We had metal plates, and you might get a dollop of ice cream atop your mashed potatoes,” he quipped.

COMING BACK, GIVING BACK

Tepedino is among some 200-plus alumni who returned to MMA for this year’s Homecoming activities, ranging from a panel discussion with students to sports events, receptions, reunions, waterfront activities, tours and classes, memorial and honor services.

It was incredible. Here’s to all our shipmates, near and far. We hope you make your way back to the academy for the next one.

Events included three days that brought alumni together to reminisce, celebrate life and career, and explore the changes that have taken place at the college. And in their own special way, many took the opportunity to give back something to MMA.

The first event Thursday afternoon was an alumni panel discussion, “Reeling in the Years,” offered to students in Delano Auditorium. Five alumni representing 60 years of perspective, from the class of ’58 (with Tepedino as panelist) to the class of 2003, shared their academic and professional experiences, offering insight on career planning and pursuits.

Among the questions the panel addressed: What was the one thing you wished you had done or participated in while a student at MMA?

“It was a mad rush from day one here at MMA until the last bell rang,” said Tepedino. “Perhaps I should have concentrated harder on some of the subjects offered. So I would admonish students to squeeze out all of the juice with your time here.

“I don’t have any regrets from my time at MMA. It set me on my course for life.”

There were discussions regarding job interviews, work/life balance, lessons learned from accomplishment and failure, and more. 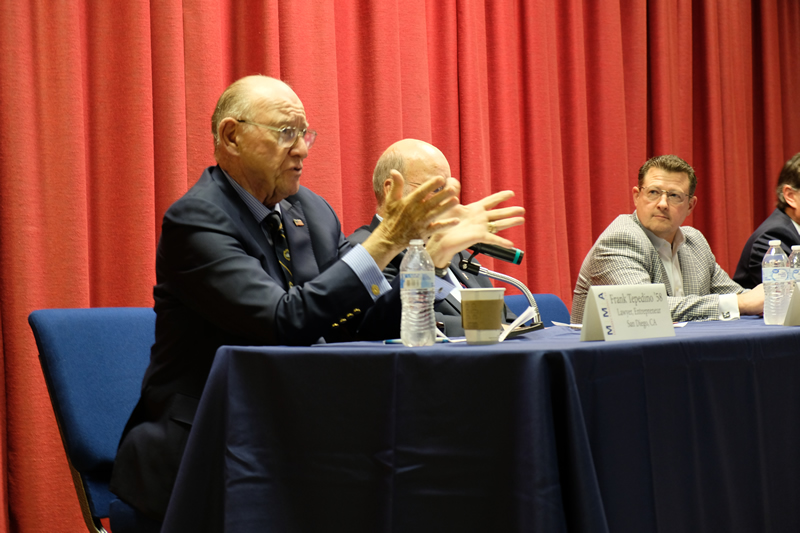 Tepedino offers advice to students during an alumni panel.

The following morning, alumni were invited to the 7:00 A.M. regiment formation. They attended their choice of classes throughout the day, teed up for golf at the Alumni & Friends Golf Classic, and some made sure they got first dibs on items at the campus bookstore.

Tepedino had his own mission. At 9:00 A.M., along with classmate Everett Cooper, who retired as a senior executive for Sea Land, a Maersk company, he met at the Waypoint with John Angelberger, a junior in Marine Engineering Operations and recipient of the Francis J. Tepedino Regimental Scholarship Fund, started in 2000.

The discussion began with questions about Angelberger’s coursework, and Tepedino suggested that in addition to his focus on engineering, he should study business and finance whenever there is an opportunity. “Even if you’re an engineer on a ship you’ll be dealing with contractors, and you will be ahead of the game if you have an understanding of contracts and law,” said Tepedino.

More advice. Several sea stories. Four students sitting nearby and listening were invited to pull up a chair and join the discussion. 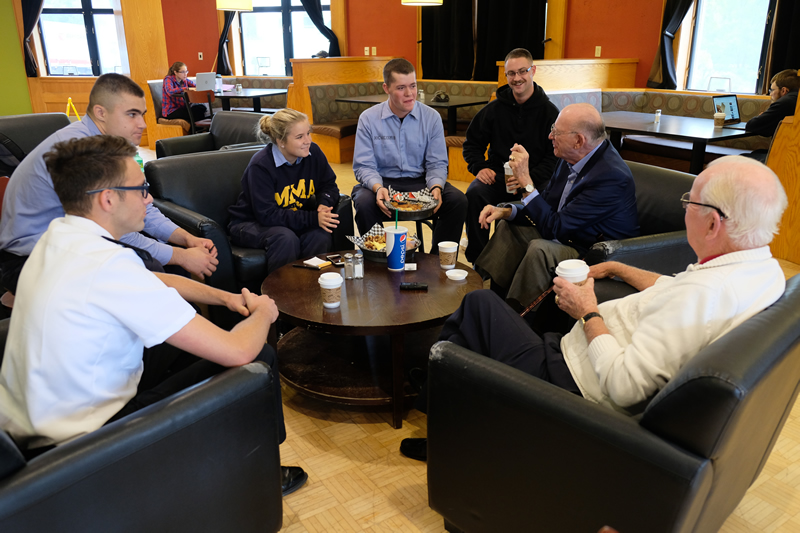 Tepedino with the recipient, John Angelberger, of a regimental scholarship he created in 2000. Other students pull up a chair to listen while Tepedino’s classmate, Everett Cooper, holds court.

As the session came to an end, Tepedino said, “I have one requirement, John. When you’re out of here and successful, you have to start a scholarship for students who are struggling, as I was.

“There was no way I would have attended MMA if a father of a friend of mine hadn’t written a check to help pay for my first year of college. My dad was a shoeshine boy from Italy. The check from that guy opened the door for me and my life.”

Friday evening’s events began with an alumni reception at the ABS Center for Engineering and Science. Within a half hour, the reception area was shoulder-to-shoulder with alumni and guests. There were shout-outs when classmates recognized one another, firm handshakes, and hugs. Revelry.

The alumni dinner followed at the Alexander Field House. The highlight was the presentation of alumni awards.

This year’s awards included a new category, the Humanitarian Award, presented to Capt. Paul Jacobs ’58 for his epic humanitarian achievement during the fall of Saigon in 1975 that resulted in the rescue of more than 30,000 lives. (View a brief video profile of Jacobs at youtu.be/CUiLjY53nH4). The 2018 Wall of Honor inductees were Rear Adm. Thomas K. Shannon ’82 and Rear Adm. Bryan P. Cutchen ’83, and the Outstanding Alumnus recipient was Eugene H. “Gene” Spinazola ’61 (posthumously).

Saturday morning, before the big crowd assembled for tailgating, tall tales, and the football game, there was a pause.

A small group quietly gathered to dedicate a new memorial plaza behind the Alfond Student Center that pays tribute to MMA alumni who have perished in the line of duty and those lost at sea. The memorial consists of a new granite monument funded by the class of 1962 with the list of those who have passed over the bar, a bronze plaque donated by the class of 1949, as well as a 3-inch, 50-caliber gun with which early academy classes trained before shipping out to war.

Up the hill, soon thereafter, members of the class of 1958, including Tepedino, family, and MMA community members, gathered before the flagpole for an Eight Bells ceremony to mark the passing of their own.

With a blue sky and the deep green of the new turf at Ritchie Field providing the setting late in the morning, Mariners new and old gathered for the culmination of Homecoming festivities.

First came the recognition of newly inducted MMA Athletics Hall of Fame members, (see pg. 9 for details.) Then members of the Honor Classes from 1943 to 2013 conducted a march onto the field. Representing the class of ’43-2, Gerard Rod Nelson waved from his chauffeured golf cart to the applause of the crowd.

The game began, accompanied by family photo-taking sessions around the stadium and groups gathering under the awnings designating Honor Classes along Pleasant Street. The crowd noted highlights of the game with applause and cheers. 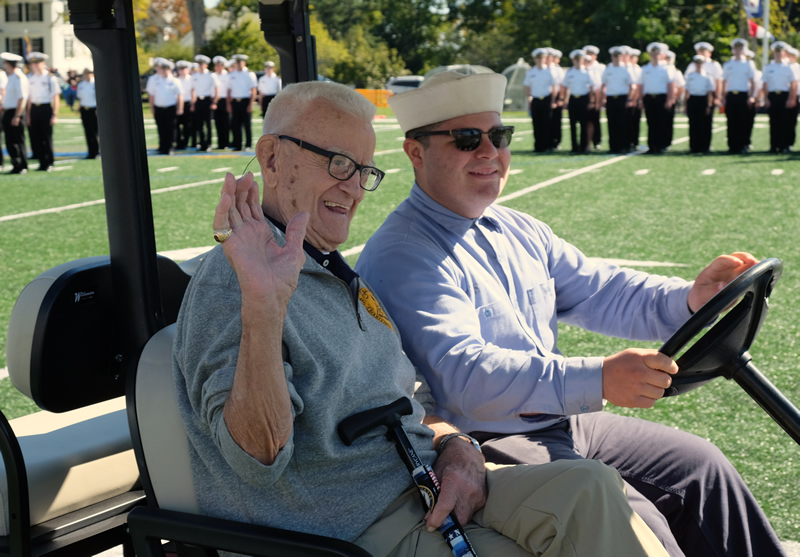 Gerald Rod Nelson ’43-2, the most senior alumnus to attend, has a smile for the crowd.

But all too soon the game was over, along with Homecoming until next year.

“It was incredible,” said Pete Mento ’93, who offered this salute: “Here’s to all our shipmates near and far. We hope you make your way back to the academy for our next one. I am intensely proud to have graduated from this amazing academy and so blessed to have sailed with the men and women who were there with me.”█