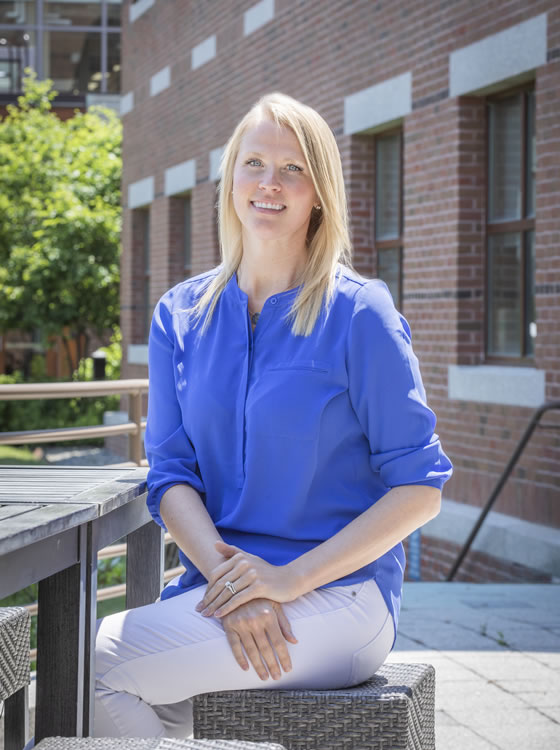 BROOKE MCDONALD ’08 took a circuitous path from her time as a Maine Maritime Academy graduate student to her position as a senior financial analyst at The Jackson Laboratory (JAX) in Bar Harbor.

After earning her bachelor’s degree in finance from Bentley University in Waltham, Massachusetts, she enrolled in the MMA Loeb-Sullivan School of International Business and Logistics Global Supply Chain Management graduate degree program. Her goal was to expand her knowledge to the maritime industry and take it to a global setting.

Upon graduation in 2008, she was hired by Cianbro, the Maine-based general contractor, as a financial analyst. In 2014, she came across a JAX job posting for a grants financial analyst. Attracted by the opportunity to work for a nonprofit research organization, McDonald found that MMA’s graduate coursework—in areas such as finance, logistics, and management—translated well to her new position.

“The coursework required us to apply principles to solve real-world scenarios. The IBL program encourages teamwork, collaboration, and out-of-the-box thinking,” she says. “This is all relevant to my work at JAX every day.”

When you think about it, McDonald’s path made sense. As one of some 13 MMA graduates employed by JAX, her story reflects the ability of an MMA education to prepare graduates for just about any type of career, whether it’s directly related to the student’s original course of study or not. Thanks to MMA’s approach, with a focus on hands-on learning and innovative thinking, students gain more than a programmatic education. They learn how to follow the natural progression of their interests and adapt the core of their education to new employment opportunities.

The MMA cohort at JAX is an excellent illustration of these principles. MMA graduates occupy positions, from finance and logistics to law and engineering. MMA alums from practically every major department are represented at JAX—an example of how MMA’s ability to produce stellar graduates in the maritime industry transfers to entirely different technologies and businesses.

Like MMA, The Jackson Laboratory is similarly focused on innovation and creative thinking. JAX opened in 1929 as one of the world’s first cancer genetics research institutions. Pioneering the use of mice in disease research, its mice and research programs have contributed to important medical breakthroughs in areas like organ transplants, glaucoma prevention and treatment, obesity management, stem cell research, a spinal muscular atrophy cure and leukemia treatments. 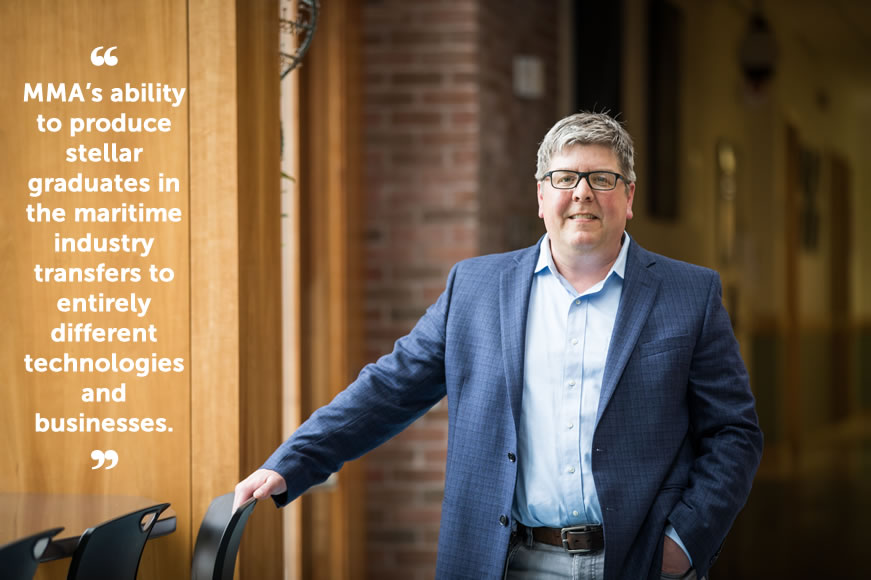 Today, JAX is a world leader in genetics and genomics research, with more than 70 scientists in Bar Harbor and at The Jackson Laboratory for Genomic Medicine in Farmington, Connecticut.

In 2018, JAX opened its state-of-the-art vivarium, The Charles E. Hewett Center, in Ellsworth to enable wider access to JAX mouse resources. Overall, its mission is to discover precise genomic solutions for disease and enable others to improve human health. As part of that mission, JAX provides the world’s largest collection of research mouse strains to thousands of researchers in more than 60 countries.

That vibrant environment has proven an attractive draw for MMA alumni. Darrell King Jr. ’02, a Power Engineering Technology alumnus, understands the significance of JAX’s mission through his position as Chief Engineer. King enrolled at MMA after four years in the U.S. Navy as a helicopter crewman and aviation electrician.

After graduation, he worked primarily in the power industry, then took up the opportunity to work at JAX in 2018. There, he and his team run the utility plant for the Bar Harbor campus. Top-of-the-line operations are essential, not only for people but also for the millions of mice that are under JAX’s care at any given time.

“We’re here around the clock,” King says. “We monitor and are responsible for responding to changes in environmental conditions outside normal operating parameters. So, if there were a temperature or humidity alarm in one of the mouse rooms, for example, our stationary engineer would take action to correct that.”

King credits MMA with giving him a foundation in steam generation and engineering and overall background to get his foot in the door at JAX. He also credits MMA’s co-op program—three-month paid work experiences in real-world settings—as essential for moving his career forward.

“The chance to be at a power plant and to learn how to operate as a team member was one of the things that shaped how my career unfolded after graduation,” King says. “In later years, the experience of leading a team drew on those past experiences.”

“One of the things that’s drilled into you and you learn quickly, particularly aboard a ship, is the importance of teamwork and working together as a unit,” agrees Brett Witham ’93, a Marine Engineering Technology graduate. “When you’re in an engine room on a ship, you work with and rely on your watchmates. If you don’t have good communication and teamwork, bad things can happen. The same can be said in any organization. Operating in the corporate world is not dissimilar to working on a ship. You really can’t do it alone. You need a good team around you. You need people who support you and who will work together toward a common objective.”

Of all the journeys MMA alumni have taken to JAX, Witham’s is perhaps the most surprising.

Originally from Fairfield, Witham was the first person in his family to go to college. He had heard of MMA through older graduates from his high school. He liked its promise of career preparation.
“There was a neighbor who graduated a number of years earlier and had shipped out and seemed to be doing quite well for himself,” Witham recalls.

After graduation, Witham took “a pretty typical career path for a marine engineer,” he says. He worked on a variety of vessels, including a spill response boat in New Orleans, an oil rig off Malta, casino boats, and a tanker.

Earning a good living right out of the gate, he realized he had the means to pursue other interests. In 1998, he enrolled at the University of Maine Law School. Graduating in 2001, he worked for a private law firm in Auburn, then for Verrill Dana in Portland, where he became a partner. After more than a decade, it was time for a change.

“The opportunity presented itself at Jackson Lab and I thought, ‘Wow, this is a unique opportunity,’” says Witham, who serves as Deputy General Counsel. “It’s a nonprofit organization. I can focus on and work with one client to further a mission based on helping others. We’re really trying to do good things like cure cancer. That, and having the opportunity to do that on the coast of Maine, was very attractive.”

Although his career now is wholly different from his MMA training, the underlying aspects of that training translate well to law, especially when it comes to MMA’s hands-on focus. 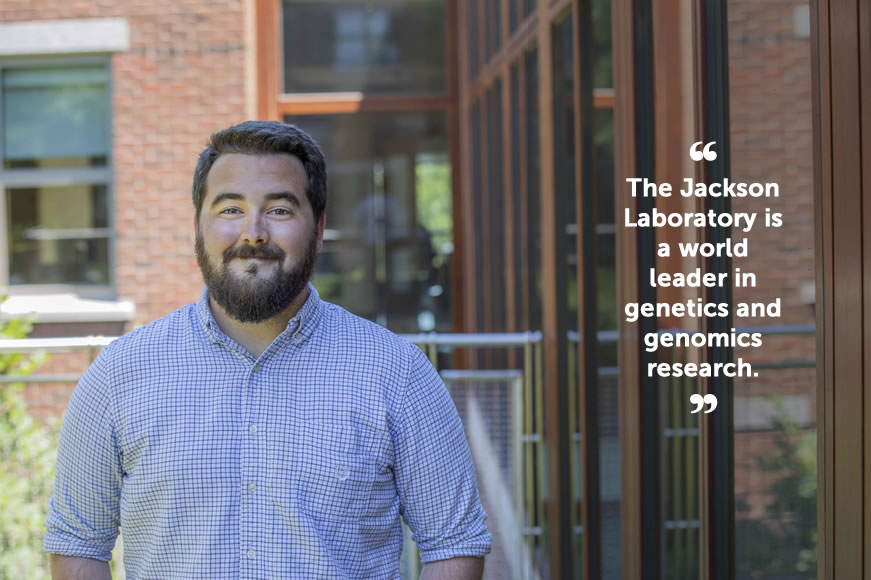 Cody Gray ’17, IT Contracts Analyst, sees shared values between JAX and MMA—striving for excellence and getting the job done, then moving forward to new goals.

“Having exposure to leadership and decision-making roles at that early stage pays huge dividends later, when you’re put into business environments and you need to be decisive and effective within a team from the moment you land—that’s a tremendous responsibility you get very early on at the academy,” Witham says. “That’s invaluable and translates well into any corporate environment. Some organizations have decent training programs. But, the reality is, you’d better be ready to perform and be effective on day one. The exposure to that through a co-op, very early on in a career, really facilitates developing the tools necessary to succeed later in life in any environment.”

MMA’s ability to prepare students for a wide array of life’s opportunities is a reoccurring theme, says Capt. Joe Curtis, MMA’s director of career services and a 1997 graduate himself.

“Whether you’re in the regiment or not, the skills and hands-on training you gain on campus give students the ability to work in just about any industry out there,” Curtis says. “If you look at our alumni over the years, a lot of them are not working in the industries they thought they would be at graduation. There’s a focus on individual responsibility, hard work and diving in and getting things accomplished. It’s across the board.”

Curtis stresses this point to students. “When we have our career fair—we had more than 90 companies last year—I tell our students, ‘You could work for any of these companies,’” he says.

MMA’s emphasis on real-life engagement with industry as part of the educational experience is key to building skills that are transferrable to just about any occupation, Curtis continues.

“It’s that hands-on, minds-on mentality,” he says. “You learn something in the classroom, then you get to apply it to real life.”

Cody Gray is at the beginning of his career but already sees how his MMA experience translates to new opportunities. A 2017 IBL alumnus, he’s now an IT Contracts Analyst at JAX. Like other MMA alumni, Gray’s journey to JAX was a bit circuitous. Straight out of college, he moved to California to do system maintenance on combat ships, working both on the engineering side and in warehousing and contracts. Missing Maine, he applied to JAX.

“A couple of days later, they reached out to me,” he says.

It turned out that some of the MMA coursework that he never thought he’d use—particularly business law, international business law, and procurement—has proven especially valuable.

“The law classes sharpened my eye in looking at contractual documents,” Gray says. “My procurement course taught me the RFP process, something I never would have expected to do.”

Gray notes that MMA and JAX have shared characteristics.

“I guess ‘eager’ is a good word,” he says. “Everyone is eager to get projects done, to move forward, to expand and develop.”

“The lab strives for excellence,” says King. “That’s certainly part of the culture at MMA as well—the goal to reach for excellence and not accept anything less.”█

This is a partial list of MMA alumni who work at Jackson Laboratory. Names listed with class dates, MMA major and JAX job title. Source: LinkedIn