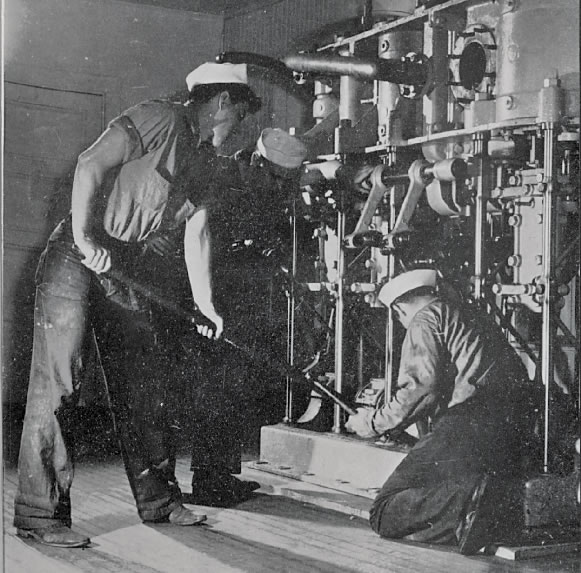 THE PHOTO FEATURED here was published in the 1946 Trick’s End yearbook, page 111. I was impressed by its dramatic lighting and composition, and asked Professor of Engineering Mike Young for clues to its specifics.

Just a week before, I had photographed Young instructing a class of midshipmen how to hand-crank a 1,000 HP General Motors EMD 567 diesel engine, which appears to be the action in this image.

“But this looks to be a small, triple expansion steam engine, perhaps for a tug, in a lab,” he reports.

There are many such visual gems throughout the pages of MMA yearbooks, which are available online at mainemaritime.edu/mariners-forever.

Perhaps your class Trick’s End has notable images worth sharing. Send us citations and information on your favorites and we’ll feature the most intriguing in the next Mariner.█

If this is and I believe it is the old triple expansion steam engine that was still in the Steam Lab on the waterfront in the 60’s I believe it is now showcased inside the Bath Maritime Museum, was restored/rebuilt by the Academy and is programed to operate with the push of a button for visitors. It was from a tugboat and was the pet baby of Lt. Hoss Jacobs.

I agree, Frank. Hoss was in his element in that old quonset hut and held to the belief that the recips would still be out there when we graduated. He was right! The Staten Island Ferry system ran Skinner Uniflow engines into the late 1970’s and there were several variations of steam engines in service on the lakes at the same time. I made a trip on the steamer, Ben Moreel one autumn from Buffalo to Duluth. She had totally automated sinuous header boilers with a four cylinder, triple expansion recip (yup, two IP cylinders). I was very thankful that… Read more »