Capt. Harry Stevens at the helm.

The Master of the Pentagoet leaves the helm with pride.

THE SLACK IN PENTAGOET’S bow dock line is not to Capt. Harry Stevens’s liking. He unwinds it from the bollard in an efficient whirl of motion, pulls it snug and secures it. He walks to the deck exit, crosses onto the dock and steps away from Pentagoet, which he has used to teach vessel handling to thousands of students. It is July 31, and after 27 years with MMA he has retired.

Stevens is a revered figure (aka The Man) on the waterfront, known for his high standards of instruction and meticulous care for the 39-year-old tug.

“A lot of people have said it’s the finest boat they’ve ever seen for its age,” says Stevens.

He first worked for MMA part-time as an AB on State of Maine training cruises, but hopped aboard Pentagoet as Chief Engineer in 1992, later becoming Captain. Since then he has taught (or co-taught) three programs that have helped launch many careers: ship handling, tug and barge operations, and workboat operations. Stevens typically taught 100-plus students per 14-week semester.

“When students first come aboard, a lot of them are nervous,” says Stevens, “but I tell them, ‘Relax. We’re going to do this. And the more you do it, the better you’re going to be.’ That’s why I never drive the boat. They do. And they have to have hands on the equipment to learn.

“It’s amazing to see them from day one until they finish. Their confidence increased. They can handle it. And that gives me great pride.”

“A lot of people have said it’s the finest boat they’ve ever seen for its age.”

Instilling a good work ethic is as significant to Stevens as proficiency handling the 1,400 horsepower tug in challenging maneuvers and tasks. “When you get a job,” he says, “be on time and do whatever it takes to get the job done. Don’t be afraid to get your hands dirty. Have pride in what you do, no matter what it is you’re doing. You’re from Maine Maritime Academy, and that means a lot is expected of you.” 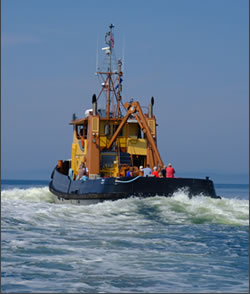 The venerable Pentagoet has served almost three decades of students, all under the careful watch of Capt. Stevens.

For the Pentagoet, Harry says, “I have a great love for the boat. I’ve been with her for many years, pretty much on a daily basis, and it’s just the best thing I’ve ever been able to do or been allowed to do.”

For his waterfront coworkers, he says, “We’re like a family. We take care of one another. There’s a lot of stuff going on here, so we have to work together. We know we have to get these different jobs done, we do it, and we’re a pretty tight group overall. I love the people I work with and always will.”

As he walks along the dock away from the Pentagoet for the last time as Captain, he pauses and turns back to take an appraising look. “The feelings right now are of pride and sadness, but knowing that the boat is going to go on and on,” he says. “The program’s going to be strong, and I feel I was a part of making that happen.”█

In the mid 80’s the Pentagoet was the first real boat I had ever handled. When I think back on the experience it was a life changer. Some would say, “it’s just a tug boat” but for many it is the first time we have such a powerful machine in our control. Deadly if not respected but almost art when handled by a skilled mariner. My thanks to Captain Stevens for being part of the building process of competent young people and to Captain Sam Teel for doing the same for me back in the day.