In the summer of 1991, as the Regimental Operations Officer, Michael Boucher ’92 and others noted the lack of enthusiasm by cadets for rowing in the lifeboats, as part of their indoctrination.

So he struck upon the idea on a Tuesday of staging MMA’s first lifeboat race competition between the cadet companies, got buy-in from the Waterfront, Commandant’s staff and others, and by Friday the incoming class was involved in creating a fun tradition that lives on.

After 26 years, Boucher will soon return to MMA as the new Deputy Commandant and have a chance to see the boats race once more.

“The tradition lives on,” he says, because it “encompasses the fostering of seamanship, teamwork and leadership while ultimately contributing to achieving the Lifeboatman Certification.” 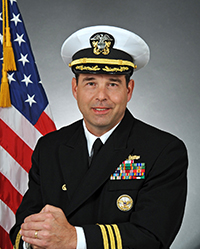 Boucher’s ability to mobilize and collaborate with others, exhibited so long ago, has served him well through a 25-year career in the US Navy, most recently as Operations Division Chief for the US Strategic Command’s Joint Functional Component Command for Global Strike. He was also Commanding Officer, Assault Craft Unit One, and more.

“My biggest life lessons from MMA,” Boucher says, “that I will strive to pass along to students: Work your hardest to achieve a goal, and if you fall short of it, take consolation that you did your best, take inventory of the shortfall(s) and improve upon them to attack the next challenge. Honest mistakes happen and are forgivable; mistakes that are born from laziness or hubris are sometimes not.

“MMA taught me to respect the sea, to take nothing for granted, as she demands and commands respect.”

While the cardinal lesson of respecting the sea is all-encompassing, “the little things we do daily form who we are,” says Boucher. “Cut no corners on the small stuff and that ethic will carry forward to completing the hardest tasks. And that is what I plan to do as the DC.

“Working with the Wedge and regimental staff, we will ensure that attention to detail and procedural compliance are not buzz words of the day but that they continue to define the MMA legacy of turning out top-notch graduates whom employers eagerly seek.”

…and people who know how to pull together when the rowing gets tough.█