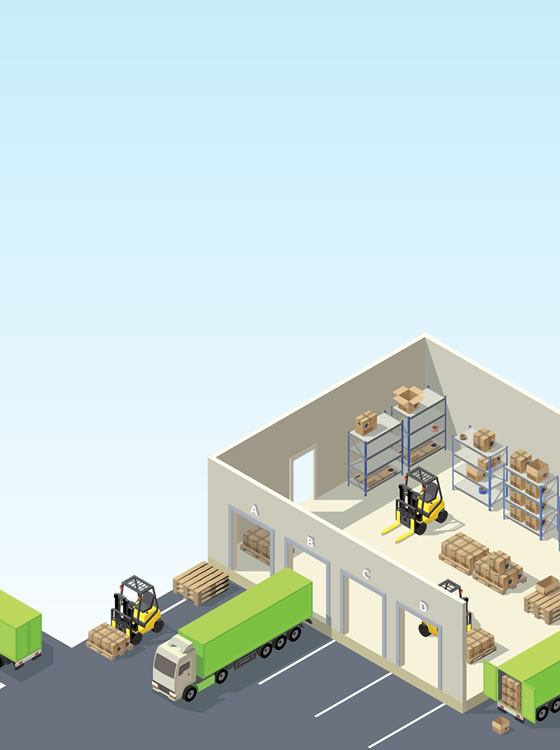 FROM AUTOMOBILES TO HAMBURGERS, we’ve all become more aware of the pandemic’s impact on the global supply chain and what can go awry with its logistics. But even with the strain of the pandemic, the logistics industry continues to be a highly desirable field. A whopping 93% of industry professionals would still recommend it as a profession to those entering the job market or contemplating a career change, according to a 2021 survey by the logistics industry magazine D.C. Velocity.

Tom Noble, Sr. ’71, Chairman of the Board at Noble Supply & Logistics, would agree that it’s a great field to get into despite the challenges of the last few years. Though, the company he started over 40 years ago may have had a leg up on dealing with emergency situations and crises since it specializes in government procurement contracts, specifically for disaster relief and war zones. But getting to this position — a well-equipped leader at the forefront of a challenging industry — was a long road for the Massachusetts native.

Noble majored in engineering at Maine Maritime Academy during the late 1960s, the Vietnam War era, well before International Business and Logistics was an area of study or sector of business. At the time, sailors in shipping were doing very well financially, and Noble was keen to get in on this. However, once he graduated and the war was winding to a close, those maritime opportunities dried up.

After a short stint aboard a research ship at Woods Hole Oceanographic Institute, he quickly realized a life at sea was not for him, and he made his first career pivot into sales, though he said those 400 days at sea were a great training ground.

“I think that’s when I learned a little bit about human nature and the ability to develop into somewhat of a pseudo salesperson,” he said. “It was an eye-opening adventure.”

Noble then went on to work for a large industrial company based in Cleveland, Ohio, learning more about sales and the domestic supply chain while he raised a young family. But after eight years with the company, he was at another crossroads; tired of the travel and missing his children’s sporting events while on the road, he decided to start his own company. He never missed another game, and, as it turns out, his eldest son, Tom Jr., would go on to play hockey professionally before eventually taking over the company.

Noble became adept at providing clients the products they needed, using a business model similar to how Amazon started, buying from local distributors and delivering them to customers without the overhead of inventory and a warehouse, beginning the business out of his home with his wife, Rosemary.

“The good news was we didn’t have trouble selling product,” Noble said of those early days. “The bad news was we had trouble getting paid for it.” 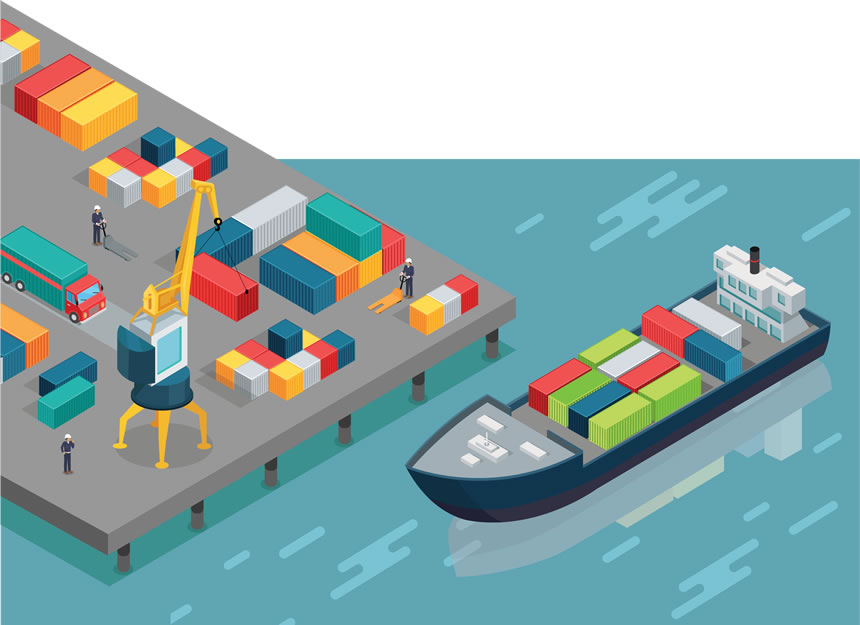 He persisted for another ten years and then heard an ad that the federal government was looking for small businesses to partner with for its supplies. He figured they wouldn’t go bankrupt, so he took a shot.

“That was the turning point for our business,” he said. “Where the company started to take root.” During the early 2000s, when hurricanes and floods were hitting the Southeast hard, Noble began developing a relationship with overseas suppliers for the tarps FEMA used to cover damaged homes and buildings.

“For two to three years, we were importing tarps [from China] by the container load, getting good at the logistics,” he said, which allowed Noble Supply to build a reputation as a company that could procure and deliver to compromised places. Over the years, Noble began to get more and more requests of a similar nature for disaster relief and war zone supplies and grew in reputation and sales, with numbers in the billions today.

While the pandemic has heightened awareness of the importance of IBL, this growing field has been gaining momentum for decades. Noble says the most significant changes in the global procurement revolution now have to do with technology.

“If someone asks, ‘What’s made your company more successful than others?’ I would say that it was our ability to embrace making it easier for the customer to do business with us,” said Noble. And that ease comes from the adoption of technology. Noble Supply has invested in developing apps and other technology to streamline its processes for customers.

Jay Harris ’73, another industry veteran and COO of Komar Distribution Services, has seen the same changes and agrees that technology has been an industry game-changer.

Harris, who was attracted to MMA for its sailing program and majored in nautical sciences, gained his first sales knowledge working for an up-and-coming sailmaker out of college. Over his years there, he helped North Sails grow to become the largest sailmaker in the world and developed its educational program, North University, which has taught over 300,000 sailors how to be better racers. So, he was in a good position to help Komar Distribution Services grow when he joined their team in 1982, leading them into the global manufacturing arena in the mid-1980s. Today Komar is one of the leaders in women’s and children’s clothing brands, with over $1 billion in sales to every major retailer. This year Komar will import 110,000 million garments they distributed from two state-of-the-art distribution centers, each over a million square feet. In the last two decades, Komar has acquired 18 different companies, solving many logistics problems along the way.

“Logistics is a microcosm of the world of business and life today — it’s all about data,” Harris said. “The first question with data is what can be created that the machine can solve? So, gather the data, and solve it with the machine. If the machine can’t do it, then find a human that’s competent and trained well enough to provide the answers routinely. That’s the middle layer. The top layer is the critical thinking part. The academy brought a lot to the table for me in terms of critical thinking.”

While the Loeb-Sullivan School of International Business and Logistics didn’t exist when Harris and Noble attended, the program carries on the Maine Maritime tradition of hands-on learning to build those crucial critical thinking skills today.

The Loeb Sullivan School of Business and Logistics, which started as a flexible graduate program in the 1980s for mariners staying on vessels, is now the only one of its kind in New England. It includes both undergraduate and graduate degrees, and currently has a total of about 130 undergraduate and ten graduate students.

Associate professor Navneet Jain ’06, who has been with the department for 16 years, has seen not only an increased interest in the program because of the pandemic, but a growing interest from businesses around the world looking at how they can make their supply chains more resilient. He sees MMA’s IBL students really prepared to take that on.

“The logistics and transportation world is ripe for new blood,” said Noble, who sees the BLS projections playing out first-hand in the industry. The field offers a great opportunity for MMA graduates, who can bring new and different ideas and ways of doing business.

“We [at the department] have been talking about how the supply chain is the most critical piece of a business’s success for the last 20 years now,” said Jain. “Many corporations and companies now realize that, and they are looking to hire. They’re looking for leaders; they’re looking for people who can troubleshoot things, for people who have a mindset of ‘let’s look at this problem and see what we can come up with to fix it.’”

The department’s faculty challenges students early on to solve real-world business problems. Students in Jain’s current warehousing and distribution course are working with a startup in New Jersey that is trying to figure out how to grow its warehouse sustainably in a new facility. MMA students are tackling questions about warehouse layout, product packaging, and the most cost-effective and efficient ways of shipping. Projects like this one are common in the department and working alongside companies in real-time problem solving helps students not only gain hands-on experience but confidence in their new field.

“They’ve done it,” said Jain. “Rather than just reading it from a textbook.”

Another way students gain confidence and experience is through an internship or co-op requirement during their junior year, where they apply as they would for an actual job and work with a faculty supervisor on a problem the business is facing to come up with tangible solutions.
Jain sees a significant change in students after their internships. “Many of them go out for their co-ops, and they question themselves, asking ‘Will I be able to do this? I’m not really sure,’” said Jain. “They come back from their co-ops, and you see a completely different person. They’re confident. Literally, after they come back from it, they say, ‘I’m ready to go out in the real world.’”

MMA graduates won’t have any difficulty landing that real-world job. Logisticians will see a job growth of 30% between 2020-2030, much faster than the average of 8% most fields see, according to the U.S. Bureau of Labor Statistics. It projects about 24,500 openings for logisticians each year over the next decade, many expected to result from replacing workers who transfer to different occupations or retire.

“The logistics and transportation world is ripe for new blood,” said Noble, who sees the BLS projections playing out first-hand in the industry. The field offers a great opportunity for MMA graduates, who can bring new and different ideas and ways of doing business.

“I would just say a very good place to initiate a frontal assault would be in the transportation and logistics business,” said Noble. “There won’t be as much competition going forward because you’ll be at the front of the curve, not the back of it.█