On the eve of her final New England Intercollegiate Swimming and Diving Association meet, and two months out from graduation, Kaitlyn Reny is busy.

Reny serves as a senior captain for the first four-year class of swimmers at Maine Maritime Academy and is the Vice President of the Student-Athlete Advisory Committee. Anyone with her skills and poise would make a gifted leader, but her resilience and disposition towards service make her an exceptional leader. Her head coach, Tony DeMuro, noted it as soon as he met her.

“Kaitlyn’s leadership is not defined by her times or performance,” says DeMuro. “She offers so much more than that. She believes in the team and actively guides them through every situation. It is not just that she is just willing to help; it’s that she expects to help.”

Maine Maritime was not initially Reny’s first choice, but when she visited another New England college with both a swim team and a marine biology program, she was handed a sheet of times on paper. She was asked if she had ever swum those times. When she acknowledged that she hadn’t – yet – that was the end of the line. That’s a tough setback for anyone, especially when that school had initially been their top choice. 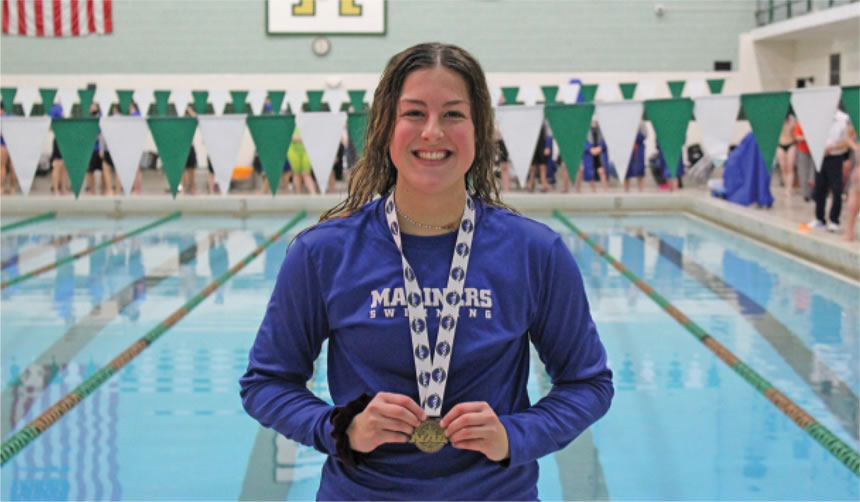 Thankfully, the impersonal nature of her visit there stood in stark contrast to her visit to Maine Maritime. Handwritten letters, a vision of the future, emails with photos of work being done on Bok Pool, and a sense of being wanted moved MMA up on her list.

“It has been cool to be a part of the growth,” says Reny. “To see the scoreboard and the records go up and share in the vision of what it is now. It’s all rewarding.”
Her name is all over the record board, but Reny demurs at the fact.

“I can’t wait for the day that my name is not up on the record board,” she says. “I know I am not the fastest swimmer in the pool. If my name is not up there, it means we have moved to the place where I wanted this team to go.”

She may be humble about the records, but the fact that she is in the pool at all is rather extraordinary.

Reny suffered from a condition known as Femoroacetabular Impingement, which led to labral tears in both hips.

The condition required two separate surgeries, one on each side. The first one came during the second semester of her first year and the second over the holiday break of her sophomore year.
The latter surgery cost her a return trip to the NEISDA Championships and required rehab with Athletic Trainer Haley Yager. Long sessions involved painful movements to regain strength and mobility.

“She showed up for every rehab session with a smile on her face and put in extra work outside the clinic so that she could get back in the pool as soon as possible,” Yager noted. Despite the long hours of rehab, Reny was at practice every day, sitting on the pool deck and cheering on her teammates.

“It was difficult at times,” Reny acknowledges, “but I was a sophomore, and I couldn’t be bitter. I knew I had two more opportunities – or I thought I did.”

“It has been cool to be a part of the growth,” says Reny. “To see the scoreboard and the records go up and share in the vision of what it is now.”

Then, COVID hit. Suddenly, the swim team was limited to 12 in the pool at a time and was without a competition schedule. As a junior captain, Reny found herself reassuring people that this would not last forever and that they would come out of the challenge stronger. A year later, the team placed second at the first ever North Atlantic Conference championship.

“Swimming was the release from an otherwise difficult year,” recalls Reny. When the team finally got to be on deck together for a virtual meet, she knew they were still a team despite the social distance. The energy was still there.

“All this stuff happened, but I had fun,” she says of the adversity. “I don’t look back and think that this sucked. I just love the sport, and when you love it so much, there is nothing that will stop you from doing it.”

After taking a left off stage, degree in hand, Reny will make another left at the end of the Castine Road and head south for Virginia. She has applied for jobs at the Virginia Institute for Marine Science, and she has her sights set on shellfish aquaculture. She likes being in the field more than in the lab, something she learned during her internships. She also learned about the value of an MMA education when she recognized how prepared she was relative to her peers.

It has left Reny facing the unknowns of her future without an ounce of fear. She wouldn’t have it any other way.

“As MMA students, we can do anything,” she says. Recent history proves that she sure can.█