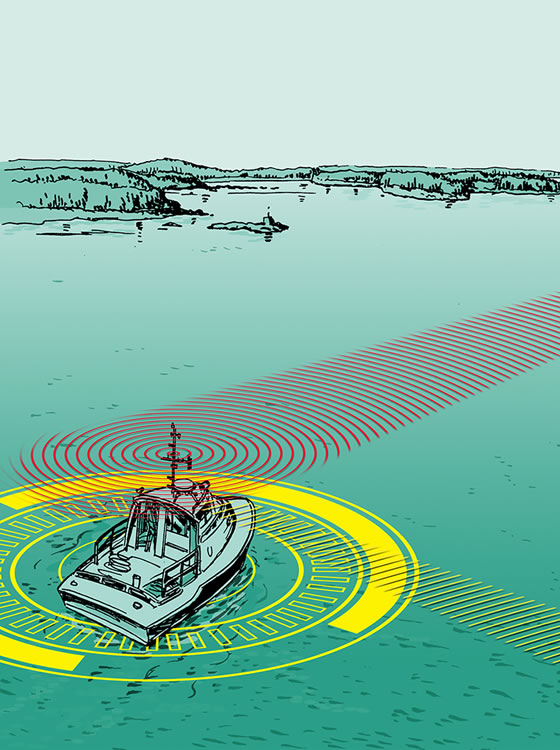 Smart Ship Technology Comes to MMACollaborative project provides hands-on learning experiences for the latest vessel technology.by Billy R. Sims
As part of an advanced vessel control educational project, an MMA vessel will be equipped with controls and sensors that allow it to be autonomously or remotely driven from shore, with collision avoidance capabilities.

With a wrench in hand, Mary Shea climbed into the bilge of a boat in Portland, Maine harbor that gave little hint that it is a harbinger of the future.

During the demonstration, the boat, commissioned for the Marine Spill Response Corporation with support by MARAD, was alternatively commanded from shoreside by a Sea Machines operator and a second vessel in the harbor to perform autonomous waypoint and gridline tracking, as well as remote-controlled deployment of an onboard boom, skimmer belt and other response equipment.

While the vessel operated autonomously in the harbor, Sea Machines’ Lauren Lamm, vessel test lead, explained that an operator using the company’s autonomous-command and remote-helm control system, called SM300, can command and control the skimmer from anywhere in the world that has a network connection. 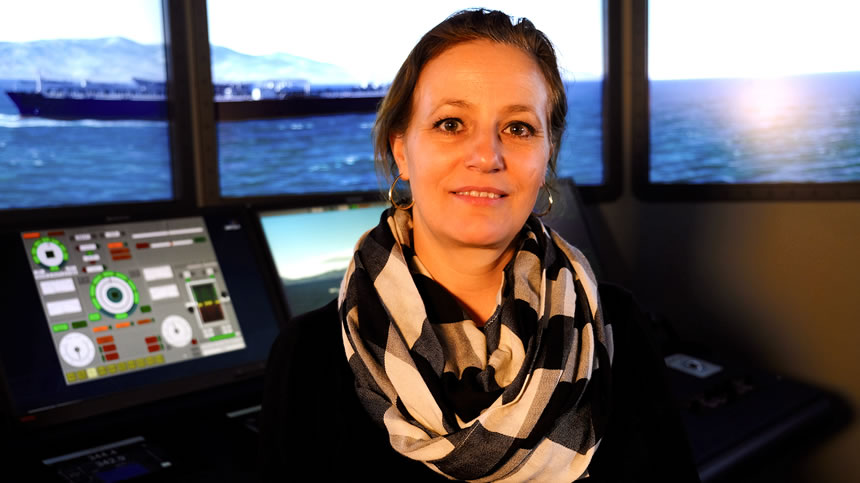 The operator can plan ECDIS-based paths, track waypoint following and record voyage data. Real-time situational awareness is provided and a human operator can adjust or override vessel controls at any time. She also said two vessels can autonomously collaborate with exact matched speeds and courses, creating a force-multiplier effect over large surface areas – such as large spill zones.

At one point, Deputy MARAD Administrator Richard Balzano ’89 donned a portable Sea Machines remote-helm control beltpack around his waist and took a turn commanding the boat from the shoreline.

“We are here because we want to help the maritime industry evolve,” he said. “This technology is here, and it will make you a believer.”

After her summer experience with Sea Machines, Mary Shea is certainly a believer. “This is a great example of a job that can now be done safer with fewer people onboard in a potentially dangerous environment.”

Shea’s experience was made possible after Marine Transportation Assistant Professor Capt. Jennifer Norwood led a trip to Sea Machines for MMA’s Women on the Water student club. She helped parlay a collaborative agreement between MMA and Sea Machines, funded by MARAD and the Boston Marine Society, into a project that will introduce autonomous vessel operations to the MMA classroom, fleet, and labs.

“We call it smart vessel technology,” says Norwood. “Providing our students the opportunity to gain and learn from the technology is in line with MMA’s mission to provide the best marine-related education of any small college.”

To accomplish this, MMA is anticipated to install an SM300 system aboard the 41-foot utility RV Quickwater when one of its two engines is replaced this spring. The new engine and the boat’s operational equipment will be rigged with controls and sensors that allow it to be autonomously or remotely driven, with collision avoidance capabilities in place.

The project will be the basis of a Smart Vessel special topics course.

A shoreside control center (SCC) will be created in the BIW building on the MMA campus to serve as a control station for Quickwater, and emissions and performance will be monitored by a setup in the school’s Medium Speed Engine Lab (MSEL) in Andrews Hall on MMA’s waterfront. For shoreside operators, Sea Machines will stream live data feeds from cameras, sensors and other equipment into the SCC for real-time situational awareness into vessel operations on the water.

Norwood acknowledges the buzz and controversy surrounding autonomous vessel development, which also has been affected by land vehicle issues in the news. “The leap of thought to the idea that major ocean-going vessels will soon be unmanned and therefore reduce the maritime workforce is unrealistic,” says Norwood.

Smart vessel technology will have the most significant initial impact on the small, near coastal and inland vessels, such as tugboats, ferries, and workboats on which the majority of MMA’s Vessel Operations and Technology graduates work. 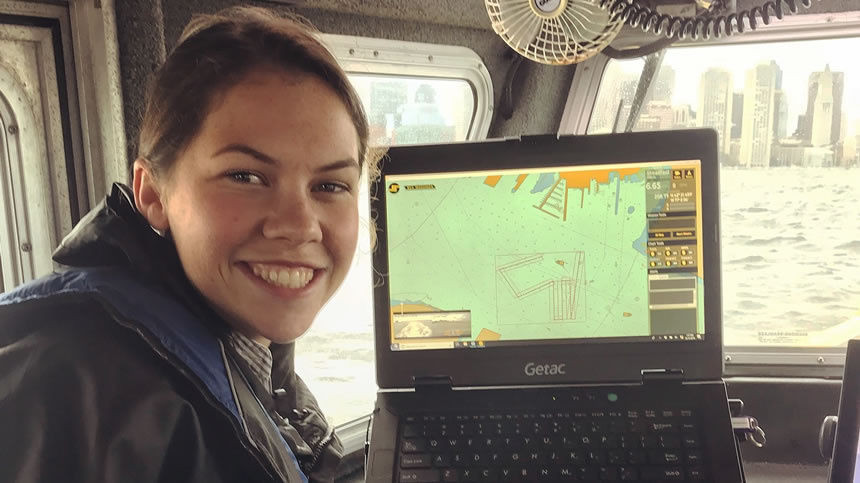 “The technology inroads for vessel operations are occurring on an international level but in niches, such as the MRSC skimmer operations vessel and other examples such as vessels that support marine survey, fire, patrol, offshore wind, or aquaculture operations,” says Sea Machines’ Don Black, vice president, sales and marketing.

Sea Machines systems are unique because the technology installs aboard new or existing vessels using only 10 components. Designed to integrate with most on-board equipment and machinery, the autonomous command and remote-helm control capabilities can be installed aboard commercial vessels quickly.

Other leaders in autonomous technology include Kongsberg Maritime, a Norwegian company that produces systems for positioning, surveying, navigation, and automation to merchant vessels and offshore installations. The company recently acquired Rolls-Royce Commercial Marine, a smart ship technology leader, and has several projects underway from building and testing an autonomous, electric-powered inland container ship to autonomous technology for ferries.

A fully autonomous ship would be considered a vessel that can operate on its own without a crew and monitored from a shore control room. Remote ships are those that are operated by a human from shore, and an automated ship runs software that manages its movements. As the technology matures, more types of ships will likely transition from being manned to having some autonomous capabilities. 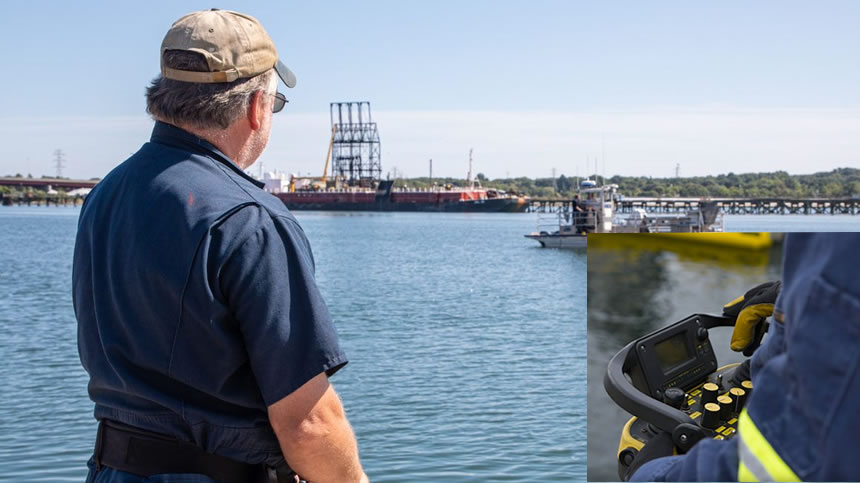 A Sea Machines Robotics operator controls a skimmer boat with a remote-helm system in Portland Harbor that demonstrated how jobs such as oil spill containment can be less hazardous.

“Fully autonomous, crewless vessels aren’t yet the reality,” says Black. “Sea Machines’ technology available now is ideal for supervised autonomy, in which mariners man automated boats and take advantage of the increases in productivity, predictability and safety that our ‘always on watch’ systems bring to on-water operations. Autonomy gives mariners the opportunity to expand into new, non-traditional roles that will likely bring greater safety and higher-level tasks.”

For the MMA Smart Vessel project, a marine systems engineering capstone project student group will be involved in the installation of the new Quickwater engine and SM300 system, followed by testing and solving maintenance issues. Also, the students will outfit Quickwater with equipment to monitor its engines’ energy efficiency in autonomous and manual modes. (Quickwater is a former Coast Guard utility boat utilizing twin-propeller drive and powered by twin Cummins VT903 diesel engines.)

Performance data from Quickwater will be sent to equipment in the METEL (engine) lab in order to model a real sea state performance load profile that can be translated into the simulated operation of the lab’s 1,020 kW medium-speed Wartsila 6L20 diesel engine, which is closer in magnitude to a merchant vessel. 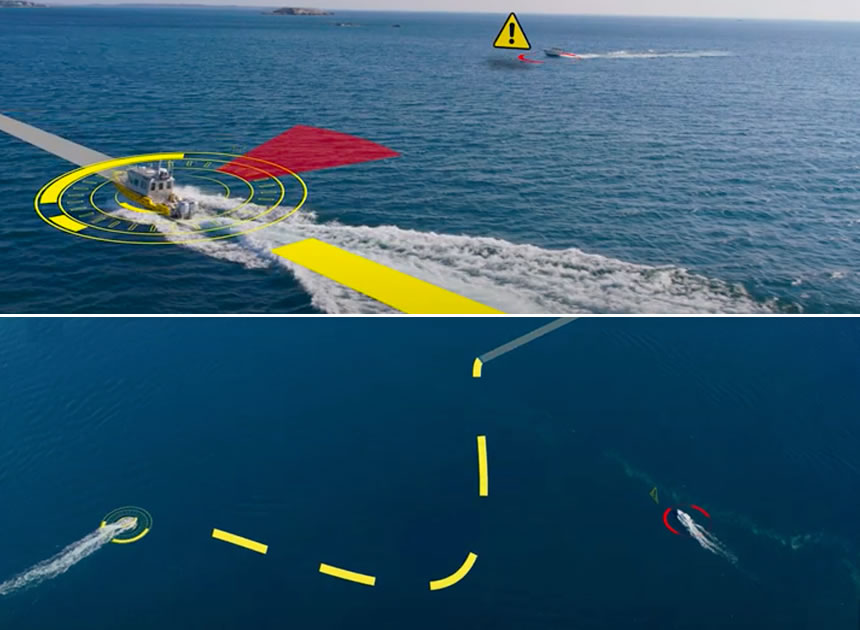 A system is available now that allows vessels outfitted with automated control and sensor equipment to detect possible collisions and calculate and steer alternative courses.

Quickwater will also be equipped to collect data on environmental conditions such as wind and waves through sensors, and the data will also then be transferred to the METEL lab.
In the following project phase, data from the Quickwater and METEL lab will be brought together in a shore side control center where deck and engine students will work side by side to manage the vessel remotely.

The project will also be the basis for an anticipated Fall 2021 special topics course, Smart Vessel: Enhancing Situational Awareness, co-taught by deck and engineering professors.

This technology is here, and it will make you a believer.

As the marine industry workforce ages, says Black, modern technology will play a role in drawing in younger recruits. “In this day and age of smart phones and TVs and self-parking cars, the next generation of mariners will not only appreciate and respect the capabilities of modern smart ships, but will also expect it.”The MMA Smart Ship project will lead to the development of curriculum enhancements that prepare deck and engine students for long-term careers with this new maritime disruptor, says Marine Transportation Department Chair, Capt. Richard Miller. “It will open up MMA students to new opportunities within the maritime industry.” 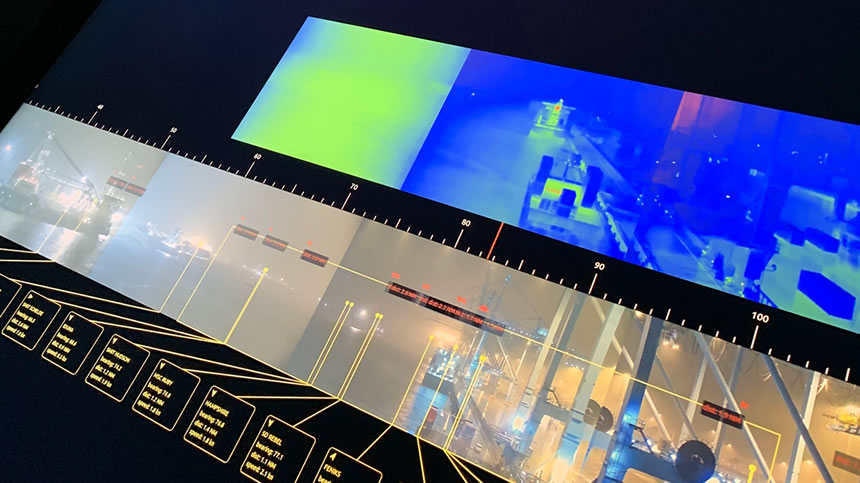 After her summer internship with Sea Machines, Mary Shea has also worked as an assistant for Engineering Professor Dr. Don McCann, who teaches electronics and control systems engineering classes and is revamping his curricula to reflect advanced ship technology.

“My internship with Sea Machines was eye-opening and very hands-on,” she says. “I have a much greater understanding of how the maritime industry is progressing, and I am conscious of the impact that new technology will have on our industry.

“I still plan to ship out and become a merchant mariner upon graduation,” she says, “but I’m confident my work in smart ship technology is not over. I want to help shape it to make the maritime industry safer, more efficient, and reliable.”█