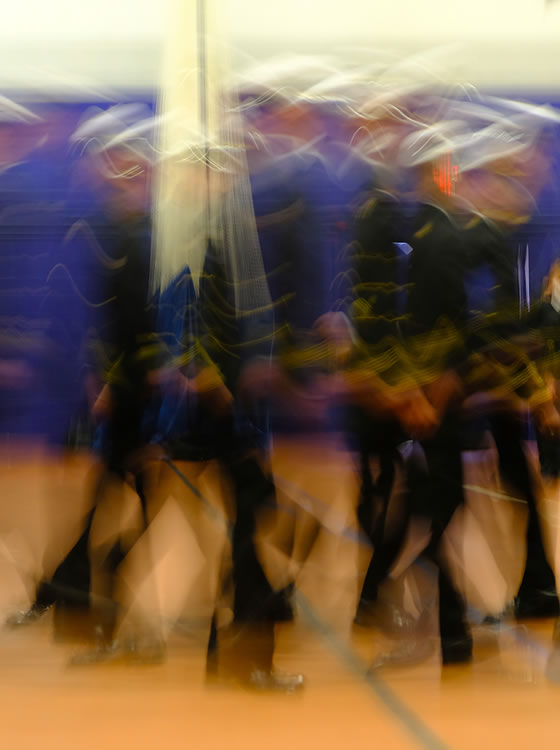 Is the Regiment Still Relevant?The answer is not surprising.by Stephen Rappaport

Is the Regiment Still Relevant?The answer is not surprising.by Stephen Rappaport
Formations of midshipmen cross the field house floor to exchange positions symbolically in the 2020 Regimental Change of Command, February, 2020.

When Maine Maritime Academy admitted its first class in October 1941, there was no question of what role the Regiment would play in the development and training of new Merchant Marine officers. Most of the world was at war, and while they did not know it, the United States would be, too, within a matter of weeks.

MMA’s first class of midshipmen, the “solid 28,” graduated in May of 1943 after a truncated course of studies. The graduates were commissioned as officers in the Merchant Marine and U.S. Naval Reserve and many immediately entered active duty or served aboard merchant vessels in support of the ongoing war effort. These graduates were often required to follow military discipline and command structure while serving in wartime conditions.

The hazards they faced were legendary: merchant mariners died at a rate of 1 in 26, which equated to the highest casualty rate of any military service.

Governance of the state maritime academies was the province of the U. S. Maritime Commission, a predecessor of the current U.S. Maritime Administration. Federal regulations required all state maritime academies to operate and train in a military structure to prepare graduates for their impending service. Faculty were required to have seagoing experience and, like the students, wore Navy-style uniforms. In addition to wearing service uniforms, students were indoctrinated into military command structures, lived within a strict code of conduct, and endured discipline through a demerit-based system, all to prepare them for service within or alongside the U.S. Navy. 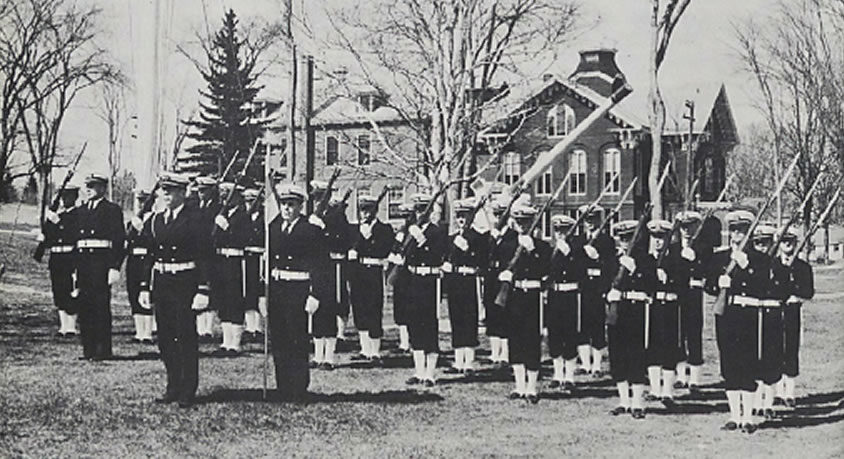 B Company in formation for the 1941 MMA yearbook. The Second Class would soon man merchant and Naval ships that sustained victory in World War II. Rigorous discipline was demanded to foster leadership and preserve lives, a requirement for today’s mariners, as well.

While much has changed at MMA and throughout the world, Federal rules still require state maritime academies to employ a “regimental program that utilizes a demerit-based disciplinary system” for those students striving to earn their unlimited deck or engineering officer license from the U.S. Coast Guard.

But, does the regimental program and demerit-based system best serve the educational purpose of training 21st century maritime professionals?

“First, it provides a structure for them to develop the self-determination, habits, and integrity to be successful.

“Second, it serves as a leadership laboratory where, day to day, they are challenged to meet standards, to help their peers attain those standards, and to hold themselves and their peers accountable.

“I also remind students of the importance of team building, to be a part of a group that you trust and rely upon, and where others can rely upon you.
“You can’t do it alone, and you’re better for it because of the strong team that you have.”

Lieutenant Kyle Willette, Class Officer, says, “The best thing the Regiment offers is how to be a leader in all aspects and, in particular, in a crisis or dangerous job situation.”

A recent study by the International Maritime Organization, notes Willette, concluded “failure to lead” was the significant cause of many catastrophic events in the maritime industry and emphasized the need for “quality leadership training” of the kind provided by the regimental system.

While industry experts agree, do current midshipmen understand the need? 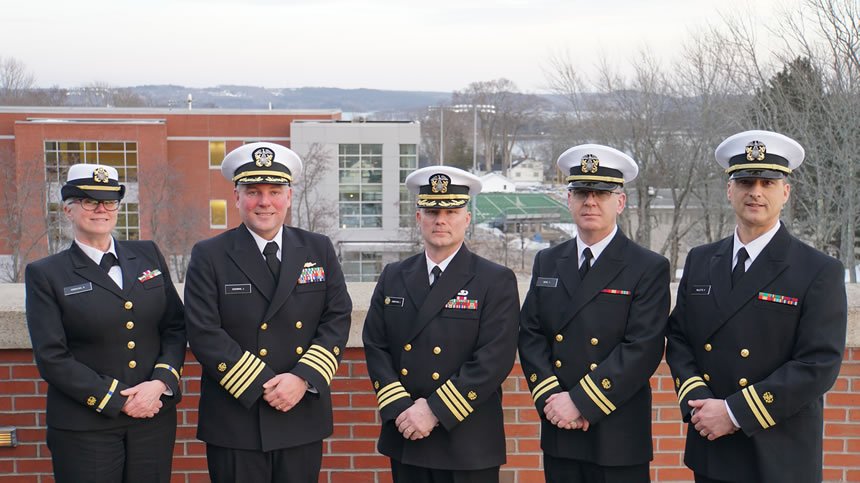 Go for the Goal

What starts as an amorphous group of young people from disparate backgrounds becomes, after four years, “one unit in which everyone works together, and everyone shoots for the same goal,” says Midshipman 1st Class Dylan Gooch, a Marine Engineering Technology major.

The most notable impact comes when members of the Regiment embark on their summer cruises aboard the TS State of Maine during their freshman and junior years and onboard commercial vessels sailing around the world during their sophomore year.

But professional leadership lessons begin before the first cruise when MUGs (Midshipmen Under Guidance) learn the most fundamental teamwork and leadership skills through experiences such as the Monomoy rowing program. (See “Rowing With Heart,” Mariner, 2018 – Issue 3).

“Rowing a boat at sea together, as we all know, takes a great amount of coordination,” says Commander Lonnie Christian, Deputy Commandant. “With four pairs of oarsmen rowing side by side and a coxswain leading the boat, steering and giving commands, there is a huge learning opportunity. It’s a great way to experience becoming part of a team and working hard for a particular goal.”

MUG training is just the beginning of progressive leadership opportunities the Regiment provides students as they advance through the ranks from 4th to 1st Class midshipmen.
“Even commanding and moving platoon-level units of MUGs around the campus allows the upperclassmen to develop leadership skills,” says Christian.

Why the bother of squaring corners instead of following a straight path? Sitting up straight at meals? Wearing khaki uniforms all the time?

From early professional development classes, 4th Class midshipmen learn the basics of leadership through assigned readings and classroom discussions, occasionally led by outside professionals and alumni. The classwork focuses on the Regimental core values of honor, loyalty and the devotion to duty in addition to general leadership principles such as looking out for your crew and paying attention to details. These values and leadership principles are introduced from day one as they are all written in each midshipman’s personal copy of the Maine Brace knowledge guide.

Fourth Class Midshipman Sara Sofia Stentardo came to Castine from her native Italy, after two years as an exchange student at Dover-Foxcroft Academy, to enroll in MMA’s strenuous five-year Marine Systems Engineering program. Before coming to Maine Maritime, her interests were the arts—she was a ballet dancer—and mathematics.

“Once I got here, it was a shock,” says Stentardo. “There was the screaming by upper-class Strykers (Midshipmen Training Officers) who introduced students to MMA during the 10-day RPT (Regimental Preparatory Training) period before classes began.”

Why the bother of squaring corners instead of following a straight path? Sitting up straight at meals and not gazing around the dining hall? Wearing khaki uniforms all the time?

Now, she says she understands all those things helped transform a group of strangers into a cohesive unit. At the end of RPT, Stentardo was appointed as a MUG Company Commander, and suddenly, “it was just me making sure my company was there, taking responsibility that my company knew what to do.”

Next, midshipmen learn via the training cruises how to live in close quarters and function aboard a ship with others, including the professional crew. “They learn, for example, how to conduct themselves in a foreign port on liberty and re-board the ship ready to go at a moment’s notice,” says Christian.

Starting their sophomore year, midshipmen have gained experience and confidence, says Chief Warrant Officer Anne Kowalski, Regimental Program Officer. “They’ve proven to themselves they can do things they had no idea they could do.”

Cadet shipping, between the midshipman’s second and third years, delivers further opportunities to participate in “real world” situations onboard vessels, seeing and putting leadership into action.

That is all preparation, says Lieutenant Trevor Snow, Class Officer, for the summer cruise at the end of junior year when each rising 1st Class midshipman is responsible for supervising a group of 4th class students during their first cruise. Here, they exercise a higher level of leadership skills developed as they rose through the Regiment.

Professional mariners often face the need to make critical decisions in situations where regulations are plentiful but oversight rare, at least until those decisions come into question. MMA, like all state maritime academies, faces the task of training mostly young, immature students, through a relatively short period, to operate under those circumstances and draw on their resources to do the right thing and be able to rely on other mariners to do the same.

Accountability, like leadership, can be learned, according to Cashman. “The Regiment helps build such self-determination within the student because there is structure with consequences if you don’t follow it.” 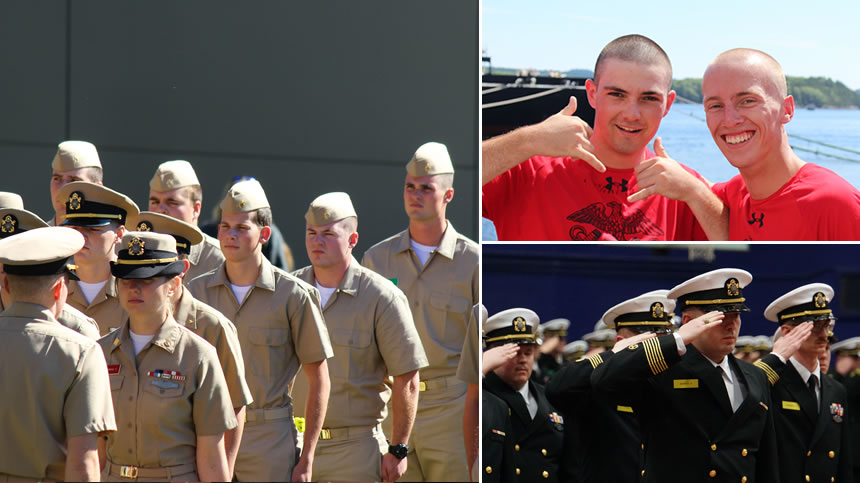 Many aspects of Regimental life are the same as always: regular formations in uniform, and the proverbial MUG shot — smiles or frowns and hand gestures (“shaka,” used to express approval and solidarity) .

The Regiment “provides experiences which produce graduates who are more oriented towards leadership, accountability, and loyalty, as opposed to those without the benefit of a regimental-type program,” says Christian.

The Regiment “is about gaining confidence that you can make the right decision, if necessary, quickly and under duress in a stressful environment,” says Willette.

“The Regiment prepares graduates for an enriching but very challenging career, whether at sea or elsewhere in the maritime industry with emphasis on the necessity of teamwork,” says Cashman. “I remind students that no matter how good or skilled they are, they can’t stand the watch 24/7; they have to rely upon their shipmates.”

MMA alumni are bound to one another. “They are part of a unique, collective experience,” says Cashman. Whether they think fondly of it or not, he hopes the majority feel they went through a “challenging, tough experience, bettered themselves, and gained confidence in their abilities.”

Those lessons have taken hold among members of today’s Regiment, though, of course, says Cashman, some students take them to heart more than others.

For Midshipman Dylan Gooch, “The Regiment has taught me the skills of teamwork, people management, and how to reach common goals.”

For Midshipman Dylan Shea, “The Regiment has been critical in helping me develop the organizational skills I will need as an engineering officer.”

For Midshipman Sara Stentardo, only a few months into her study, the Regiment has imbued her with the pride of being part of a unit.

Unsurprisingly, the members of the professional command staff believe with a passion that it is.

More important, though, for these midshipmen in all ranks of of the Regiment, from top to bottom, the answer is also a resounding, “Yes!”█