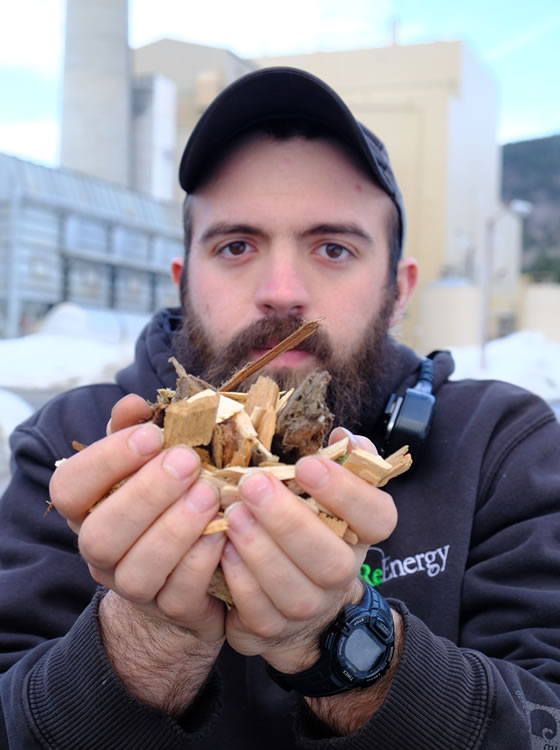 The Power is in their HandsPower Engineering keeps the lights on in the changing world of energy production.

The Power is in their HandsPower Engineering keeps the lights on in the changing world of energy production.
Tyler Paine ’15 holds wood byproduct that fuels ReEnergy’s Biomass-to-Energy, Stratton, Maine plant where he serves as Maintenance Supervisor. The plant generates about 350,000 net megawatt-hours of electricity annually.

For Tyler Paine ’15, a native of Belgrade, Maine, MMA was his first and only choice for college. He knew people who were doing well in the field of power engineering and enjoying it. So he signed up for the Power Engineering Program and never looked back.

“It’s comprehensive,” says Paine. “There’s diversity in the power industry now. The program gives you a good start and gets your foot in the door no matter what direction you choose.”

Upon graduation, Paine found he was in high demand by employers like Siemens and Cianbro. However, he had done both of his fieldwork experiences—a required component of the program also referred to as co-ops—at ReEnergy, a biomass power plant in Stratton, Maine. ReEnergy had an attractive counteroffer.

“So I joined the company I did my co-op with,” he says. “I graduated on a Saturday and went to work on Monday.”

He started as a plant engineer, and today he is Maintenance Supervisor. He says the Power Engineering Program gave him the confidence and knowledge he needed to get off to a great start.

The four-year Power Engineering Program started in the early 1990s in response to industry demand. MMA was producing marine engineering graduates, who participate in the regimental program made mandatory by the U.S. Coast Guard, but was missing out on potential students who didn’t want to go the regimental route.

The program was successful from the start, enrolling 80 to 100 most years and including 118 students this year. Eighty percent are Mainers, and 4% to 5% are women.

The four-year Power Engineering Program started in the early 1990s in response to industry demand.

The program has two majors:

In both majors, classroom studies are coordinated with practical experience in laboratories and work skills.

Overall, the program leads to dynamic careers encompassing a wide variety of jobs and excellent pay worldwide. Recent graduates have taken on positions such as:

“Pretty much anyone who wants a job gets one,” says Program Coordinator and Professor of Engineering Mark Coté ’83. “Entry-level salary for operators at Maine power plants range from $45,000–$65,000 per year. If they work in field service for a company like General Electric or Siemens, or go to a start-up operation for a company like Kiewit, they could be looking at a six-figure salary their first year out of school. They work extremely hard, and they’re on the road a lot. However, they learn a lot.” 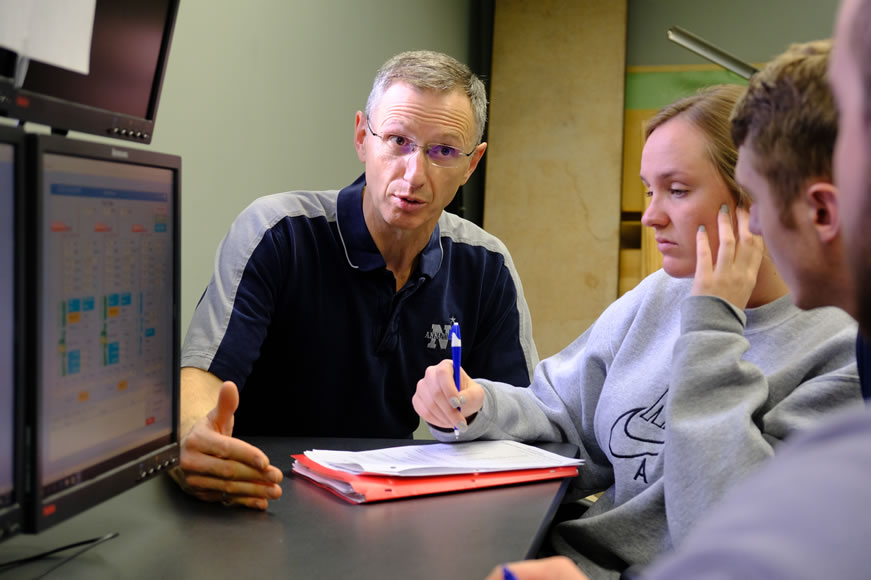 The program starts with the basics: How does a pump work? How does electricity flow through wires and make a motor run? As students progress, they learn how components work together as systems, how systems integrate, how the plant ties into the electrical grid, and how the power is used.

Control room simulators build expertise. The operations in one simulator, for example, are based on an actual 700-megawatt coal-fired plant in Nebraska.

“Our students learn about the boiler, which is almost 15 stories tall,” Coté says. “It has pulverizers that grind the coal into fine powder and motors that are several thousand horsepower and drive fans and pumps throughout the plant.”

Another simulator is based on a 500-megawatt combined cycle power plant site. “They learn about the gas turbines, the support equipment, like cooling towers, and the way the grid ties in and ties out,” Coté says.

Scott Fortuna ’93 was one of the first to go through the program and is Vice President of Operations at Emera Energy in Boston, an energy services company. He’s responsible for the operation of more than 1,400 megawatts of capacity in the U.S. and Canada. Fortuna recalls busy class days at MMA.

“If we had only four classes, that felt like a light day,” Fortuna says. “You had to work for it. You had to earn it. That’s why the rewards are there for alumni.” 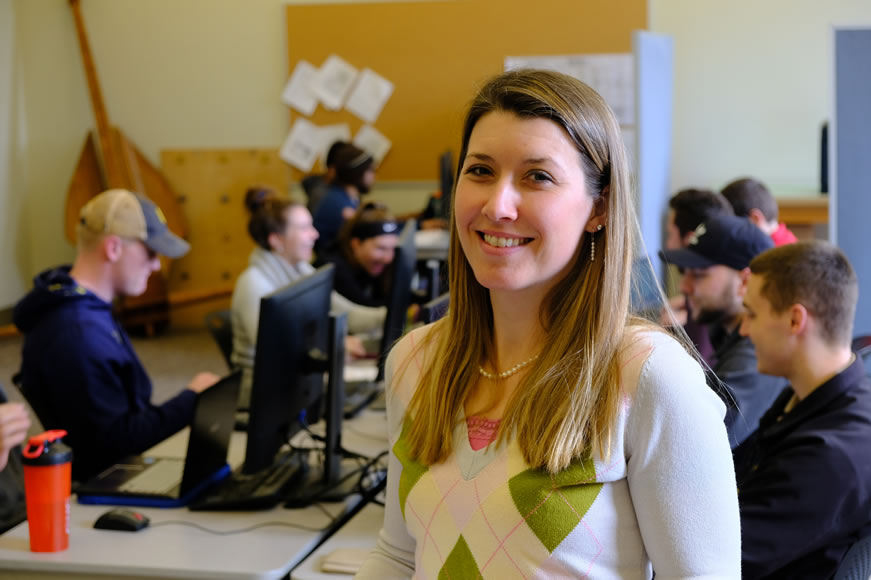 Ferreira is a graduate of the Power Engineering Technology program. Coté was a professor when she was a student and serves as her mentor once more in her new role.

She returned to MMA as an adjunct in 2016 after working for Cianbro, Verso, and Sundog Solar in a variety of planning, engineering, and supervisory capacities. “That speaks to the spirit of MMA and this program. We want to help those coming after us because we care about the industry and we care about the school.”

The program is designed to be relevant to changes in the industry. For example, coal plants are on the decline. Renewable energy—solar farms and wind turbines—is ascending. Natural gas retains a comfortable foothold.

“The biggest thing driving our current industry is the prevalence of natural gas as a fuel,” says Coté. “Back in the ’90s, almost half the power generated in the U.S. came from coal. That’s dropped to less than a third now. Natural gas is now approaching 50%, and in New England, it’s higher.”

An industrial advisory committee helps the program stay on top of trends, and the curriculum and simulators are updated accordingly. The focus is not only on technical skills but also the soft skills graduates need to work in the industry, like teamwork, writing, and public speaking.

“You have to be well-rounded,” says Coté. “You don’t become an operator not talking with anyone. Everybody has to be able to communicate, able to adjust and adapt on their feet. Our graduates still come out technically proficient, but we want to make sure they can adapt. The buzzwords are ‘lifelong learner.’”

The program often has a 100% job placement rate.

The program is well positioned to meet the industry’s impending retirement cliff, he adds.

“About half the people working in the industry are five years from retirement, which means companies are actively looking for new people to come into the field,” says Coté. “Our folks, because of their experience and expertise, come in and contribute right away.”

One of the most critical components of the program is the two paid work experiences that students undertake, usually in the summer. The three-month internships occur after the sophomore and junior years.

The sophomore-year experience allows students to practice the basics.

“They’re tasked with familiarizing themselves with the social environment, safety, and major plant systems on that first experience,” says Easley. “It’s a more general experience: This is the environment, go out there and work, ask questions, draw and describe the systems.”

The junior-year experience asks students to put their courses into practice in a real-world setting by collecting data and analyzing it to solve problems.

“This allows them to become familiar with the systems, operating plant routines, and communication systems,” says Easley. “So when they become operators, they are familiar with the environment, equipment, and systems, and they’re able to troubleshoot things quickly.”

The program was successful from the start, enrolling 80 to 100 most years and includes 118 students this year.

The field experiences are good for employers, too, says Bragdon, whose company hires interns from the program. Students have assignments, projects, and responsibilities, take shifts, do the rounds with other operators, and take part in start-ups and shutdowns.

“Many times, people come into the industry who have only seen things in books,” she says. “They haven’t seen the theory in practice.”

Fortuna recalls his second work experience as a meaningful time when the curriculum came together.

“That’s when it clicked,” he says. “I advise freshmen and the first-year co-ops to be patient because it does seem like a lot of work and they wonder what the payoff is.”

Still, the work experience component is limited by changes in the industry. “The key limiter for us right now is getting enough co-ops for our students,” Coté says. “We send 60 to 70 students out each summer, and we need power plants willing to take them. It has become harder to do that. We used to put eight students at the Verso mill in Bucksport. When that mill shut down, we had to find other places for students to go. That’s a challenge.”

Yet the program often has a 100% job placement rate.

“Our students graduate with six to eight months of work experience the day they graduate,” Coté says. “Companies have found that to be a real hook. They like the fact that students have been in a plant and understand the safety culture, work rules, and the processes to be able to work in the industry. That’s indicated by the number of folks who come to our job fairs and hire our graduates. Coming to Maine is not on most companies’ recruiting plan. So when we get companies from places like Atlanta coming up to recruit, it’s an indication they see something here that they can’t find closer to home.” 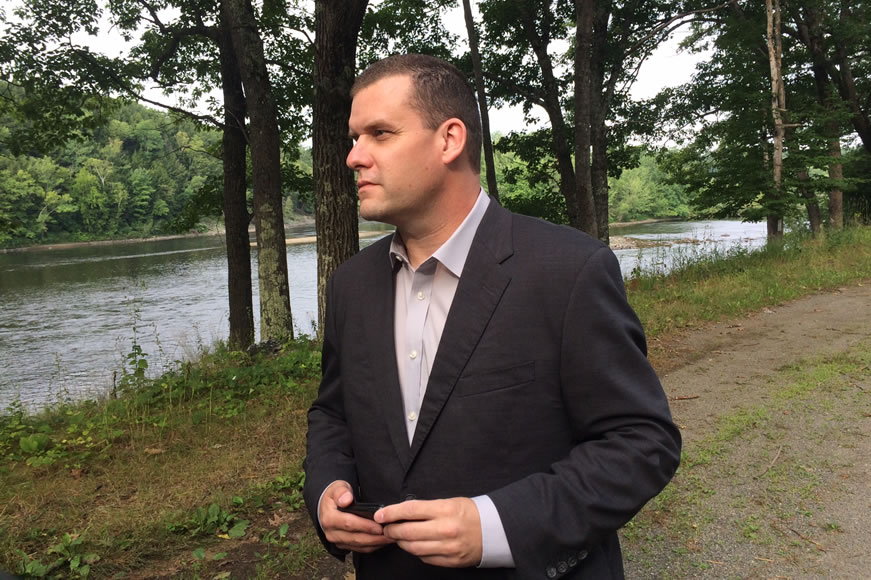 Overall, says Fortuna, the program’s outstanding reputation is based on its ability to place people with value into the marketplace. “Energy production is one of the most important career fields you can choose and a great way to make a living,” he says. “It is an essential part of our lives.

“In Castine, you earn the best foundational education available anywhere.”█

It’s a rarity in the UK for a program to guarantee jobs so I hope to see a Power Engineering Program like this in the UK. I studied a electrical degree and during the course, spent a year in industry for work experience. It was a tough 4 years but worthwhile. I did not get a career path that quick, it was the 90s. I am interested to know of such programs in the UK too as I am looking for a nephew wanting to go and follow an electrical engineering route.

Although I retired from MMA at the end of 2015, I still keep up with the Academy. This article about the Power Engineering programs, what they offer and how they meet student and industry needs was comprehensive and encouraging. It highlights a mature and successful part of the MMA curriculum.
Wonderful article.