The United States Congress continues to support the mission of State Maritime Academies, approving again this fiscal year a significant increase in program funding. MMA President William J. Brennan, who serves as Chairman of the Consortium of State Maritime Academies, says, “This year’s appropriation demonstrates that Congress believes in the value of the Academies and our role in support of economic and national security. Over the past decade, funding for our programs has increased nearly 212%, which translates into direct support for the colleges, students, and maintenance and repair of the training ships, including fuel support for the annual training cruise.”

For the next fiscal year, Brennan added, “I am particularly pleased to report the President’s budget includes funding for the third ship in the National Security Multi-mission Vessel (NSMV) program to replace the aging fleet of training ships with purpose-built modern vessels. This third NSMV is slated to become the new TS State of Maine.” The current academy vessels are aging. The newest is almost 30 years old and the oldest, SUNY’s Empire State, is 56. 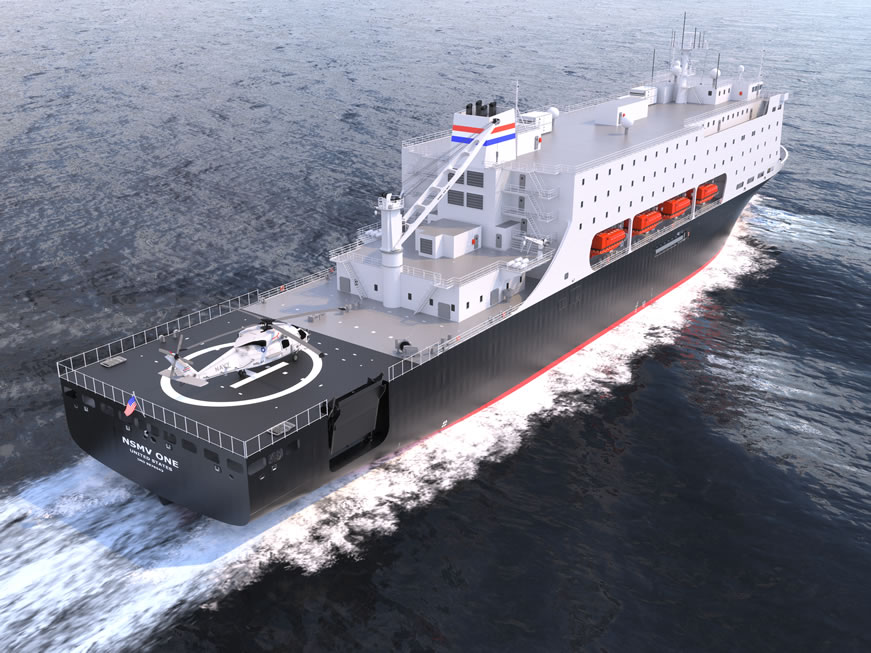 The National Security Multi-Mission Vessel (NSMV) is a MARAD-proposed ship designed as a training vessel for the U.S. maritime academies, the first of which is expected to enter service in 2022.

The NSMV will be a new class, designed specifically for training purposes, with eight classrooms, a full training bridge, lab spaces and an auditorium. The vessel will also be designed to respond to national disasters, as the TS State of Maine did in response to Hurricane Katrina. The ship includes two separate engine rooms providing significant spaces for engine training. Plans call for the ship to berth up to 1,000 people in times of humanitarian need. It will have roll-on/roll-off capability and container storage, full hospital facilities, and a helicopter landing pad.

The third NSMV is slated to become the new Training Ship State of Maine.

The Consortium began the effort to seek support for the construction of purpose-built training ships, working with the Maritime Administration, several years ago. In 2015, the Volpe National Transportation Systems Center conducted an analysis of fleet recapitalization options. Subsequently, federal funding was made available and Herbert Engineering Corporation was hired to design the vessel. Funding for the first NSMV was approved in 2018, and earlier this year Congress approved funding for the second vessel.

“I have been gratified by the depth and extent of support by alumni from all of the State Maritime Academies and their congressional delegations,” Brennan says. “I am especially pleased with the level of support we have received from Maine’s Congressional delegation including Senator Susan Collins who, as Chair of the Senate’s Transportation Appropriations Subcommittee, has had the laboring oar in approving funding for this huge accomplishment.”█