John Webb ’83 was a dogged competitor on the MMA wrestling team while attending the school as a marine engineering major.

“I was never a great athlete, but I was certainly a determined athlete,” he says.

Webb’s perseverance has defined his success and approach to adversity, and he gives substantial credit to his experience at MMA.

“It was a great fit for me academically and socially,” says Webb, “and it gave me the butt kick I needed at that stage of life.”

Webb is a successful trial lawyer with his own practice in Southern Maine, held in high regard by his peers, “and the kind of guy you want in your corner,” says one classmate.

Although he aspired to be a lawyer from the age of 12, Webb calculated that his best chance was to attend MMA for not only self-discipline, but also leadership and learning ability he would later leverage to succeed at the University of Vermont Law School.

“When I graduated I had a ready-made set of skills, and quickly found a job as a mechanical engineer at the Norfolk Naval Shipyard,” he says.

His work initially focused on steam line piping, but he was drawn by the complexity and capability of the Nimitz class aircraft carriers produced by the yard and worked his way into a multi-disciplined field engineering position that allowed him to travel the world and troubleshoot onboard problems.

“I loved, loved, loved every minute I spent on those carriers,” he says. “They’re a fascinating city that floats on water. And I marvel at how great they operate and are still being built.”

But he was eventually inspired to pursue his law degree,

END_OF_DOCUMENT_TOKEN_TO_BE_REPLACED 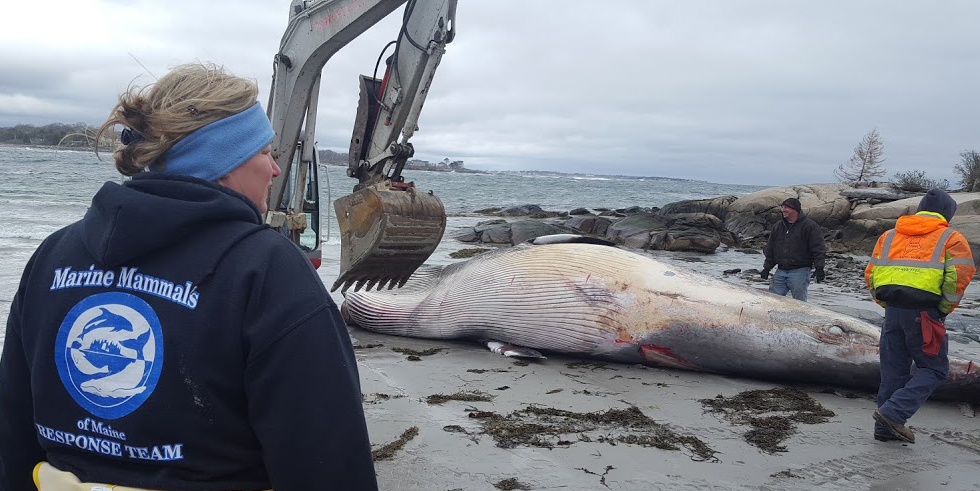 My major was Marine Science, and having the opportunity to be on the water during college and learn more about boats was exactly the reason I came to MMA.
I founded Marine Mammals of Maine (MMoME) in 2011, a non-profit organization dedicated to marine mammal and sea turtle response, rescue, care, research and education that covers the waters from Kittery to Rockland.
The combination of skills I acquired at MMA has helped me to be more diversified when working with other collaborators on marine mammals research projects. Not only can I do the hands-on animal sampling, for example, but I also know how to drive the boat.

With this work you always have to be both ready to go and up for almost anything. Animals don’t strand when it is convenient for us. Working with live and deceased marine mammals, sometimes scenarios can be unpredictable. We deal with many situations, both on land and at sea.

NOAA declared an Unusual Mortality Event (UME) for a few large whale species that are on the east coast within the last few years. This includes Minke, Humpback and Right whales. Part of our role at Marine Mammals of Maine is to further investigate these mortalities.

This past summer a deceased whale about three miles offshore from Old Orchard was reported to our hotline. We received photos and determined it was a recently deceased Minke whale, so we set about to recover the animal for necropsy and testing since its tissues were still in viable condition for sampling.

We took a small barge out of Portland to its last known coordinates.