Dave Cloutier ’95 has lived a life built with intention. Following in his brother John Cloutier’s ’94 footsteps, he decided to pursue an education at MMA, knowing that a bright future would await him if he did. “I was amazed at the value placed on our graduates,” he says. “They roll into their fields armed with knowledge and skill, but they maintain a humble approach and strong work ethic.”

Upon graduation, Cloutier was fully prepared for a career at sea. “I thought I would sail into retirement,” he recalls. “But that plan changed when I met my wife, Anna.”

Together, he and Anna decided that family would be priority, and Cloutier soon began looking for opportunities to work closer to home. In 1999, he took a position at Portsmouth Naval Shipyard. He is now a Group Leader in their Test Planning and Engineering division and considers himself “fortunate to have had a long career at such a historic and proud establishment.”

In addition to professional stability, the decision to stay shoreside has allowed Cloutier to focus on other areas of his life, including raising the family he and Anna dreamed of and spending time in New England’s great outdoors. “Growing up, my dad would take my brother and me to the North Maine Woods for camping trips. They were so full of adventure,” he explains. “I was taught at an early age to appreciate the wilderness and I have ever since.”

Cloutier began sharing that appreciation with his three kids as soon as they were old enough to enjoy it. “When the time presented itself, I brought them to canoe the Allagash and the West Branch of the Penobscot,” he says. Over the years, his love of paddling has only grown. “I really got back into canoeing within the last six or seven years. I really appreciate the peace and quiet of a canoe trip,” he says. After buying a fixer-upper a few years ago, Cloutier began to gain a new set of skills: woodworking. “The house needed a ton of work,” he remembers. “I learned by trial and error as I went about it.” 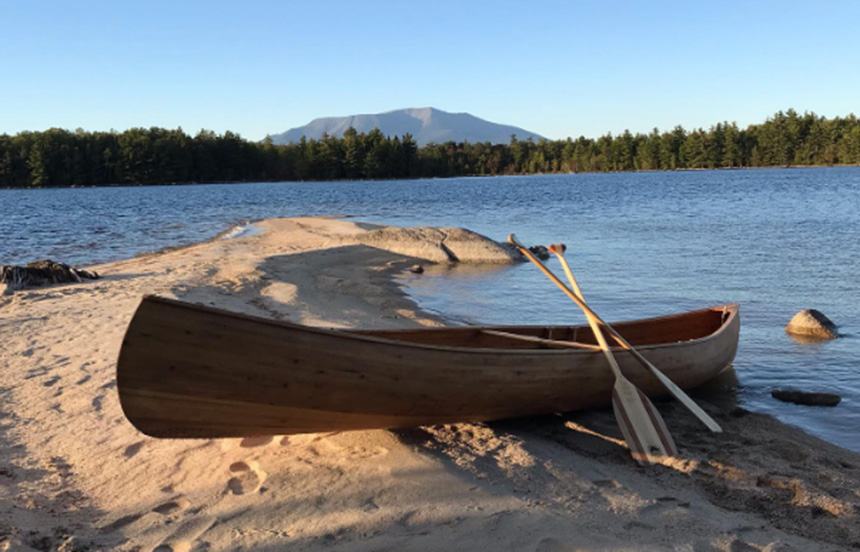 Over time, Cloutier’s skills developed a new way for him to engage with the outdoor world. He connected with like-minded friends on social media and decided to build a canoe by hand. He credits Gil Gilpatrick’s book Building a Cedar Strip Canoe and engaging with other canoe builders for keeping him inspired. “Now I’m restoring a 1930’s Chestnut Chum Wood Canvas canoe which I hope to take on a late fall trip this year,” he says.

In the meantime, Cloutier shares his progress on social media through his YouTube channel and Instagram presence. His followers are fellow adventurers and fans who appreciate his care, patience, and sense of purpose.

“I’ve learned over the years that if you take care of yourself, your family, and your friends, everything else will take care of itself.”█