Pettengill was called away from duties aboard The Contender, a 140-foot, zdrive tug, to help with sea trials for a sister ship that experienced a man overboard incident.
sea stories

I’M A VESSEL OPERATIONS and Technology grad and have been working for Edison Chouest Offshore for the past six years. I’m a mate aboard the Contender, a 140-foot, z-drive tug that’s one of five in the escort class 4517.

We do mostly tanker escort work out of Valdez, Alaska but are equipped to handle oil spill response. We drill often to be prepared. With the tankers, we do tether exercises and emergency tow drills, and with the tug’s equipment we do boom and barge deployment drills.

In April 2018, I was aboard another of the company’s 4517s at the shipyard in Fourchon, Louisiana, that was set to undergo sea trials. As it was fresh from the shipyard, I spent my first day aboard making lists of supplies needed, which included many small items, from shackles to handheld VHFs.

The second day we were to be towed away from the dock out past the jetties by another smaller tug for sea trials. The water depth in port was too shallow for us to safely run our drives, so we were not under our own power. 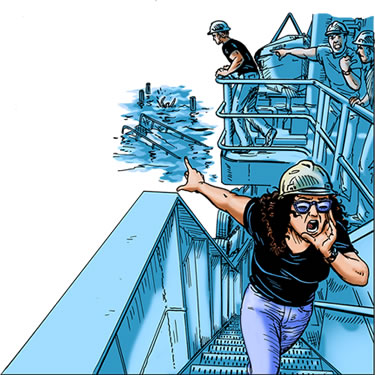 One of the deckhands was directed to cast off the lines from ashore and make his way back aboard via a gangway suspended by the tug’s crane.

We were on this big bend in the bayou where the current rips pretty good, and as soon as he cast the last line and started up the gangway, our tug slipped away from the dock despite the other tug’s presence. The Master was in the wheelhouse on the radio with the other tug telling them, “You need to keep us pressed in. We’ve got a guy on the dock to cast off lines and he needs to come back aboard.”

Too late. The gangway was ripped off the dock, and the deckhand went into the water.

I was on deck, but the only other radio was with the guy who was in the water. I directed one of the ABs: “Stay here and don’t lose sight of him.” I ran up to the wheelhouse to alert the captain, and then I sprinted back down to oversee getting our guy back aboard.

My next thought was to deploy the Jacob’s ladder— but there were no shackles to attach it to the deck.

Luckily, we weren’t far from the dock, and the man overboard swam back to the pier and clung to the pilings. But my biggest fear was that our tug might swing back in and crush him as the other tug tried to regain control of us. Good communication relayed by all parties kept this from happening.

Coincidentally, there was a U.S. Coast Guard cutter in the vicinity, and they launched a rescue boat to assist. By then, we had made the Jacob’s ladder fast, and with their help he was back aboard, unhurt. He did, however, spend the rest of the transit with the nickname Aquaman.

This experience brought home some of the lessons I learned at MMA—to be prepared and know your vessel. I was with a crew that had only worked together for two days, but with the constant training and drills we all go through in the profession, we were able to safely get a crew member back onboard with limited supplies and equipment.█