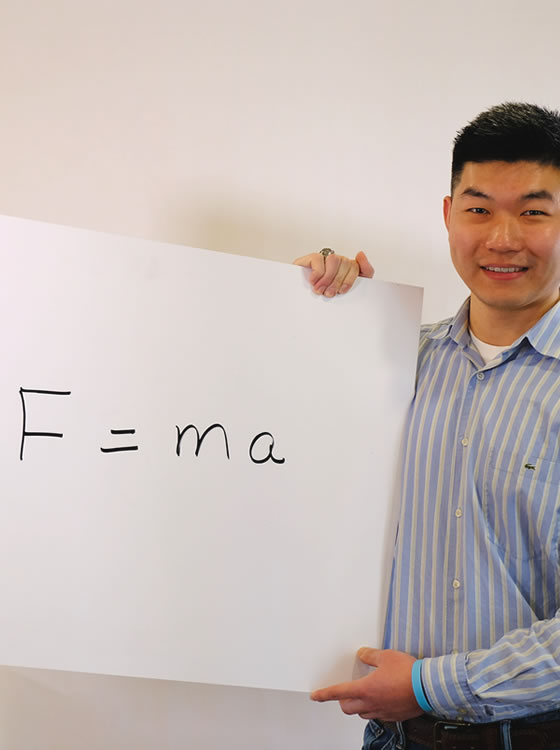 He Has the FormulaEddie Ma’s drive to succeed gained traction with financial support that keeps the gears turning.by Billy Sims

He Has the FormulaEddie Ma’s drive to succeed gained traction with financial support that keeps the gears turning.by Billy Sims

The proof is a long list of Ma’s academic and extracurricular achievements. His personal drive is the force behind it all. But the financial support he receives in the form of two scholarships, the Robert S. Walker Regimental scholarship and Kirsten J. Friberg Memorial scholarship, have proven essential.

“Some people pass through MMA keeping a low profile, but Eddie isn’t one of those people,” says Chris Gilman ’16, a former student mentor.

Learn from the Best

In 2002, Ma immigrated with his family from China to Connecticut where he graduated in 3 ½ years from high school in 2008. He enlisted in the U.S. Navy, trained as a gas turbine technician, graduating at the top of his class, and was assigned to the Seventh Fleet in Japan.

“I was told in tech school if you don’t advance to E5 (Petty Officer, Second Class) within your first contract, you’re not doing it right,” says Ma. “I was also told, ‘Look for the best. Learn from the best.’

“So I had that mindset going into my first assignment, and was lucky two people recognized I wanted to learn and took me under their wing. Within three years, I qualified for Engine Duty Officer and Fire Marshall.” 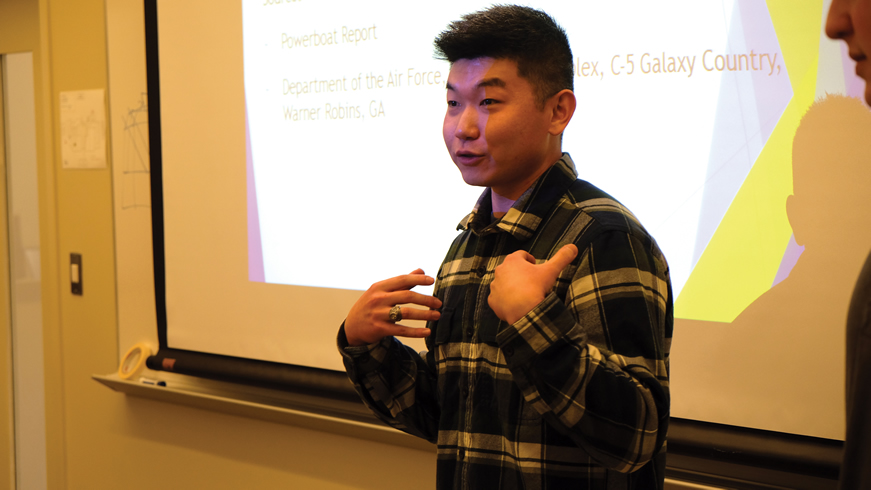 As part of a team in a capstone sytems engineering project, Ma presents how they plan to develop a fluorescent dye marker to aid rescue in man-overboard situations.

At the end of his enlistment, Ma set his sights on attending college. But his family recruited him to help his father start a business fabricating granite countertops and cabinetry. Involvement in bootstrapping the company introduced Ma to entrepreneurial experience—finding a manufacturing facility location, permits, licensing, suppliers, contractors and marketing. The business now employs a team of people who do complete installations, including electrical and plumbing.

With his experience from the Navy and business start-up under his belt, Ma turned his attention to choosing a college. “I had learned how to learn and research, to navigate information,” he says. “I basically discovered MMA from a Google search, and as I browsed the school’s website and saw the marine systems engineering degree program, it seemed like an open door for me, a match for what I had done and what I wanted to be. I came for a visit and fell in love with the setting.”

As it is for most freshmen, especially those who choose the Regiment and challenge of Systems Engineering, Ma found the experience daunting: “I was definitely testing the water,” he says. But by his sophomore year, he became involved in the regimental training staff as a Delta Company Mentor and was chosen President of the Student Government Association (SGA), which soon summoned his leadership ability with the sinking of SS El Faro in Hurricane Joaquin in October, 2015.

The tragedy involved the loss of five MMA alumni, most of whom were recent graduates, and for days surrounding the event the morale on campus was low and grief was high.

“I was in a state of shock myself,” says Ma, “but I kept thinking about what we could do to support students, families and the community.” With MMA staff collaboration, SGA organized a candlelight vigil on Leavitt Hall lawn that brought hundreds together to “bring hope to family and friends, a way for students to pray for those lost, and the lights to guide them back to us.” 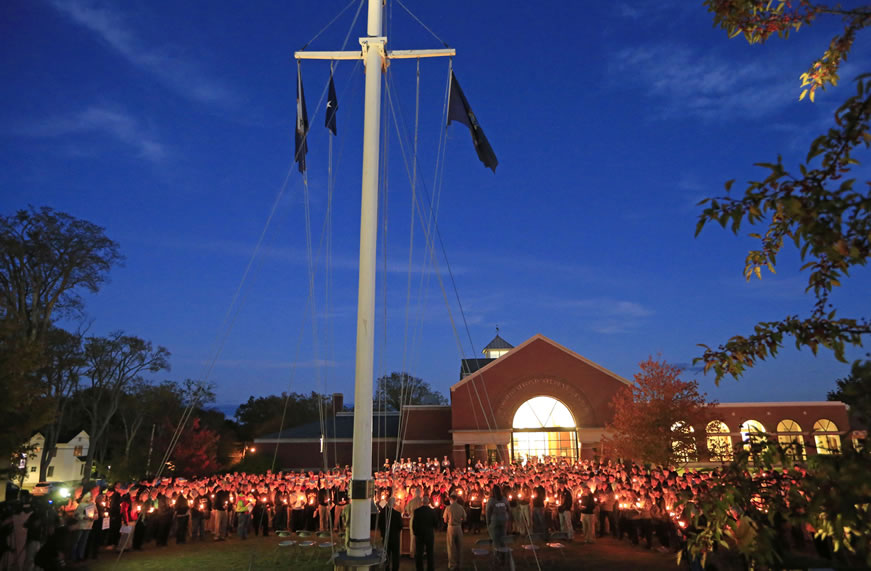 As SGA president his sophomore year, Ma was instrumental in organizing a vigil during the SS El Faro tragedy.

A table was set with photos of the alumni and handwritten signs, “Mariners Forever” among them. Special counseling sessions were offered to students to encourage discussion with faculty and others to share feelings and concerns.

At about the same time, Ma confesses his academic load and extra activities forced him to question whether he wanted to stay in the five-year systems program or change to a less taxing one that would allow him to graduate sooner. He failed a class. “I was too involved in other things and didn’t manage my time as well as needed,” he says.

As when he was in the Navy, he asked a mentor, Chris Gilman, then an MMA senior, for help. “I was able to convince him to stay with the systems program,” says Gilman, “by explaining the long-term value of the program and that his career options would be greater.

“Eddie will be successful at whatever he sets his sights on,” Gilman says. “I was always surprised and impressed by the responsibility he took on—he is a fantastic student leader.”

Dr. Paul Wlodkowski, one of Ma’s engineering professors and also a mentor, says, “While at MMA, Eddie has evolved to be philosophical, yet pragmatic. I’ve observed him develop a passion for understanding the interconnectedness among various engineering disciplines, whether it’s thermo-fluids, structures or materials; yet he has the vision to see it all as a powerful pathway to a career in the global economy.”

As Ma has progressed in his studies, he also has stayed involved in student affairs. In early 2017, he successfully lobbied and helped secure funding for a veterans center on campus, which opened in a wing of Captain Quick Hall on Veteran’s Day.

The center provides a quiet lounge where veterans can connect to discuss relevant issues or work alone. MMA has 23 students who are veterans this year. There were only five when Ma arrived.

One recent afternoon at the center, he talked energetically about what the future may hold for him now that he’s in his final year at the academy. He’s Vice President for the Class of 2018 and hoping to become a surveyor and auditor after he graduates.

“When I look back—and ahead—I have a deep sense of gratitude,” he says. “The scholarships have been meaningful to me, not just financially, but emotionally, knowing that I have done something right.

“That keeps me going and makes me feel honored. At the same time, I want to pay it forward to the next generation of students.

“I love a quote from Jimmy Dean, ‘I can’t change the direction of the wind, but I can adjust my sails to always reach my destination.’

“So I think it’s important to be flexible but know when to focus, do the right thing—even when no one is watching—and keep going. You will succeed.”█ 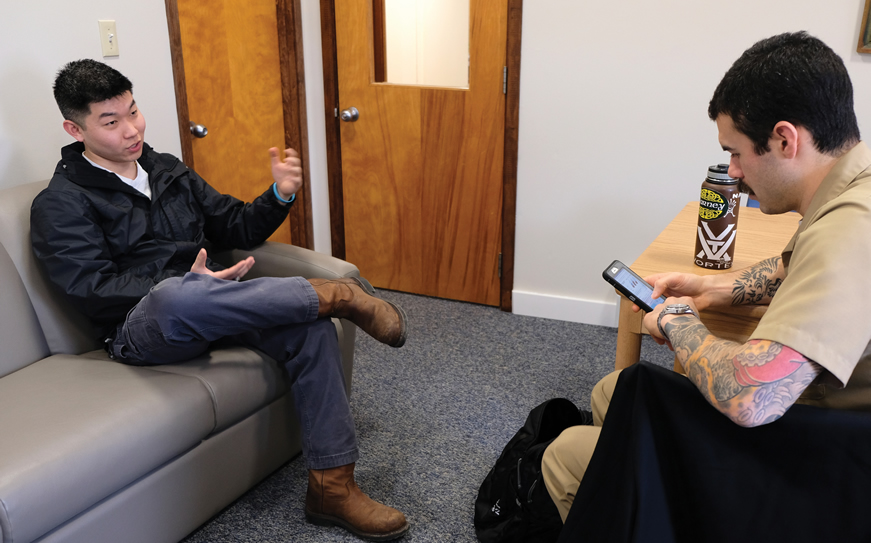 Ma chats with another student military veteran in the new Veterans Center he helped create: “Now veterans have a place to get together to talk about their stories, where they can relax, decompress, and get support.”

Two Donors, One Cause

The impact of scholarship assistance is profound and life-changing.

Of the nearly 300 new students who enroll at MMA annually, 80% benefit from funding assistance. Financial aid is critical to help MMA bridge an estimated $600,000 needed in additional scholarship funding this year.

Part of the motivation for Bob Walker ’53 to create his fund (which had 16 recipients in 2017) is based on his experience as an MMA student. “It was tough,” he says. “Part of the reason I came to MMA was because funding for students (which my family could not afford) was subsidized by the federal government, but halfway through school, the funding stopped and a lot of us were left scrambling for money to finish.” Walker’s father borrowed the funds from a friend, and within months of graduating and going to sea, he says, “I paid him back in full.”

Walker started a small ship repair company in Norfolk, Virginia, which grew to several hundred employees, holding a Master Ship Repair Contract with the U.S. Government. He ultimately sold his company (MHI, Inc.) to his employees. He was also a member of the MMA Board of Trustees for more than seven years.

“If Eddie were sitting here now,” Walker says, “I’d want to learn of his plans and what he wants to do. Then I would just give him the encouragement to go do the best you can—and never give up.”
Sheila Daniel and her husband, Richard Friberg ’61, established a fund in their daughter Kirsten’s memory that is the largest in MMA history. Friberg began his career at age 15 as a cabin boy on a Norwegian freighter and retired as a chief mate in 1999. He passed away in November, 2016. After a career as a mathematics teacher and consultant, Daniel leads an active life working with nonprofit groups, and pursuing hobbies and travel.

“I would offer Eddie the following advice, a saying of Richard’s father,” Daniel notes, “‘Live beneath your means and between your seams.’”

For both Walker and Daniel, their endowments are seen as investments where success is “an opportunity for others to better themselves and our country,” says Daniel. Walker says, “There’s no better feeling—no amount of money you might otherwise earn for your dollars—than knowing you’ve helped someone progress with their life and career with a work ethic instilled by MMA that is beyond reproach.”█