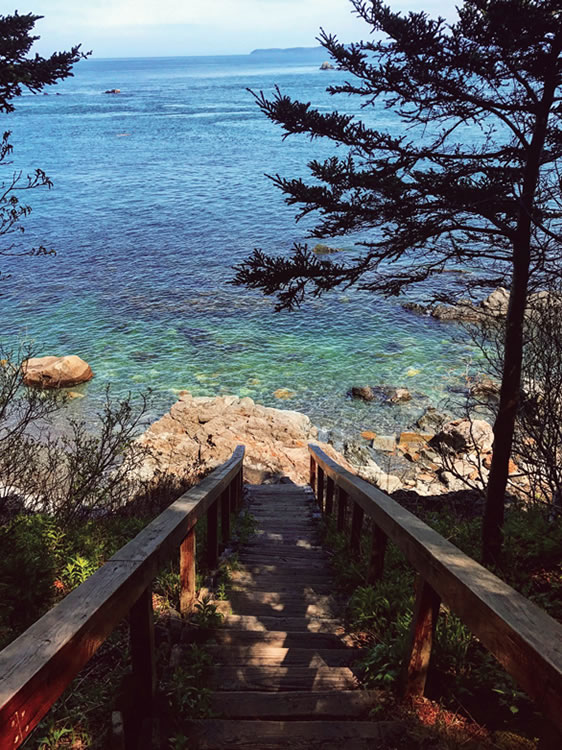 Cruising CastineBy sea or by land, enjoy all the area offers in summer.by Mimi Steadman

Cruising CastineBy sea or by land, enjoy all the area offers in summer.by Mimi Steadman

Fred Atkins ’67 sailed into Castine as a teenager, crewing on a private yacht for the summer. He recalls being smitten immediately. “It’s why I went to Maine Maritime,” he says. In ensuing years, he and his family have often cruised to Maine from their home in Massachusetts, and they always return to his alma mater. “We tour the campus and see what’s new. We use the gym and showers. The kids swim in the pool,” Atkins says. Last summer, he even sailed here for his 50th Reunion. 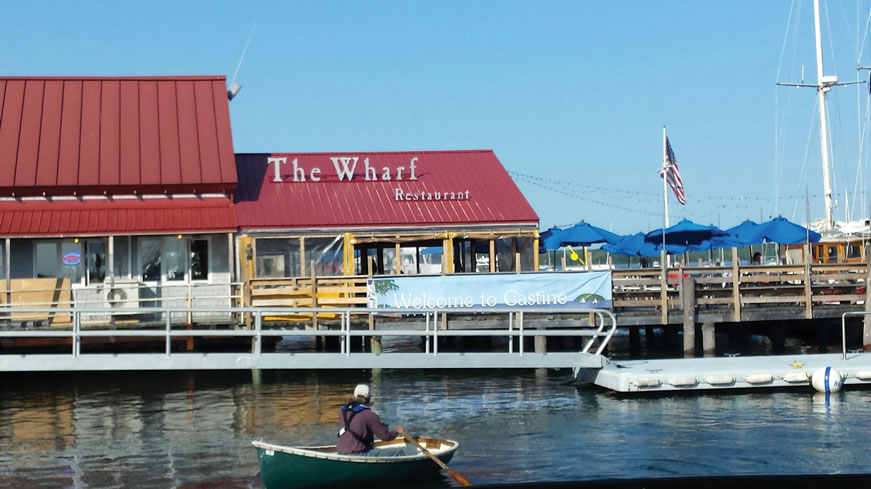 Seafood tops the menu at The Wharf, and there are a half-dozen other options in Castine for dining or take out.

Why not take a leaf out of Atkins’ logbook this summer? You’ll be sailing in one of the world’s most spectacular cruising grounds, with sailing conditions that combine relaxation with excitement. There are plenty of peaceful island anchorages like North Haven’s Pulpit Harbor; timeless fishing villages like Port Clyde; and charming towns like Rockland, known for dining, shopping and art. And then there’s Castine, steeped in history.

Come by sea or by land. Rekindle your MMA memories and discover a new perspective on your old stomping grounds.

As an alumnus, you’re welcome to use an MMA mooring at no charge, whenever available. Reserve in advance, especially in high season (Derek Chase: 207-326-2364). Unlike moorings, MMA dockage is rarely available. If you must be alongside, contact Eaton’s Boatyard (207-326-8579; cash only), which also offers moorings, fuel, repairs, showers and lobsters. The Visitor Center beside the Town Landing has helpful info, plus restrooms (no showers). The harbor is especially busy during the annual Retired Skippers Race (August 18), and the Castine Classic Yacht Race (August 2-3). The latter, plus a Camden-to-Brooklin race (August 3), feed into the Eggemoggin Reach Regatta (August 4), when stunning classics round the marks outside Brooklin.

If you’re arriving by land but want to get out on the water, book a sail with Zander Parker ’04, who offers several daily trips aboard Guildive, a 1934 William Hand-designed motorsailer (207-701-1421; castinecruises.com).

Touring the campus is a great way to reconnect with MMA. To book a tour, contact the Office of Alumni Relations (207-326-2337; alumni@mma.edu). After T/S State of Maine returns from her annual cruise in mid-July, you can also check with the office to learn if on-board tours are available, typically weekdays through mid-August. For info on reunions and Homecoming, contact Alumni Relations as well.

For nostalgia’s sake, stay at MMA. Choices range from Curtis Hall dorm rooms ($60), to Leavitt Hall’s hotel-style rooms ($85-125), to one-bedroom apartments in Graduate Commons ($125). There’s also space for one RV hook-up (Rachael Iannoli: 207-326-2283; rachael.iannoli@mma.edu). The Pentagoet Inn, just up from the harbor, offers charming guest rooms, a pub/wine bar, and fine dining (207-326-8616; pentagoet.com). Across the street at the Castine Inn, guest rooms blend period details with modern amenities. There’s also a pub, dining and workout rooms (207-326-4365; castineinn.com). The Manor Inn, a 19th-century shingle-style “cottage” on Battle Avenue, has fireplaces in some of its guest rooms plus a pub and restaurant (207-326-4861; manor-inn.com). Most properties offer free Wi-Fi; it’s also available at the MMA library and the town’s Witherle Memorial Library. 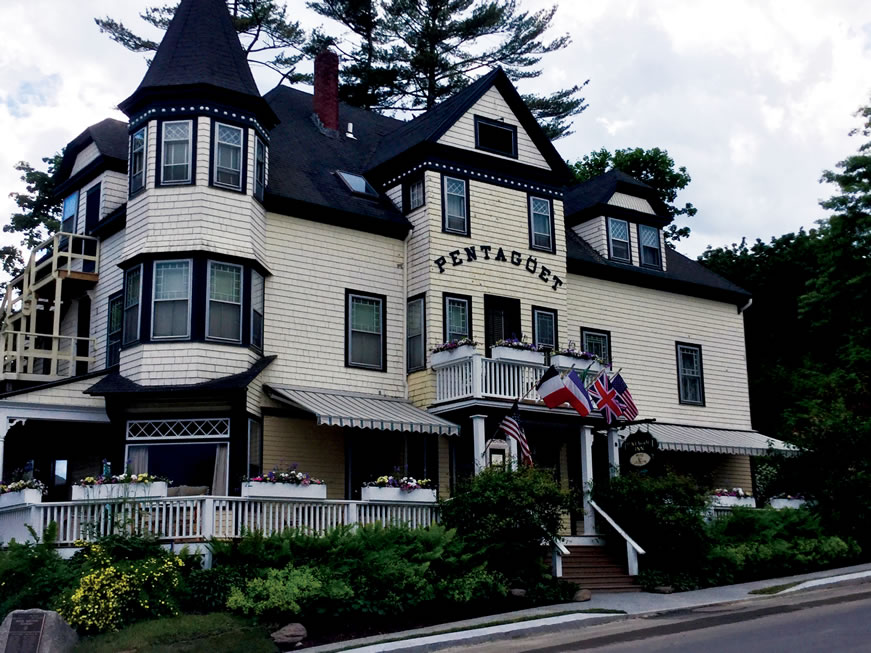 The Pentagoet Inn was home to the first class of MMA students who are commemorated by a memorial plaque to the “Solid 28” in front of the inn, which now offers charming guest rooms, dining and other amenities.

Start the day with a breakfast sandwich, quiche or pastry at MarKel’s Bakehouse (formerly Bah’s Bakehouse) or a full breakfast at the Castine Inn. MarKel’s is a good lunch spot, too, with a chalkboard menu of sandwiches, casseroles and chowders. Castine Variety also offers breakfast, plus lunch options including lobster rolls, sandwiches, soups and ice cream. For pizza and some pool, drop into Danny Murphy’s (formerly The Reef). At The Wharf (formerly Dennett’s Wharf) it’s all about seafood, though there are a few “turf” items, too. And try Dudley’s Refresher at the waterfront (formerly The Breeze). The Manor Inn serves international dishes in its dining room and comfort food in the pub. Dinner at the Pentagoet Inn blends a refined yet unpretentious atmosphere with exceptional cuisine. On Tuesdays, July through September, have a drink on the porch while enjoying live jazz.

After strolling past grand 18th- and 19th-century homes, walk to Dyce Head Light to enjoy harbor and bay views (lighthouse closed to the public). Work out or swim at the MMA gym ($5 daily fee includes showers). At Castine Golf Club (open daily to the public), play tennis (reservations: 207-326-9548) or nine holes of golf (207-326-8844). Nearby, Witherle Woods encompasses 185 wooded acres laced with walking trails, some skirting the sea. The Starr and Virginia Lampson Preserve includes a ¾-mile trail to the Bagaduce River; the Greenbie Natural Area’s trail threads 43 acres of fields and woods; and the Rene Henderson Natural Area has two forested trails. The Hatch Cove Preserve offers a picnic spot near the British Canal, and Backshore Beach, on Wadsworth Cove, has a tidal swimming hole.

Across the Castine harbor in Brooksville, the Holbrook Island Sanctuary State Park (on the island and the mainland) is woven with woodland and waterside trails.

For paddle-powered and two-wheeled sightseeing, contact Castine Kayak Adventures (207-866-3506; castinekayak.com), which rents both kayaks and bikes. Its list of guided paddle tours includes an after-dark trip highlighted by bioluminescence swirling around your paddle.

Listed on the National Register of Historic Places, Castine has more than 100 significant historic sites.

From earliest times, Castine’s broad harbor drew native peoples to its shores. Beginning in the 1600s, European empire builders fought over its strategic location, and by the early 1800s, the flags of France, Holland, Britain, and finally, the U.S. had flown here. Listed on the National Register of Historic Places, the village has more than 100 historical markers explaining significant sites, including Fort George, the largest British colonial fort in North America. Pick up a historical walking map, available at the Town Landing and elsewhere, or join a free, guided walk offered by the Castine Historical Society on Saturday mornings in July and August. The Society’s museum, overlooking the Town Common, chronicles Castine’s heritage through exhibits that include one illustrating the British defeat of the ill-fated Penobscot Expedition. From June 11 – October 8, a special exhibition reveals how early-20th-century Castine summer residents Mary W. Dewson and Mary G. Porter, along with other dedicated Castine women, pursued social reform, public service and political power over the past 100 years. The Wilson Museum’s collections comprise a mix of exhibits on the natural history and cultures of this region.█ 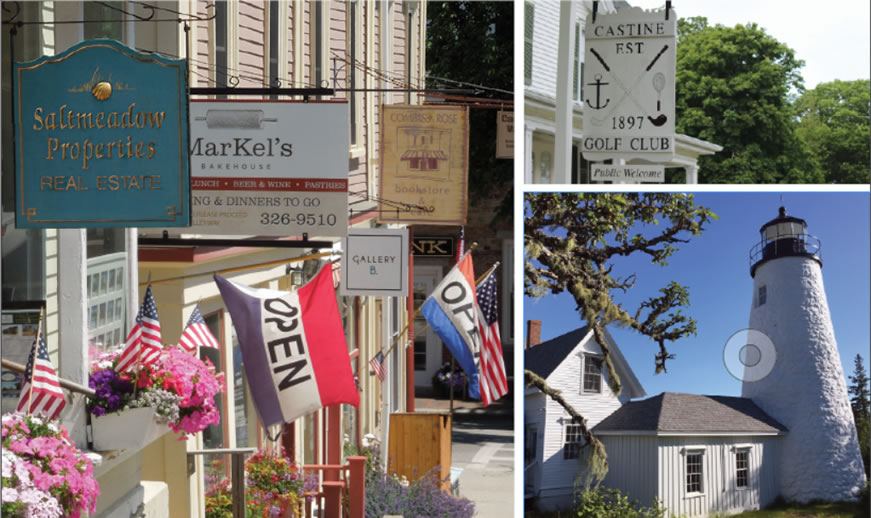