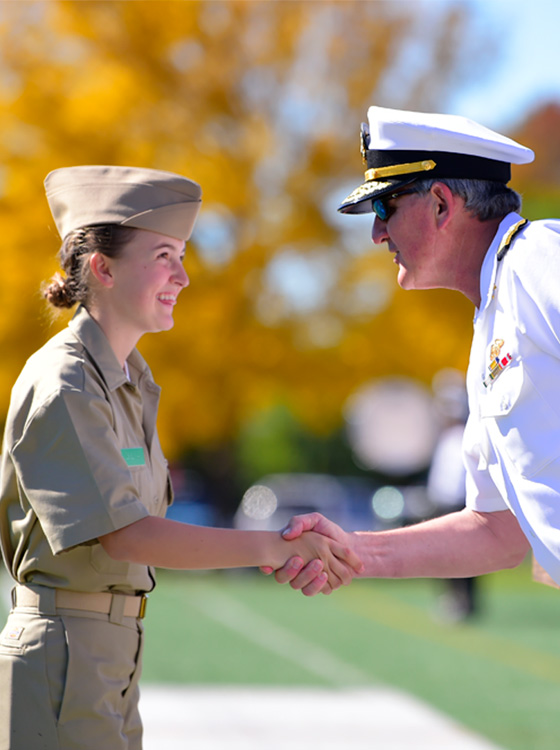 ON A BRISK SEPTEMBER MORNING the newly planted grasses are still wet on Leavitt Lawn as students assemble for muster in the Logan Oakley Field House. There’s one figure who’s been up and hammering away at his computer since before dawn and is now making his rounds, shaking hands with cadets as they take formation. Maine Maritime Academy’s 15th President Jerry S. Paul (“JP” to all who know him) has just begun his first academic year in the top post at the Academy. To be found among the students and supporting them is not a rarity for JP. If asked, it would likely be one of the first goals of his day and it doesn’t go unnoticed. “He is highly respected among the campus as someone we know to be incredibly candid and authentic. He loves to hear from the students about what is going on in their lives,” said Natalie Samuels, Regimental Commander, Marine Transportation Operations, class of ’23.

While the incoming freshmen are new to MMA, JP is not. A 1989 alumnus, he arrived in April 2022 to assume his new role. Between selection and investiture, he spent months meeting with everyone from students to alumni to staff—nearly 400 meetings in all. His goal? A listening campaign that would give him a quick start on his newest challenge. His approach drew praise from Bobby Vagt, former president of Davidson University in North Carolina. “One of the things that impressed me right off the bat, having been in his shoes, is that he got two things right from the beginning. He expressed absolute positivity about the institution’s future, and he had no pretense that he had all the answers.” Vagt and his wife, Ruth Anne, are Castine residents and were some of the first to welcome the Pauls to town.

Marrying in 1988, JP and Kristy spent their first year as newlyweds in Castine while he finished his fourth year at MMA. In the time spanning their departure from MMA and return more than three decades later, Paul has had posts all over the world in both the public and private sectors. One thing has remained consistent—his work in the maritime and energy fields. 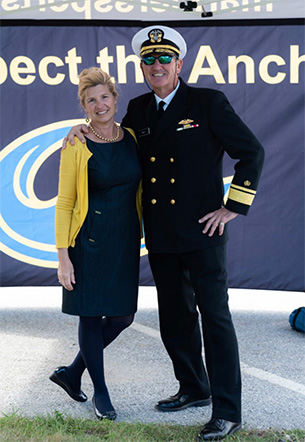 After graduating from MMA, he studied nuclear engineering at the University of Florida and practiced as a reactor engineer at commercial nuclear plants. He then graduated from law school and started practicing law in 1995, during which time he also served as an elected member of the Florida legislature where he chaired subcommittees on appropriations and environmental regulation.

Appointed by the President of the United States in 2004 to run the National Nuclear Security Administration (NNSA) as its COO and Principal Deputy Administrator, Paul oversaw the agency’s nuclear nonproliferation programs, defense nuclear facilities, and the U.S. Naval reactors program. His principle responsibilities were preventing the illicit spread of nuclear materials, technology, and expertise, managing the agency’s $10 billion budget, and overseeing both national laboratories and field offices worldwide. NNSA’s sense of mission—not to mention the responsibilities that came with it—have shaped the lens through which Paul sees much of what happens at MMA.

When first approached regarding the search for a new president, Paul couldn’t help but wonder what it would feel like to visit MMA with the perspective gained through his career. He saw intersections of his past and MMA’s future everywhere. “During my time at NNSA, the driving force was being a part of something that really mattered, not only on a large geographic scale, but in diplomatic relations with countries worldwide. This was a post-9/11 world with technological and resource threats to America. That challenge provided extraordinary motivation for a role that was far greater than just a job,” reflected Paul.

When Paul and his wife began discussing a return to Castine, he reflected on the importance of state maritime academies and their role supporting America’s strategic interests. He is quick to relate the importance of teamwork to the regimental leadership program at Maine Maritime Academy. “The core mission that makes MMA different from other colleges is that we’re producing licensed mariners that America needs for its maritime interests, including its national security. It’s worth doing. It matters.” His oft-repeated refrain is “We ARE Mariners. We MAKE Mariners. We are THE Mariners.” Creating mariners is a hot topic among the maritime industry. MMA is answering the increasing demands from Congress and the U.S. Maritime Administration to produce more licensed mariners.

When asked how these new offerings will help students prepare for a future beyond their time in Castine, Paul is bullish on the shipping industry. “We’re on the precipice of what may be the greatest era in U.S. maritime history. I’d also argue that we can be on the precipice of what could be the greatest era for Maine Maritime Academy,” he said. When asked to state his vision, he does not hesitate in stating that MMA can become “The #1 Maritime College in the World.”

That enthusiasm appeals to Alumni Association President Bill Full. “The alumni are certainly excited to have fellow alumnus Jerry Paul leading the Academy,” said Full. “With his experience, enthusiasm, and energy, we know that, working together, we can face the challenges and capture the opportunities to make the future for MMA a bright one.”

The thoughtful vision for what current students will need to enter a future maritime workforce was important to Maine Maritime’s Board Chair Jason Oney ’96. “It is critically important for any leader to understand what their operational needs are. Jerry went above and beyond—even before he arrived on campus—to familiarize himself with Maine Maritime’s strengths, challenges, and opportunities—internally and externally.”

As the global maritime industry focuses on reducing the environmental footprint of nearly 50,000 ships active on the seas, the International Maritime Organization is beyond mere suggestions of best practices and good ideas. There are mandated rules with aggressive targets to reduce the carbon footprint significantly within short periods of time. As Paul explains, “These rules are now driving a tremendous amount of investment in the private sector to figure out what technologies can help us do that. Concepts range from low-sulphur diesel fuel to ammonia to fuel cells. Liquefied natural gas will probably transition to methanol. All require a technology development to which MMA can contribute and the type of hands-on training that is the MMA brand.”

In reference to MMA’s Ocean Studies program, Paul poses a question. “If we are going to use two-thirds of the world’s surface—oceans—to transport goods and services, can we be better stewards of the oceans themselves? For example, our ocean studies programs have a unique role researching and developing methods for decarbonization.”

“International business and logistics is a field for which MMA’s curriculum prepares our students,” continues Paul. “Throughout the pandemic many people discovered the impact that supply chain backlogs had on daily life. But MMA students are at the forefront of these challenges. The impact of logistics and how we move products from factory to the doorstep went from being an insider’s game to an everyday concern that everybody now values.”

“It is critically important for any leader to understand what their operational needs are.
Jerry went above and beyond—even before he arrived on campus—to familiarize himself with Maine Maritime’s strengths, challenges, and opportunities—internally and externally.”

Diving into the academic offerings with an eye toward preparing the next generation of Mariners hasn’t been JP’s only goal. He’s paying attention to MMA’s culture. He refers to “The Mariner Standard” as a high regard for honor, respect, integrity, and leadership. It’s the belief that working towards a common goal with mutual respect creates better outcomes. He applies this concept of respect to ensuring that the campus culture has equal access, equal opportunity, and respect for the diversity of all persons regardless of gender, race, religion, or national origin. This effort matches the increased awareness of these topics in the industry overall and he hopes that MMA students will be leaders on these topics.

Paul’s examples in leadership cascade into his relations with student leaders as well. RC MTO Samuels offered, “I have been immensely grateful for President Paul’s commitment to his student leaders. He often checks in, gives advice, and has made it clear he cares about what I’m doing by constantly offering his help. I know I can talk to him about what I’m working on and what my long-term goals are. We touch base on what the two of us can do together to make MMA the best college experience possible for those who attend here. It means a lot to me knowing he has my back and is interested in helping me become the best leader I can be.”

As active as Paul is on campus, he remains aware of MMA’s important relationship with Castine. “As an alum I am certainly proud of MMA’s 80-year history. But the town of Castine has been here for 400 years and it has lived through many cycles. Castine always finds a way to rise to a new level and I feel personally that we are entering one of the best phases for Castine. Kristy and I feel fortunate to be here and play a role.” He also says that it is a source of pride to see Castine leverage its history by once again producing a new ship, the National Security Multi-Mission Vessel, on its waterfront.

Paul states that MMA truly is different. He becomes animated as he explains a “get it done” attitude that is intrinsic to the Maine culture and to the core of the Academy. During his recent convocation address, he quoted MMA’s 2022 MMA Scholar Athlete Claire Felix, who said, “We’ve all found a way to do it. That’s what being a Mariner is all about.”

“Greeting students as I walk the path between Leavitt and the waterfront or from the mess hall to a classroom, having a quick breakfast or lunch with a student, or joining students on a sail out to Holbrook Island—that’s the good stuff. That’s the best part.”

He’s passionate about direct interactions with students, and as a former MMA student, feels a deep connection with them. He draws energy from immersion within their ranks. “My favorite part of the job is the students themselves. I experienced some of that with Ken Curtis [11th MMA President, former Governor of Maine, and MMA alumnus]. He was a joy to watch in action throughout campus. I sensed that he wasn’t just doing it as part of the job, but that he thoroughly enjoyed being with students.” The same will likely be said for JP, who is often found among the undergraduates, learning about their work, their challenges and their joys, their student experience, or just the kind of day they’re having. During the recent “ship jump,” after going first into the water, he stayed at the water’s edge and personally greeted each student until the last had finished. “We spoke about the importance of engagement and being a part of what happens on campus. It is something I know Jerry has been passionate about and is actively doing, both in town and at the school, and it shows,” reflected Vagt. 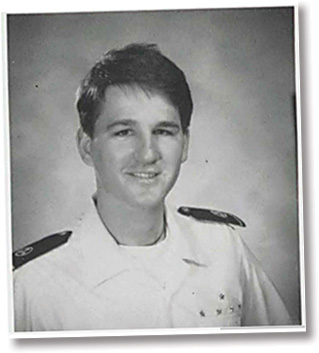 A young Jerry Paul in uniform from his MMA yearbook.

“Well, I have thoroughly enjoyed that aspect here, quite frankly, more than any other,” says JP, who regularly visits classrooms to see students and faculty firsthand. “Greeting students as I walk the path between Leavitt and the waterfront or from the mess hall to a classroom, having a quick breakfast or lunch with a student, or joining students on a sail out to Holbrook Island—that’s the good stuff. That’s the best part.”█