A Leap of Faith Leads to Rewarding Career

CAPT. HOLLY NAJARIAN ’91 took a leap of faith during her freshman cruise and switched from deck to engine, and that leap made a huge impact on the direction of her career. For example, when she first entered the Coast Guard, she was in a marine inspector training billet. Learning ship systems and numerous regulations and procedures was much easier due to her engineering background. 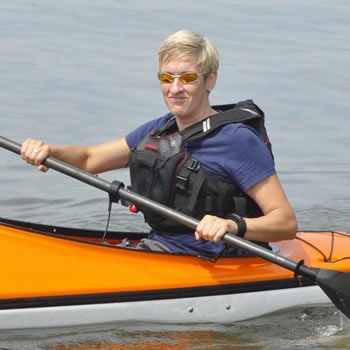 While at MMA, Najarian was involved with the regimental preparatory training, was the Academy’s first female Regimental Operations Officer as well as the first female Navy ROTC battalion commander, played on the men’s lacrosse team, and ran cross country. She remembers that even though she didn’t feel like a “real” runner, Coach Dennis Weeks and his wife Carol inspired her, so much so that she would be running in the dark on the streets of Castine well after everyone else had finished.

St. Petersburg was a challenging tour, but she had the knowledge and Coast Guard staff to make it successful.

It’s not all work with Najarian. While stationed in Connecticut, she earned her black belt in Tae Kwon Do. She currently lives in Florida and is able to enjoy the great weather along with great restaurants. She also runs, bikes, kayaks, cooks and spends time with her dogs. She also looks forward to getting back to Tae Kwon Do.

Since her retirement from the Coast Guard in 2019, she has done some consulting as well as expert witness work on maritime cases.█