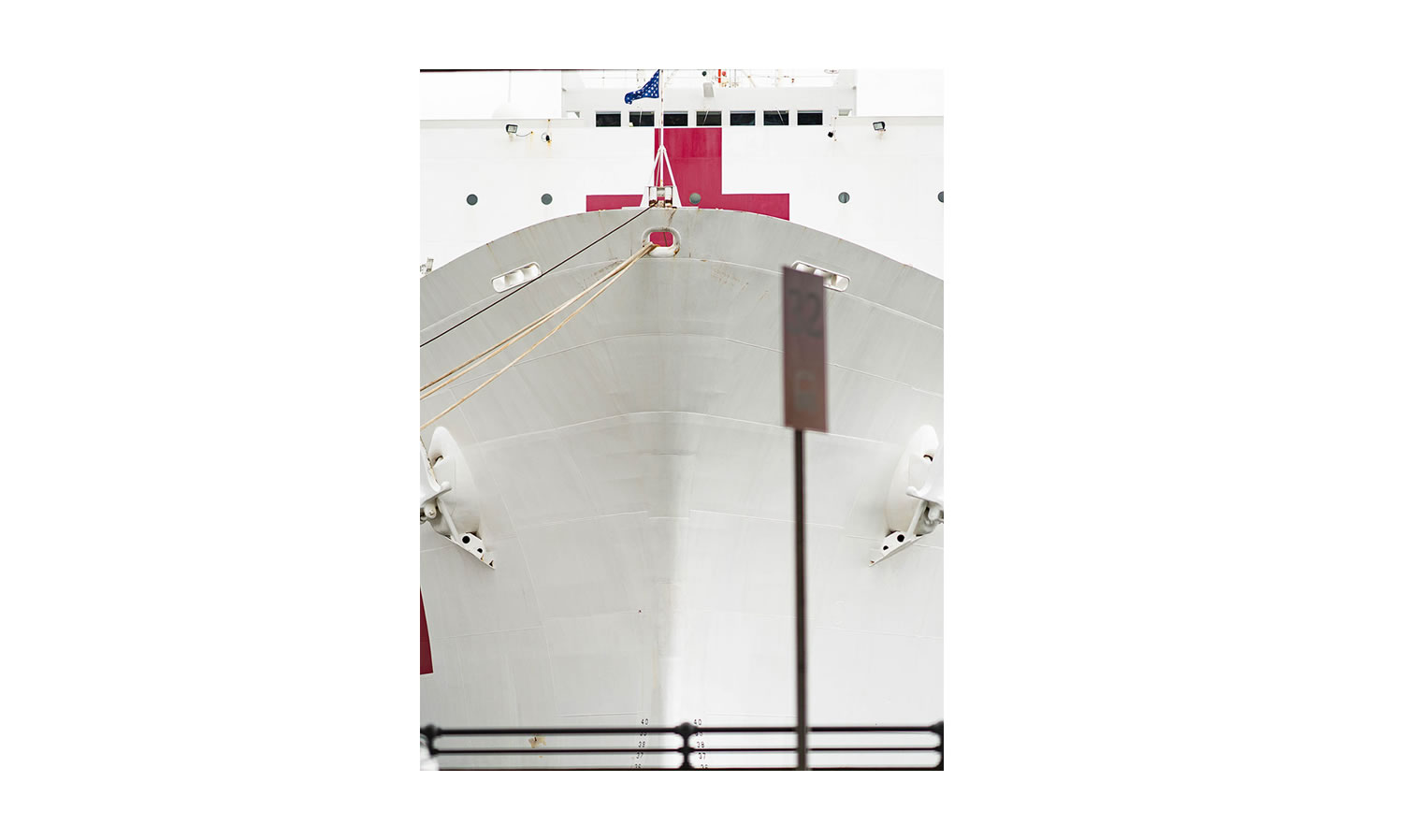 Tale of  Two ComfortsOne was a former hospital ship that became MMA’s first TS State of Maine, and the second is an active U.S. Navy hospital ship with an MMA alumnus in command.by Billy R. Sims

Tale of  Two ComfortsOne was a former hospital ship that became MMA’s first TS State of Maine, and the second is an active U.S. Navy hospital ship with an MMA alumnus in command.by Billy R. Sims

“I was very taken emotionally,” says Jerry Gotlieb ’61, “by seeing the USNS Comfort, (T-AH-20) entering New York Harbor on the morning of March 30, 2020 to provide aid during the COVID-19 crisis. The live TV broadcasts were outstanding and made me very proud.

“As many of my classmates remember,” Gotlieb says, “the first TS State of Maine came to MMA in 1953 after it was converted from the WWII-era USS Comfort (AH-6), a 700-bed hospital ship. Our ship was the second hospital ship named Comfort (the first was a WWI hospital ship).

“The crew of the third Comfort showed exceptional piloting skills entering New York Harbor,” Gotlieb says, and they brought the 894-foot vessel to Pier 90 where it served patients before departing April 30 for its homeport in Virginia to prepare for other potential disaster relief operations. 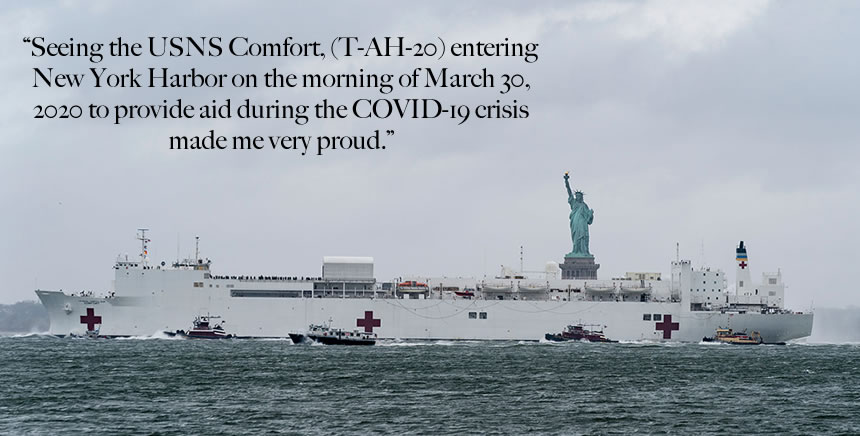 Comfort is under the command of Capt. Andrew Lindey ’86 who has served as the Ship’s Master since December, 2019.

“I was fortunate to be a part of the recent COVID-19 mission in New York City,” he says. “It was stirring to see firsthand the support and appreciation that the city had for Comfort. The last time the ship visited New York City was in response to 9/11.

Comfort was originally sent to NYC to take the burden off of the local hospitals by taking non-Covid patients. “That quickly was modified to include COVID patients,” says Lindey. “It is important to remember that Comfort’s primary mission is to care for young military soldiers with combat casualties. The mission in NYC was much different with very sick, often terminally ill patients who required intensive care and ventilation. I was very impressed with the care that Comfort’s military health care providers gave in New York.”

Capt. Andrew Lindey ’86 has been the Ship’s master since 2019 and is responsible for keeping the vessel ready at a moment’s notice for disaster and humanitarian relief.

Since it was first converted from a San Clemente-class super oil tanker to a hospital ship in 1987, Comfort has provided humanitarian relief and been deployed to war zones around the world. It is one of two ships converted from tankers. The Navy’s Mercy-class ships, Mercy (T-AH-19) and Comfort, were built in the mid-1970s as commercial tankers. In 1986-87 they became the Navy’s first new hospital ships in 40 years.

The ship and its sister ship Mercy are administered by the Military Sealift Command. Medical facilities include 1,000 beds, a dozen operating rooms, an ICU, laboratory, dental clinic, and more. 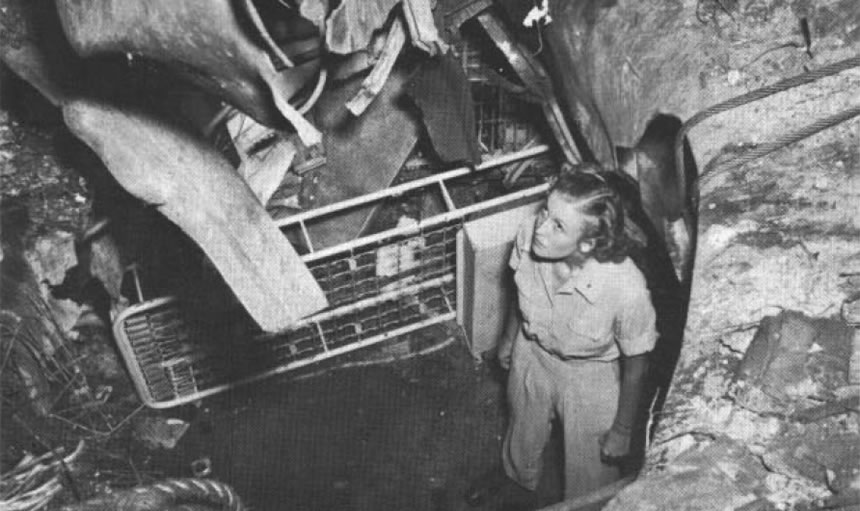 A nurse surveys the damage.

The hospital ships served in Operations Desert Shield and Iraqi Freedom and have responded to Hurricane Katrina, humanitarian crises in the Caribbean and Pacific, and other catastrophic events.

Comfort is currently in a reduced operational status in Norfolk and ready for tasking within five days. The ship is minimally crewed with 60 Navy sailors and 37 civil service mariners. Lindey says Comfort is scheduled to deploy next summer in continuing humanitarian missions in Central and South America.

For Jerry Gotlieb, the TV coverage of Comfort in New York brought memories of the former Comfort that served as an MMA training vessel. 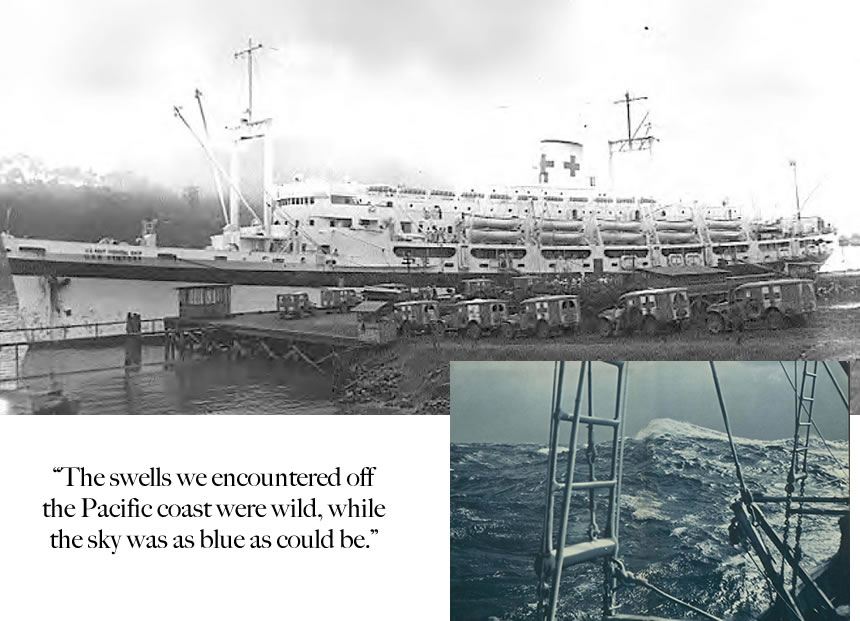 During World War II, USS Comfort was struck by a Japanese suicide plane.

Measuring 417 feet, 9 inches long with a beam of 60 feet, the USS Comfort (AH-6) was launched in 1943 by Consolidated Steel Corporation. The ship was steam powered from two water tube boilers and driven by a single propeller.

Comfort was one of three hospital ships built at the same time, commanded and crewed by the Navy for the Army.

The future training ship of MMA is planned to be a complement to vessels that provide humanitarian aid such as Comfort and Mercy.

The Maritime Administration (MARAD) is currently working with Philly Shipyard in Philadelphia, Pennsylvania to begin building the first of five purpose-built training vessels for the State Maritime Academies. These purpose-built ships will be National Security Multi-Mission Vessels (NSMV), outfitted as both training platforms and disaster response vessels.

The NSMV is a new class of ship, designed with eight classrooms, a full training bridge, lab spaces and an auditorium. In training ship mode, the vessel can accommodate 600 students and crew. The vessel is also designed to respond to national and international disasters, as the TS State of Maine did in response to Hurricane Katrina in 2005.

The NSMV includes two separate engine rooms providing significant spaces for engine training. Plans call for the ship to house up to 1,000 workers and crew in times of humanitarian need. It will have roll-on/roll-off capability, container storage, full hospital facilities, and a helicopter landing pad.

The third NSMV is slated to become the new TS State of Maine, replacing the current vessel, the former USNS Tanner, which has been in operation at Maine Maritime since 1997. 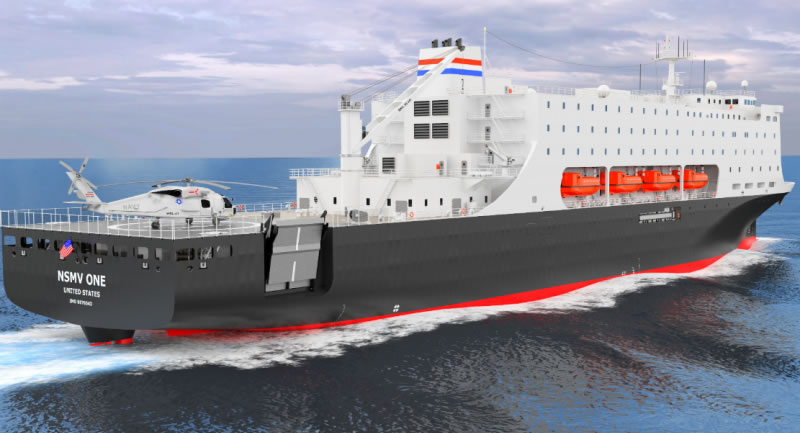 During the war, Comfort served across the Pacific, but in May 1944 was struck by a Japanese suicide plane. The plane dove into the Comfort’s superstructure, smashing through two decks. All but one person in an operating room was killed. Fatalities throughout the ship totaled 28, including six nurses, and 48 were injured. 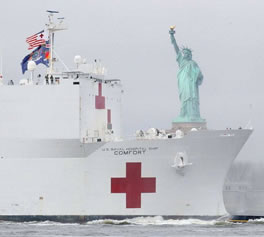 The last time USNS Comfort visited New
York was in the wake of the terror attacks
of 9/11.

Comfort was repaired and sailed on to earn two battle stars and a 20-year career that eventually brought it to Castine and MMA.

According to Heritage of the Sea, The Training Ships of Maine Maritime Academy, by Capt. Walter Jaffee, in 1953, Senator Margaret Chase Smith and Senator Leveret Saltonstall of Massachusetts arranged for the acquisition of the ship for MMA.

In the book, Charles Weeks ’64 observes: “She looked like the old passenger ships. She had a main deck, boat deck and sun deck. Because she was a hospital ship, she had an additional boiler. She was triple on everything engineering-wise and the propulsion was a 4,400 horse Hendy turbine. She’d do about 14.6 if they wanted to hook her up. It made a good training system for the engineers … because you could be steaming on two boilers and playing with a third one.”

During its nine training cruises from 1954 to 1962, the former Comfort called on ports ranging from the Atlantic coast and Caribbean to Europe, South America, Panama Canal and the Pacific.

As a midshipman, Jerry Gotlieb ’61 sailed aboard the ex-Comfort renamed TS State of Maine on training cruises.

“My class made three training cruises aboard the ship—1959, 1960 and our graduation year,” Gottlieb says.

“In 1960, we got to transit the Panama Canal, from the Atlantic side to the Pacific. The swells we encountered off the Pacific coast were wild, while the sky was as blue as could be. The State of Maine would travel down a deep swell, hit the bottom of the wave, shudder and finally climb out of the trough to the next swell. We took water over the bow and sometimes up to the bridge deck. A wild ride in gorgeous sunshine.”

“The State of Maine (ex-Comfort) was a great learning tool, laboratory and training for all our lives ahead,” Gotlieb says.█

Andrew Slater ’12 was Second Engineer aboard the sister ship of USNS Comfort, USNS Mercy (T-AH-19), when it was deployed to Los Angeles in April, serving the same role on the West Coast as the Comfort did in New York.

Until his service aboard Mercy, Slater was steam second engineer aboard Comfort.

“In early March, talk began about activating both hospital ships to combat the Coronavirus outbreak,” Slater says. “The Mercy chief reached out, trying to find ready and qualified engineers to run one of the few steamships in our fleet.

Slater had just come off a five-month stretch aboard Comfort on a humanitarian mission, Operation Enduring Promise, which provided medical aid to some dozen countries in the Caribbean and South America to relieve the burden from local medical providers due to the Venezuelan refugee situation. 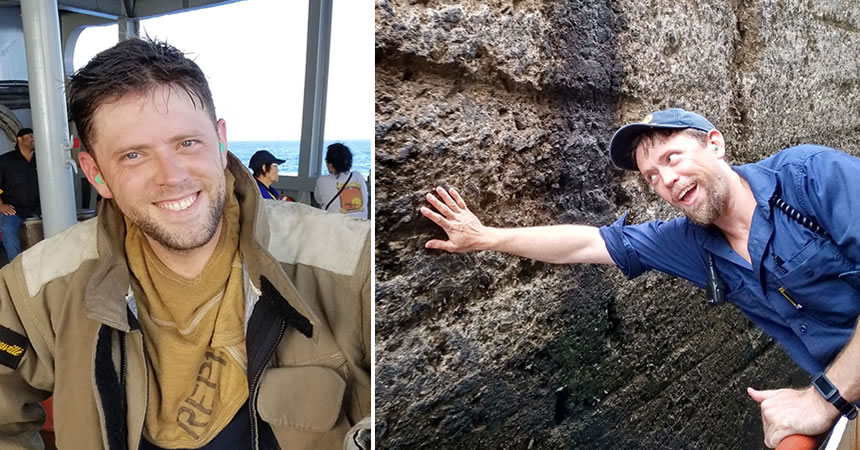 “When we returned to homeport, we rolled right into a major overhaul in the shipyard, and I had to get to work with contractors on needed boiler inspections. After all that, and the long mission, we had wrapped things up in early March, and I had my eye on going ashore.”

Instead, Slater joined the Mercy deployment in LA for three months.

“I’m proud to have been involved with both teams of engineers,” he says, “it was an exciting opportunity for sure.”