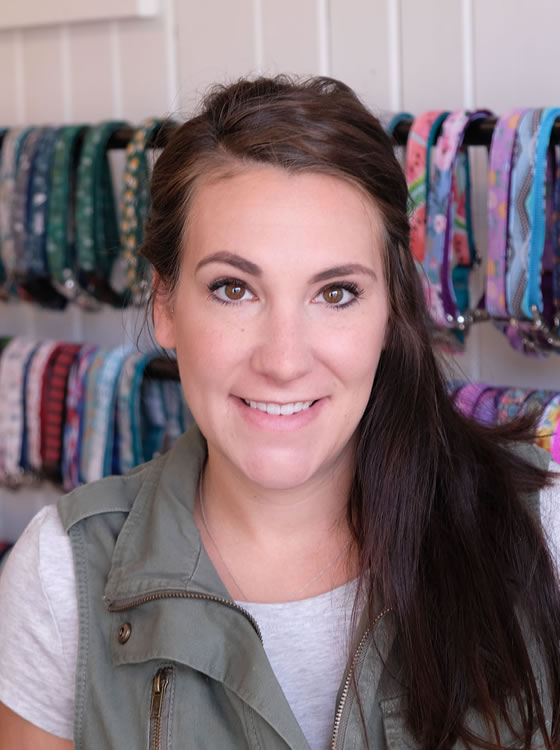 Making It MaineTwo families team up in business to build for their future and their hometown.by Sarah Craighead Dedmon

Making It MaineTwo families team up in business to build for their future and their hometown.by Sarah Craighead Dedmon


Tucked between Main Street and the Machias River, the historic Machias Hardware building had been in the same family for 70 years. When Isaiah Roberts ’10 heard of its potential sale, he knew he had to act quickly. He talked to his wife, Caissie ’13, the owner, then to shipmate Harry Finn ’09.

What began as a straightforward real estate investment has blossomed, putting Harry and his wife Gina along with Isaiah and Caissie at the heart of a Main Street revival for downtown Machias, the seat of Washington County. 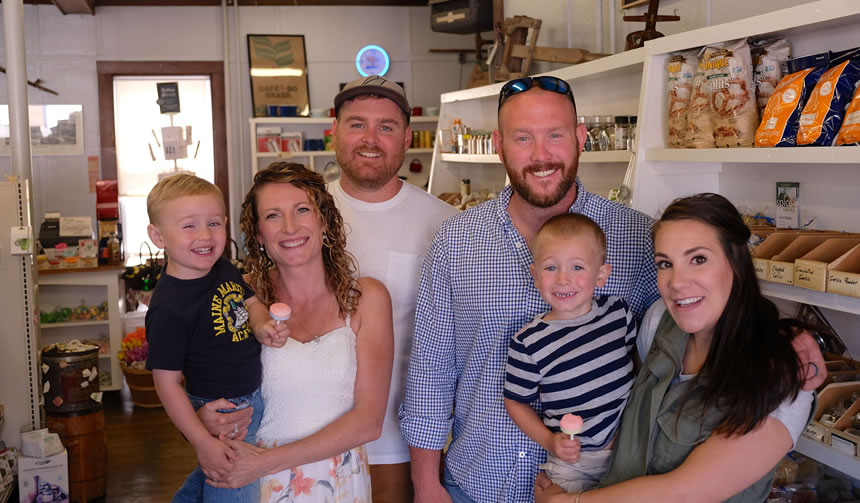 The families of three MMA alumni worked to repurpose a Machias landmark building.
(Left to right) Gina Finn and son with husband Harry (’09), and Isaiah (’10) and Caissie (’13) Roberts and son.

The initial plans to just lease out the building’s vacant storefronts were altered when Caissie’s home-based business hit a tipping point.

“In the middle of the purchase, I realized I was outgrowing my space at home, and having a storefront could bring me up to the next level,” says Caissie, who was an MMA International Business and Logistics major. She chose Maine Maritime Academy because of its strong alumni network and high job placement rate. Although she worked in the insurance and banking industries after graduation, ultimately Caissie put her business degree into action working for herself.

“MMA gave me the foundation to understand how businesses work, things like marketing, and that a business has to grow or die,” she says.

Inspired by her rescued black lab Mia, Caissie founded Sew Fetch Dog Co. in 2016, hand-making colorful custom pet collars, then selling them at craft fairs and on-line. Her idea was a smash hit, and the business took off. At the time, she was almost nine months pregnant with their first child, Lincoln, who was joined this year by baby brother Archer. But parenthood and business have blended seamlessly for Caissie.

“My sales have doubled every year so far, and I’m already on track to do that again this year,” she says.

“Caissie’s business has taken off,” Isaiah says. “It’s amazing how many people are dog collar fanatics.” He cites examples of customers who collect entire dog collar “wardrobes” for their pets.

Gina raised her hand to occupy another of the historic building’s storefronts, turning the former hardware space into a classic general store that stocks everything from locally made yarn, cheesecake, and chocolates to teapots and cast-iron cookware. Machias River General opened its doors in 2019, to the delight of the locals and town officials who have worked deliberately toward a Main Street revitalization for more than five years. 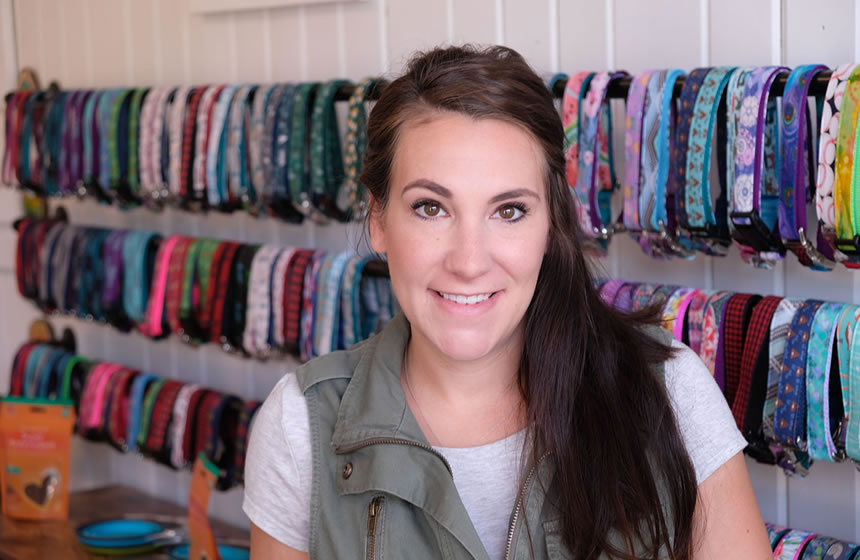 Caissie Roberts’ custom dog collar business began as a part-time online venture that grew quickly and is now located in the former Machias Hardware store, along with a new general store run by Gina Finn and other rental spaces.

“The Machias River General store is one of those unique places that reminds both locals and visitors of Maine’s simpler, laid-back lifestyle and gives shoppers one more reason to visit Main Street Machias,” says Town Manager Christina Therrien.

For many years, Washington County has occupied an unenviable position as one of Maine’s poorest rural counties, owing to many factors including job losses, fluctuations in its natural resources-based economy, and the resulting flight of its young people. With one of the oldest populations in Maine, county stakeholders recognize the region’s recovery is tied to drawing young people back.
The statewide media has taken notice, too. Both couples were featured in a 2019 Mainebiz article titled “Machias Makes a Comeback, After Decades of Decline,” and Sew Fetch Dog was showcased in a Bangor Daily News holiday gift guide and Down East Magazine’s Maine Made Pet Gear guide.

While Caissie and Gina manage their businesses and the building, which also includes several rental office spaces, their husbands go to sea with Diamond Offshore Drilling—Harry as second assistant engineer and Isaiah as first engineer. Both majored in marine engineering operations at MMA.

“Harry and I are on the same ship, he’s a day supervisor and I’m the night supervisor, I get three weeks with him,” Isaiah says. “That’s one of the reasons we bought the building together.”

Isaiah and Harry rotate on and off the ship every four weeks, giving them roughly half a year in Washington County where they were both born and raised. It was the combined allure of traveling the world while putting down roots at home that drew them to become marine engineers.

“With Diamond, I’ve been to the Canary Islands, South Korea, Brazil, and around the U.S. Traveling is fun, but at the end of the day there’s no place that I’d rather be than Downeast Maine,” says Isaiah.

There is a huge demand for engineers and it’s only going to grow, too, with only six maritime schools in the country.

Harry agrees. With Gina expecting their second child in February, he says he’s especially excited to return from sea and soak up as much home life as he can.

“I like hanging out with my family, and I like to go fly fishing as much as I can,” he says. Harry owns another investment property with yet another fellow MMA alum, Mark Patryn ’09.

To build his own local business, Isaiah started Picket Hill Land Services in 2014, offering gravel work, land clearing, and firewood delivery services, among others. Since that time he has been slowly purchasing heavy equipment, with an eye to one day running the business full-time. When he’s not at sea you’ll find Isaiah in the cab of a dump truck, a skid steer, or one of his two excavators.

“He has to work or he gets crazy,” says Caissie. “His offshore job has provided him the opportunity to build his business here.” 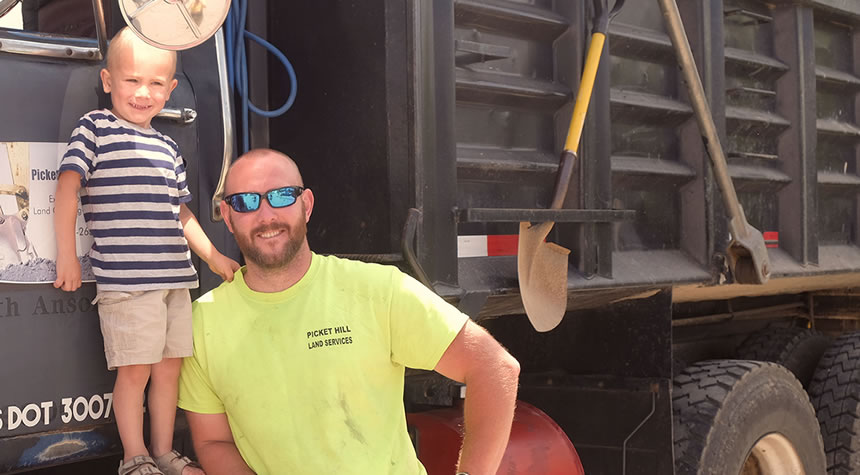 Isaiah ships out, but when ashore does excavation work, sometimes under the supervision of son, Lincoln.

“It’s just me right now, but hopefully I’ll grow it every year so eventually I don’t have to ship out,” Isaiah says. “It keeps me pretty busy. I hire local help whenever I need a hand.”

In addition to building a secure life for his family, creating local jobs and supporting local businesses are top priorities for Isaiah’s business. In the beginning, he did his own mechanical work, another skill set he picked up at MMA. Now that his business has grown, Isaiah pays another business to do the maintenance.

“I don’t mind taking it down to the local garage because it’s putting more money back into the pockets of people who live here,” says Isaiah.

Isaiah, Caissie, Gina and Harry are bullish on the future for Machias. They say investing in their hometown feels good, but it’s also smart business because Machias is revitalizing all around them. Next door, Machias Savings Bank has just completed construction on its new, multi-million-dollar corporate headquarters. Smaller businesses, too, have opened in Machias this year including a nutrition cafe, and a new yarn shop, which happens to rent the space next to Sew Fetch Dog Co.

“I feel like Machias’ swing towards supporting smaller businesses just keeps getting better, and I think that makes for a tighter community,” Harry says.

With strong demand for marine engineers, Harry and Isaiah say they’re also bullish on the future for MMA engineering grads.

“MMA is a great school. It’s not a school for everybody, but if it is for you, and you make that commitment to do it and get through it, then you’ve literally got everything the world has to offer you once you graduate,” says Isaiah. “You can live just about anywhere from Wyoming to Europe. But for us, it’s Downeast Maine.”█