The deck restoration project is part of a long-term maintenance and care plan to replace Bowdoin’s deck and complete other upgrades that will be easily accessible when the old deck is removed. Upgrades will include: replacement of the main engine exhaust, electrical system improvements, and replacement of the generator. Andros Kypragoras Shipbuilding, Inc. of Whitefield, Maine, will be completing the work. Work officially began October 12th, when the schooner’s masts were removed and the ship was prepared to be delivered to Lyman-Morse Boatbuilding Co. at Wayfarer Marine in Camden. Lyman-Morse is providing workspace and additional expertise for the project. The target completion date is May 1, 2016. The renovation is funded through the Bowdoin Centennial Campaign, a $1.6 million fundraising campaign to replace the ship’s deck and strengthen her endowment. The aim of the campaign is to keep the Bowdoin exploring, sailing, and training for the next 100 years. The latest campaign update: the Hagerty Education Program at America’s Car Museum has awarded $5,000 in funding to Maine Maritime Academy to facilitate student involvement in the deck project. Read the press release here.

Posted on: June 9, 2016
Bowdoin is alongside the dock in Camden this week.  After six months out of the water, she has some swelling up to do – which is coming along nicely.  We are busy commissioning her systems, which include the new refrigerator, the new generator, and the rebuilt main engine.  The installation of the electrical system continues to progress, and we look forward to sea trials next week! 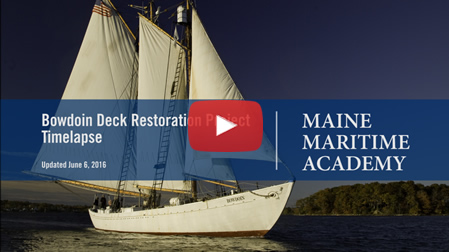