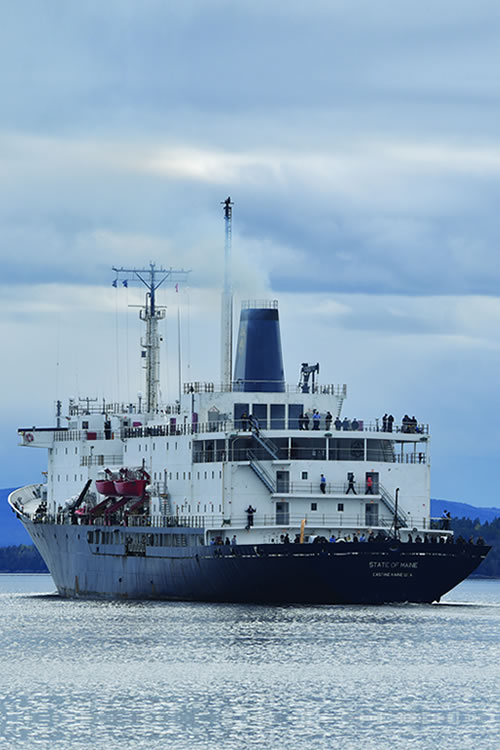 Cruising ClassroomThe 2017 training cruise is underway, and with its return will arrive more capable and confident midshipmen.by Billy Sims

Cruising ClassroomThe 2017 training cruise is underway, and with its return will arrive more capable and confident midshipmen.by Billy Sims

“Now hear this, now hear this…” is the prelude to pipes announcements that are part of life at sea. Just one of a thousand things to which you learn to pay attention—some obvious, some not—like having a sense the ship is turning while underway just by sound and the change in its vibration.

As has been the case for generations at MMA, when this year’s cruise is complete, having carried nearly 280 students, crew and staff to ports from Charleston to across the Atlantic and back twice, the midshipmen who walk down the gang plank will be different from when they departed Castine on May 10.

“They return with more awareness,” says Commandant of Midshipmen, Capt. Nathan Gandy ’92. “In the end there’s a huge transformation.”

After graduating from MMA, Gandy was a naval aviator, specializing in helicopters for 20 years. He was drawn back to MMA after retiring from active duty to serve as Commandant in 2012. He also serves as dean of maritime training. Since his return to MMA, he’s seen more than 1,000 students in the regiment walk the quarterdeck of TS State of Maine (TSSOM).

While the ship is used nine months of the year for various classes, it comes to life with the annual cruise. The cruise mission is to foster professional competence, self-discipline, self-confidence and leadership.

This includes the practical application of learned professional knowledge and skills, experiencing the demands of shipboard life, practicing the teamwork needed for a successful voyage, encountering differing cultures, and working effectively in a shipboard management and organization structure. While requirements and assessments have evolved over the years—certainly since the 1943 class of MMA midshipmen sailed aboard the schooner Mattie—the overall goals are little changed.

“The cruise is when students put into practice what they’ve learned in class,” says Capt. Les Eadie ’76 who has served as Master of TSSOM since 2011. Eadie has the ultimate responsibility for the efficient operation of the ship and the safety of all personnel. His years as a MMA student, Merchant Mariner, MMA Training Officer, Instructor and Master serve his calm approach to just about anything that might happen aboard, “but there’s a lot of things to think about.”

The basic organization of the cruise has 4C (or fourth class, freshmen) cadets aiming for their AB license do 90-day stints on the cruise, with classroom instruction, “a few less than desirable duties,” says Gandy, “and they rotate between deck and engine watches to learn the operation and pulse of the ship.”

(Their second year, they participate in cadet shipping with commercial maritime companies to learn about “real-world pressures and practices,” says Eadie. They also are assigned a Sea Project that Gandy says helps them “learn a new ship to the degree and detail expected of an officer newlyreporting aboard. When complete, they know the ship from stem to stern and all the systems between.”)

Their last cruise aboard TSSOM as 2C (second class, juniors) brings to bear all the classroom experience they have had, be it in simulators, engineering, equipment function, and more. And they’re responsible for much of the operation of the ship, in particular, for training of the 4C cadets.

“When you operate a simulator and it breaks,” says Gandy, “you wait for someone to come repair it. When you’re responsible for the ship and it breaks, it can’t go on and perform its intended mission, and there’s a much bigger cascading effect.

“The cruise serves to bring into focus the accountability and responsibility training they’ve had and demonstrates why it’s important. It bridges the academic to application.”

“But I’ll also be doing celestial navigation training for the freshmen,” he says. “A big part of my grade will be based on how well that training succeeds. So their performance will reflect on how well I do.

“What I’ve learned that applies to the real world is leadership. How to deal with different types of people, how to be in charge of people who are maybe older or have sailed longer than you.”

Gandy says the regimental experience and especially the cruise yields “students who come to recognize the value of holding themselves accountable and to a high standard.”

And whether at sea or land in their chosen profession, they come to appreciate those qualities and “the sense of belonging to something bigger than yourself, which carries throughout your life.”█